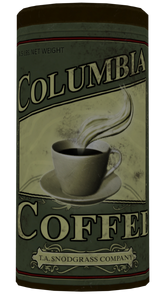 Unlike its BioShock counterpart, Coffee is a comparatively rare find out in the open, though it can be found quite abundantly in lootable places such as trash cans and on corpses. Drinking Coffee will restore a small amount of Salts. Columbia Coffee tins can be found in locations like The Blue Ribbon, the Fraternal Order of the Raven headquarters and the Good Time Club. 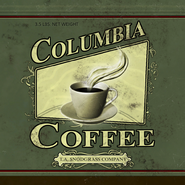