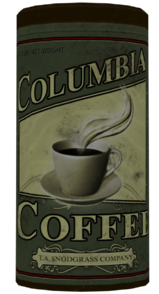 Unlike its BioShock counterpart, Coffee is a comparatively rare find out in the open, though it can be found quite abundantly in lootable places such as trash cans and on corpses. Drinking Coffee will restore a small amount of Salts. Columbia Coffee tins can be found in locations like The Blue Ribbon, the Fraternal Order of the Raven headquarters and the Good Time Club.

A Columbia Coffee tin as seen in-game.
Add an image to this gallery

Retrieved from "https://bioshock.fandom.com/wiki/Coffee_(Columbia)?oldid=315548"
Community content is available under CC-BY-SA unless otherwise noted.