Cohen's (also known as The Garden of the Muses) is a private club located in High Street and owned by renowned Rapture artist Sander Cohen.

While Fort Frolic was open to the public and Sander Cohen's chief place of business and exhibition, he desired a more private setting where he could create without being bothered by the common citizens. With that in mind, he established his private club, open only to local artists, artisans, and those Cohen deemed worthy of witnessing his craft. The club served as an exclusive bathhouse on days with no special events.

Outside the building, men in bunny masks perform an interpretive dance. The anteroom to the club is a cavernous, completely white chamber. From there, a dark bunny mask-shaped tunnel connects to the actual club, a three-story facility decorated according to Sander Cohen's particular aesthetics.

On the upper floor, cameras project images of Cohen's face onto oversized busts suspended via cables alongside giant papier-mâché rosebuds, while albino rabbits frolic amongst the crowds. A winding staircase leads down to the bottom floor where bathtubs are set up around a reflecting pool with see-through glass showing the ocean below. At the center of the pool is a pedestal upon which a subject would stand for Cohen to paint.

Elizabeth informs Booker DeWitt that Cohen may know of Sally's location. Booker has misgivings, but, with no other leads, the two head to Cohen's to speak with the composer.

On New Year's Eve, Cohen is hosting a private production "The Business of Rapture is Business," and the doorman prevents Booker and Elizabeth from entering. The duo head out to the event's sponsors (The Gallery of the Artist's Struggle, The Golden Rule, and Rapture Records) to find the Masks of Invitation needed to enter the show.

After obtaining the mask, they are granted permission to enter. Inside rabbits romp about the club as an accordion rendition of "Waltz of the Flowers" plays. Masked individuals watch as Cohen works on an abstract painting influenced by a waltzing couple (wearing lunar and solar masks) on the center pedestal. All seems to be going well until Cohen grows irate with the uninspired performance, gives a command to Kyle Fitzpatrick, and the dancers are electrocuted. Whether they are dead or just unconscious, the pair is reeled up to dangle above the pedestal.

Booker and Elizabeth approach Cohen and inquire about Sally. The mad artist senses something ethereal about Elizabeth and cautions Booker. However, he admits to knowing the missing girl's location and promises to send them to her provided that the duo dance for him first. The two acquiesce then share a waltz as Cohen's Scherzo begins to play on the accordion. Cohen is, at first, inspired, but quickly grows frustrated at his new subjects' performance and the two are shocked. Cohen delivers a cryptic statement before Booker passes out.

While not encountered during Burial at Sea - Episode 2, the club is still mentioned by one of the female Splicer personas. It's revealed that Elizabeth was one of Cohen's disciples, which explains why, unlike Booker, she does not need a mask to enter the club. 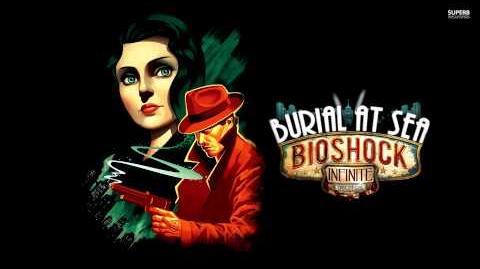 The music played during the sun and moon's waltz.

"The Business of Rapture is Business" poster.

Interpretive dancers outside the club.

The glare of the marquee.

"No entry without prior invitation."

Step into the darkness.

In the hands of a madman.

Sander Cohen is not impressed.