Cohen's Collection was, at a time before Rapture's fall, a group of studios in which Sander Cohen showcased his creative works to the public. As one of Rapture's premiere artists, Cohen produced a wealth of paintings and sculptures, which were divided among the Collections in Fort Frolic, Dionysus Park, and possibly other districts in the city.

When Jack encounters Cohen's Collection during the events of BioShock, the store is in stark disrepair. There is plaster peeling off the walls, and all furnishings have been stripped from the main studio area. The small lobby at the entrance of Cohen's Collection features several objects of interest. Like other businesses in Fort Frolic, its floor is covered with old newspapers and paintbrushes. A large hole directly across from the entrance is a vivid memory of the Rapture Civil War. To the left of the entrance is a painting of skyscrapers drearily lingering above a dull background, perhaps depicting the city of Rapture. The painting rests on a sturdy easel with comfortable chairs on either side. Across from the front desk is a painting of what looks to be some sort of station complete with benches, street lamps, and a hanging clock from the ceiling. Directly across, to the left of the entrance, is a small bullet-marked desk. Resting atop the desk is a thermos of coffee and a box of Oxford Club cigarettes. The only remaining paintings found on the walls are both crooked.

A small doorway leads to the gallery. Four large windows cover most of the back wall, casting an eerie hue upon one of Cohen's plaster works. This particular one depicts a family sitting down for dinner. The father, sitting at the right end, wears a bunny mask and has both his wrists cut. The mother, found at the left end of the table, has her hands tied behind the chair, perhaps to prevent her from leaving during the creation of the sculpture. Her daughter sits across from her with her hands folded in her lap. Both the mother and daughter are bowing their heads, as if in prayer. Most of the plastered corpses in Fort Frolic will bleed when shot at or struck by the wrench. However, the figure of the little girl in Cohen's Collection does not.

Past the table is a set of stairs leading to a catwalk above the lobby. This provides a good view of the gallery. Jack finds three wall safes along the left side of the catwalk. It should be noted that each safe is considerably harder to hack than the one before. Opening the first of these causes a Houdini Splicer to enter the gallery. These safes are being guarded by a Turret hidden among mannequins and paintings. Hacking the Turret can be problematic, as the only way to access it is by the narrow catwalk which provides no cover.

“Jesus, will ya look at this haul! We’re gonna be rich!"
"Oh my yes. If you enjoy slime and muck, it’s utterly divine.”
― Splicers[src]

In spite of the public tensions between Andrew Ryan and Sofia Lamb, Sander Cohen established a Cohen's Collection in Dionysus Park. Though Cohen reveled in bringing his art to a new part of Rapture, the entire collection was ruined when Dionysus Park flooded.

The main gallery contains valuable art pieces and sculptures, a small lounge with a Health Station, and a storage closet is located to one side of the collection. There was also a smaller area down the back of the main space which also lead to the park's basement storage. When Subject Delta first enters the gallery, three Leadhead Splicers are heard discussing the loot from a tipped over El Ammo Bandito in the center of the room. The collection has access to the Chase Carousel in the Promenade as well as Basement Storage. In this area, there is a corpse full of ADAM, and when the player harvests from it, Cohen's Scherzo can be heard playing followed by distant, ominous laughter.

A Cohen's Collection can be found in the multiplayer version of Dionysus Park, which features several artifacts by Sander Cohen. The museum itself has suffered some minor damage.

The Collection's sign can also be found in Fort Frolic.

In this episode, it is learned that Sander Cohen also sold his work in other galleries, such as the Artist's Struggle. A large sign for Cohen's Collection can be seen when Booker DeWitt and Elizabeth are sent to Fontaine's Department Store in a Bathysphere that gives a view of the edge of the city.

An abstract in blue and black. 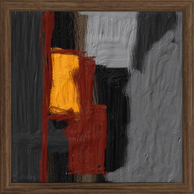 An abstract in yellow and red.

An oil painting by the front desk.

A charcoal drawing of a male nude.

A view of Cohen's Collection in Dionysus Park.

The lounge in Cohen's Collection.