For the citizens in Rapture, see Rapture Citizen.

Amongst the Citizens of Columbia are two opposing factions: the Ultra-Nationalist Founders, who control the city and have a vested interest in Elizabeth and her powers, and the Anarcho-Communist Vox Populi, who seek to overthrow the old regime and ignite a social revolution.

No matter where their allegiance lies, citizens across Columbia fight Booker DeWitt. When he first arrives, he primarily encounters citizens of the Founders party. Booker becomes associated with the Vox Populi out of necessity, but, after trips through various Tears, citizens from that organization turn against him as well.

Citizens of Columbia are divided into three separate social strata: the Upper, Middle, and Lower classes.

The upper-class elite, also labeled "the wealthy", is dominated by the White Anglo-Saxon Protestant community and primarily live in Emporia. Most support the Founders' politics, preserving their privileged class standing. Members of this class include Zachary Hale Comstock and the Fink brothers, Jeremiah and Albert.

The middle class are the small business owners and government functionaries in Columbia. Primarily Anglo-Saxon, with exceptions such as individuals from other European ethnicities and cultures, many being of Catholic descent. The middle class usually support the Founders, but it is not rare for them to be Vox sympathizers or Progressives. The middle class mainly reside in the Town Center and Comstock Center Rooftops. Members include Cornelius Slate, Chen Lin, Mrs. Lin, and Scofield Sansmark.

The lower class consists of the blue-collar working poor, the unemployed, and minority populations of Columbia. The lower class is largely made up of groups discriminated against in the early to mid-Twentieth Century such as Irish, Black, and Asian populations. The lower rungs of society also include a number of Anglo-Saxons who are part of the lower class. This class primarily lives in small enclaves and neighborhood districts, which can exist in any section of Columbia. The largest of these districts is Shantytown, located within the Finkton workhouse. Many of the poor support the Vox Populi, and either indirectly help that group or are a part of it themselves. Members include Daisy Fitzroy, the Interracial Couple, and Ty Bradley.

The lower class are generally armed with low tier weapons, such as batons and pistols.

In the BioShock Infinite downloadable content Burial at Sea - Episode 2 the models used by the upper and middle-class citizens appear in Paris. Not only are these men and women non-hostile, but they're also completely friendly and welcoming to Elizabeth. The clothing they wear is the same as in Columbia but in a more vivid range of colors.

Columbian citizens appear again when Elizabeth returns to Finkton through a Tear in Rapture. Some of them are seen being forced to scrub the floors by Soldiers of the Vox Populi, during Daisy Fitzroy's takeover of the Factory. A few frightened citizens in scientific garbs appear in Fink MFG Research Laboratories, hiding from the Vox in panic rooms.

Columbian citizens are seen throughout the game performing various activities in Columbia. In the beginning of the game, the middle class are mainly seen attending the Fairgrounds and the 1912 Columbia Raffle and enjoying the services of Battleship Bay and Soldier's Field. Workers and the lower class are later seen in Finkton while the middle class is seen fleeing from and being terrorized by the Vox Populi in Emporia and Downtown Emporia.

Model 1: This model is part of the middle/upper class of Columbia. He wears a double-breasted vest with ten brown buttons on the front, no pockets or cinch buckle, over a loose-sleeved white dress shirt with sleeve garters, cravat tie, and imperial collar. His pants are made of tweed with no visible front or back pockets. He wears a black bowler hat and buttoned grey leather shoes. The outfit can consist of a green-black-orange plaid patterned vest, a black cravat tie, blue and black sleeve garters, and brown pants; or a grey vest, a red cravat tie, red and black sleeve garters and grey pants. During the Paris sequence in Burial at Sea, two more color variations are encountered: The outfit consists of a light blue vest, a black cravat tie, orange and black sleeve, plum-colored pants and a beige bowler hat with a black hat band; or a navy blue vest, a red cravat tie, orange and black sleeve, beige pants and a black bowler hat. Their shoes are in a slightly lighter tone of grey.

This model wears a full white tie attire consisting of a dark grey corduroy tailcoat with six buttons, a wing collar white piqué dress shirt with four black buttons with golden rims, matching low-cut waistcoat and platted pants, black bow tie, and leather dress shoes. He can be found in locations like the Fairgrounds and the Fraternal Order of the Raven headquarters.

Model 1: This model is exclusive to the butler at the Fraternal Order of the Raven headquarters in Comstock Center Rooftops and is always paired with body model 2. He is an older pale-skinned male with turtle-like features: he has an oval-shaped head, no jaw-line, double-chinned, a "Roman" nose, perma frown, bushy eyebrows, green eyes, droopy eyelids, pockmarked skin, and wrinkles.

Model 2: This model is very similar to Model 1, with some minor differences. This model wears an Edwardian white cotton lace shirtwaist blouse with a pattern on the chest area, with rolled-up sleeves. Her long grey skirt has a seam at the bottom. She wears a straw hat with a blue ribbon around it, held together with a gold brooch.

Model 3: This model can only be found on Main Street of Soldier's Field and may not appear during every playthrough. She wears a light purple robe with Art Nouveau patterns at the front bottom and on the shoulders, over a black and white striped blouse and a dark violet skirt. She wears a pearl necklace and high heeled brown boots. 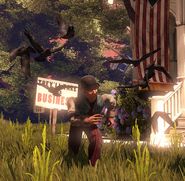 Charles, a Founder, attacking with the Murder of Crows Vigor.

Henry Saltonstall, another Founder, about to board a Sky-Line.

Early concept ideas for various Columbia Citizens, some with deformities, weapons and powers.

Early Female Citizen concepts, when the game was still developed in the Art Nouveau style.

Concept art for the male faces of the Columbian upper class, by Robb Waters.

The style evolution of citizens heads.

The evolution of the style of Columbia citizens.

Citizens on a bench.

Taking in the scenery.

The citizens that appear in the game's title screen.

Exercising on the Beach at Battleship Bay.

A crowd of Columbian pilgrims.

Booker facing off against hostile civilians.

Retrieved from "https://bioshock.fandom.com/wiki/Columbia_Citizen?oldid=318404"
Community content is available under CC-BY-SA unless otherwise noted.