BioShock Wiki
Register
Don't have an account?
Sign In
Advertisement
in: Spoilers, The Founders Party, Vox Populi,
and 2 more

Soldier of the Orient

First Lady's Memorial,
Hall of Heroes (choice only)
OR

“That man has never seen the savage face of war. But he will.”
― Cornelius Slate, referring to Comstock.[src]

Captain Cornelius Slate is a citizen and soldier of Columbia, whose view on the military is based on both elaborate expectations and his real experiences. Once a proud supporter of Zachary Hale Comstock, Slate became disillusioned due to Comstock's falsified war past and was expelled from the Columbian military for calling it such. During the events of BioShock Infinite, Slate leads a rabble of "true" soldiers, who have taken over the Hall of Heroes in Soldier's Field.

A military man, Cornelius Slate served in the United States armed forces and participated in the Battle of Wounded Knee, where he became acquainted with Booker DeWitt (whom he refers to as "Corporal DeWitt"). Some time later, Slate became a follower of Zachary Comstock and a citizen of Columbia. In 1898, during the Spanish-American War, he was among the commanding officers in the Battle of San Juan Hill.[1] Three years later, Slate participated in the Boxer Rebellion in Beijing on behalf of Columbia, where he lost his left eye and 30 comrades who fought under his command. He elected to cover his lost eye with a Pinkerton Badge.

While Slate earned the respect of many of Columbia's armed forces, he later found life in the floating city to be anything but heavenly. He became disenchanted with Comstock after seeing the whitewashed, sanitized display in the Hall of Heroes. However, Slate was most angered by the Prophet's false war record — Comstock claimed to have been present at the Battle of Wounded Knee, and the hero of the Boxer Rebellion, both claims Slate adamantly denied. When Slate confronted Comstock on the matter, he was stripped of his rank, publicly branded a liar, and sent to work in Finkton.[2][3]

Filled with rage over Comstock's actions, Slate escaped and made a truce with the Vox Populi.[4] He led a small team of soldiers to take over the Hall of Heroes, killing everyone in their path (including Leander Manley), defacing the building and monuments within, and changing outside signs to read, "Hall of Whores."

After learning about Comstock's mechanical soldiers, Slate and his men desperately seek to die "as soldiers" gloriously in battle, and Slate considers Booker DeWitt to be the man for the job.

Booker and Elizabeth travel to the Hall of Heroes to obtain the Shock Jockey Vigor. Slate leads Booker to two exhibits within the museum -- the Wounded Knee Massacre and Boxer Rebellion exhibits -- where Comstock features prominently as a war hero. Once Booker and Elizabeth reach the exhibits, they are attacked by squadrons of soldiers, whom Slate sends to their "honorable" deaths.

Slate continues to test Booker, having him destroy Comstock's Motorized Patriots to prove his capabilities as a true soldier. Slate then reveals that he is in possession of Shock Jockey, and creates a series of electric traps while Booker battles a final group of soldiers. With the battle finished, Booker pursues a weakened Slate to obtain the Shock Jockey he needs.

Slate then gives Booker one final order, handing him a pistol and telling him to "finish it". If Booker follows through, Slate's last remarks are about Booker not changing and still being a true soldier. If spared, Slate angrily yells at Booker, calling him a "Tin Man". In the second scenario, Slate is subsequently captured by Columbian authorities and imprisoned at the Good Time Club, where he is found tortured into a catatonic state. Once again, Booker has two choices: kill him or leave him behind. If Booker kills him, Elizabeth will respond with "I guess that's what he wanted". If Booker spares Slate, Elizabeth wonders if his current catatonic state is a worse alternative to death.

In a parallel universe, where the Vox Populi have taken over Columbia, Booker joins forces with Slate at the Hall of Heroes. Together, they tear it down at the cost of their own lives. They are declared martyrs of the revolution, with Booker appearing on Vox propaganda posters.

Slate holds a very high opinion of those within the military due to his own experience as a soldier. He respects individuals who have proven their merit, like Booker DeWitt and Lance Corporal Vivian Monroe. Consequently, he is infuriated that Comstock, a civilian with no military record, would receive "undue" glory for fictitious service in battle, while Slate and his men received little recognition for their sacrifice. More importantly, he is appalled by the Hall of Heroes memorial which he believes trivializes the actual event for the sake of stroking Comstock's ego.

Heavily disillusioned by Comstock's betrayal, Slate has become a fanatic, desperate for himself and his men to die honorably in a final blaze of glory. He, therefore, refuses to allow his men to die at the hands of the Motorized Patriots and instead forces Booker to fight them. His abuse of Shock Jockey results in the Vigor's crystals growing from his skull like tumors, impeding his ability to make rational decisions and exacerbating his delusions, especially after Booker defeats the rest of his soldiers at the Hall of Heroes. He refers to Comstock's troops and Motorized Patriots as "Tin Men" (or "Tin Soldiers") to distinguish them from his concept of the ideal, true soldier. He holds the concept of soldiers dying in warfare as the ultimate honorable end, and freely embraces his death, even so much that if the player rejects the option to kill him after defeating him at the Hall of Heroes, he angrily chastises Booker for denying him an honorable death and equating him to a heartless "Tin Man". Overall, Slate is portrayed as a battle-loving warrior who finds solace and purpose through fighting. 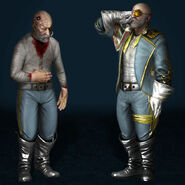 Slate's model in prison and during his first encounter.

Slate's leader card in BioShock Infinite: The Siege of Columbia.

A message from Slate.

Slate under the influence of Shock Jockey, a possible Vigor Junkie reference.

Slate, down for the count.

Close up of Slate's face.

Slate in the prison of the Good Time Club.

Close-up of the lobotomized Slate.