Corpses are the long or recently deceased citizens of the underwater city of Rapture and the flying city of Columbia. 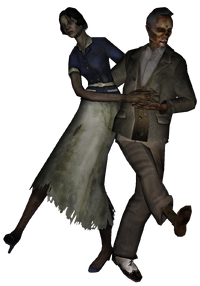 Different enemy classes interact with the protagonist in different ways. A Splicer will attack at first sight, a Big Daddy will ignore the subject unless provoked, and a Security Device will assail the player unless hacked. A Corpse will simply lie in a heap and serves as a set decoration rather than as an enemy. Corpses serve the same function as containers.

It's important to note, however, that Corpses are distinct from the bodies of enemies felled at the hands of the player. The bodies of these enemies will be labeled by their fighting style when killed (Rosie, Spider Splicer, etc.) while Corpses will always be labeled as "Corpse." However, just like any body or container, some Corpses can be used to deal damage to enemies by throwing them with Telekinesis.

In BioShock, Jack comes across numerous Corpses. These men and women met untimely, often tragic ends through excessive splicing, the violence of the Rapture Civil War, Rapture's crumbling infrastructure, or by their own hand. Because of ADAM's special properties, it lingered in the bodies of its users and could be recycled again and again. Many of the Little Sisters encountered can be found drawing blood from specifically placed Corpses.

Corpses become far more important in BioShock 2 and its downloadable content in which they become quest items. ADAM Corpses are Corpses that a Little Sister can Harvest ADAM from and pass on to the player. Subject Delta and Subject Sigma, as Alpha Series Big Daddies, can adopt unaccompanied girls who will guide them to the nearest ADAM Corpse.

There are two ADAM Corpses in this area with two chances to gather them:

There are seven ADAM Corpses in this area with four chances to gather them:

There are seven ADAM Corpses in this area with six chances to gather them:

There are eleven ADAM Corpses in this area with six chances to gather them:

There are twelve ADAM Corpses in this area with six chances to gather them:

There are three ADAM Corpses in this area with three chances to gather them:

There are eight ADAM Corpses in this area with six chances to gather them:

There are seven ADAM Corpses in this area with six chances to gather them:

It's important to note that any model can take the form of a Corpse whether it's a Splicer like Rosebud, Toasty, Crawler, or any of the others; a Big Daddy like a Bouncer, a Rosie, a Rumbler, or an Alpha Series; a Cat; or even a Little Sister. That being said, there are five unique Corpse models. Each of the models looks slightly "mummified."

The different character models for CorpseMale.

The male Corpse of BioShock wears a versatile, slightly casual outfit suited to a number of professions. It consists of a wool, two-buttoned laurel green sport coat worn over an olive sweater vest on top of a grey dress shirt and pair of khaki trousers. The vest has a pair of holes in it and the right leg of the pants has been torn revealing that the cadaver is only wearing one spectator shoe. The body is severely mummified and the skin is a sickly decomposed color. The flesh has receded slightly around the nasal cavity and the lips exposing his teeth. One tooth is missing.

The male Corpse of BioShock 2 wears a similar outfit. This one consists of a three buttoned taupe colored suit jacket over a white shirt, grey pants, and a navy tie with white and blue-gray stripes. Despite it being eight years after the events of BioShock, this body is in better shape than his earlier counterpart. Of note however, is that he is bald, his tie is worn loose, his clothes are soiled, and he has both pairs of shoes on.

One of the Corpse models used in BioShock 2 Multiplayer wears a simple outfit common for lower working class men. It consists of a white shirt underneath a navy jacket, with cream pants and brown boots. The jacket has been badly torn but other than that the outfit is in relatively good condition. Like the corpse from BioShock, this body is severely mummified, with patches of skull even being visible on his bald head.

The male Corpse of Burial at Sea has two head models. He wears a double-breasted vest, dress shirt, trousers, and tie, common of the era. His body is in much better condition that the previous two, appearing to be a few days old at most. There is grime on his trousers, and he has blood stains on his vest and hands. The first head model has greasy brown hair plastered to his head, and he has blood pouring out of his mouth. He also appears to have been bleeding from his right eye. The second model has neater styled hair and a cleaner face than the first, but appears to have been struck across the right side of his face, causing a wound on his ear and cheek.

The different character models for CorpseFemale.

The female Corpse of BioShock wears a fashionable, but largely tarnished outfit. It consists of a pale celadon green, V-neck wiggle dress with a matching belt worn across the waist and padded cap sleeves. Her dress has been shoved up above her knees in an undignified fashion revealing her underwear, stockings, and garter belts. The body is severely mummified and the skin is a sickly decomposed color. The flesh has receded slightly around the lips, exposing her teeth. Two teeth appear to be missing, most of her black hair has fallen away, and she appears to not be wearing a bra.

The female Corpse of BioShock 2 wears an ensemble suited for an office worker or teacher. The outfit consists of a full cream-colored skirt worn under a short-sleeved blue blouse nipped in by a matching cream belt and a pair of matching blue pumps. Despite it being eight years after the events of BioShock, this body is in better shape than her earlier counterpart. The outfit is slightly soiled, her skirt is ripped at the hem and there is a small hole at her right thigh. Her hair is in far better shape.

The female Corpse of Burial at Sea wears an outfit made to match the bar suit from famous post-war "New Look" by Christian Dior. She wears a full skirt, a long-sleeved blouse with a small, nipped-in waist and a line of buttons, and a string of pearls. Her shoes are green and she wears dark brown gloves. It appears she hasn't been dead long as her body is in better shape than the previous two models. Her blonde hair has been hastily tied up and she has a black eye. There is a large cut on her forehead and blood covering her chest and the front of her blouse, as well as dirt on much of her outfit.

This amusingly named model is found only in a few unique locations like the Medical Pavilion and Rapture's Grand Carnival in BioShock. The model takes the form of a nude, horribly burned individual. Unlike other models, which use the charred flesh skin after being set on fire, this model appears naturally scorched from some previous incident. The body appears so badly damaged that it's impossible to determine the sex. 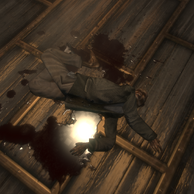 One of the few crispy corpses from BioShock. 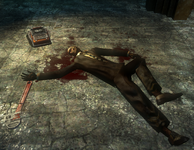 A gathering session about to begin.

A male corpse in BioShock Infinite.

A variation of the previous corpse model.

A Burial at Sea-era female corpse.

A Burial at Sea-era male corpse. 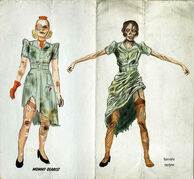 Concept art for the female corpse in BioShock, along a removed Splicer model.

Concept art for a male corpse, seen as an "Angel" by the Little Sisters, by Colin Fix.

The angel wings seen under corpses by the Little Sisters.

A saintly depiction of a Little Sister approaching a corpse for gathering, made by The Rapture Family.
Add an image to this gallery

Retrieved from "https://bioshock.fandom.com/wiki/Corpse?oldid=320247"
Community content is available under CC-BY-SA unless otherwise noted.