The Splicer model Crawler is specific to Spider Splicers in BioShock 2. The Spider Splicers in the first game were known for their uncanny movements and agility, but this model's hideously deformed appearance makes him one of the most truly frightening Splicers in Rapture.

His physical behavior seems more animalistic than other Splicers as he hunches over when walking and crawls about on all fours at times, thus the nickname Crawler.

Crawler seems to suffer more, both mentally and physically, than any other type of Splicer. He suffers from insomnia, delusions and many other problems, probably caused by splicing. Because of this, it seems he has sought a myriad of treatments from Sofia Lamb, as he talks about many of them including the more dangerous Electroshock therapy. It could be inferred that he had to undergo hypnotism with her as well; he speaks normally and calmly while under the Hypnotize Plasmid as if talking to her, and he will also follow instructions that Subject Delta hasn’t given to him, implying that he’s been given the same instructions previously. Judging by some of his quotes, Crawler thinks that Delta and other enemies are responsible for the voices inside of his head, and that killing them is the only effective means of putting an end to the torture.

The following are phrases that the Crawler says in BioShock 2. The name of the source audio file is listed when known.[Audio files needed]

Crawler is the most inhuman-looking Splicer in not only BioShock 2, but of all the BioShock series. He has a bald, misshapen head , a bulging eye, long bony limbs, claw-like fingers, and four toes. His teeth are small and pointy, and spaced far apart in his gums. His clothes are tattered and worn-down, especially at the ends of the sleeves and shorts, likely due to the act of crawling across many surfaces. The Crawler can wear the Blue Morpho Butterfly pin, and in Minerva's Den, many wear glasses with the suit variation. They also have exposed ribs, likely due to skin deterioration and starvation. Their arms are thin and muscular; possibly from them crawling on the ceiling, exercising their biceps. Their legs also look rather robust as well, likely from the same reason as the arms.

Model 1: The primary model wears the least amount of clothing, as it has been greatly damaged over time. He wears loose fitting brown trousers supported by suspenders, the legs torn to above his knees. His grubby vest has also been torn to above his stomach, and is covered in holes. He wears dark green socks with garters over his mutated feet.

Model 2: This model is dressed a lot better than his counterpart, though still in a rough state. He wears a black suit, the sleeves of which have been worn down and various holes cover the legs and arms. His grey shirt is neatly buttoned and his cummerbund is of matching color, he even has a gold pocket watch. The ankle of his trousers appear to have been tapped to tighten them, and he has rope tied around his right wrist. He wears black fingerless gloves and a Broken-Chain symbol adorns the back of his suit jacket.

Model 3: This model is dressed exactly like Model 2, except his suit is light brown. He wears a white shirt with a cummerbund a slightly lighter brown than his suit.

Model 4: This model is also dressed like Model 2, though he sports a cream suit with a matching cummerbund. His shirt is white. 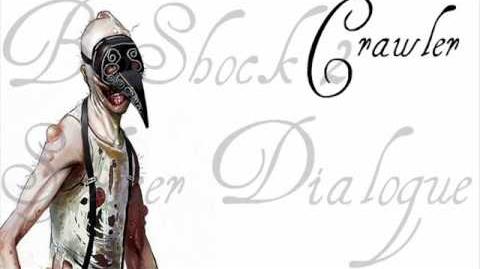 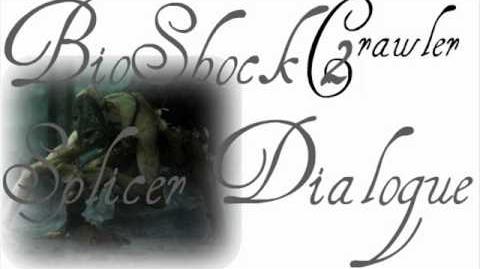 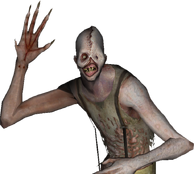 Detail of the Crawler's hands.

A close-up of the Crawler.

A Crawler in Siren Alley. 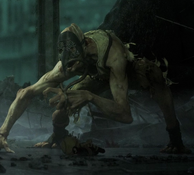 The Crawler as seen in BioShock 2's launch trailer.

The Crawler's character model in the trailer.

Concept art for the Crawler.

Concepts of the Crawler Splicer model from BioShock 2. 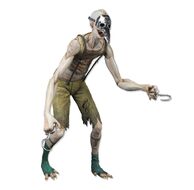