The BioShock series has many animals seen in game, from angler fish to giant squids. These can be seen outside of Rapture roaming the ocean. Others are seen around Columbia. Some of these can be interacted with.

These species of fish can be seen roaming the abyss around Rapture. One can be seen before being eaten by a shark in BioShock 2 when roaming outside of Rapture. Many seem to live in the trench where Fontaine's Department Store now rests. Also, in the multiplayer map Point Prometheus, a poster suggests an extremely large angler fish roams outside Rapture (it is unknown if this is real or an angler fish affected by ADAM). An exhibit for a very large one can be seen in the Proving Grounds.

These anthropods can be seen encrusted outside in the sea amongst the seabed and buildings, and inside areas that have been flooded.

Bees can be found in the Silverwing Apiary at the Farmer's Market. They would have played a vital role in the reproduction of plant life in Arcadia and other vegetation in Rapture. Swarms of these insects can also be summoned by using the Insect Swarm Plasmid.

Some of these insects can be seen in the vents of Fontaine's that Elizabeth may crawl through.

Butterflies can be seen in BioShock 2 at The Sinclair Deluxe in Pauper's Drop, in the lobby and in Room 212.

Corpses of cats can be found all over the city. As of BioShock 2, there have been no record of cats seen alive in Rapture in the series. There is an Easter Egg in Imago Fine Arts, in which a frozen cat corpse can be found with the name "Schrödinger".

Oscar Calraca had many cats smuggled into the city as Ryan would not allow him to bring them in for some unknown reason (possibly due to having them brought in from the surface). One of them was called Mr. Boots, who grew an ADAM addiction which caused Oscar to kill him when he tried to steal some of his ADAM.

Many types of coral of various types and sizes can be seen out on the seabed, on buildings and in other structures. They can also be seen inside areas that have been flooded or have been flooded previously. Contact with ADAM, as with much of the sealife and plantlife in Rapture, has caused mutations in the coral, affecting things like their coloration and size.

These small, red crustaceans have built their residencies all over the ocean floor. Several of these can be seen on the way to Fontaine's Department Store. Ever since the building sunk to the bottom of the trench, crabs have also taken up residence inside of it as well.

A puppy can be heard in the Audio Diary Mind Control Test where she is killed by a young Jack. They are mentioned in other audio logs, character dialogue, scattered canned dog foods, and several advertisements for them can be seen in the Farmer's Market. A Pekingese is mentioned in an audio log regarding the Radar Range.

In a cut concept for BioShock, the Rapture Zoo was said to have housed an elephant.

Fireflies can be seen in jars with the presents left for Subject Delta from Eleanor Lamb in BioShock 2. They can be released by breaking the jar.

Many types of fish are seen in and around Rapture often swimming in schools, such as in Neptune's Bounty or as food. An unknown species of fish can be seen when no-clipping inside the lighthouse at the beginning of the first game, this mysterious fish has see-through skin and can only be seen by cheating. Also, a mutated fish with two heads can be seen in the multiplayer map of Point Prometheus.

Flies are seen flying over food in the cafeteria of Inner Persephone in BioShock 2.

These massive members of the mollusk family can be seen in BioShock and BioShock 2. In BioShock, one is seen when entering the city of Rapture for the first time via Bathysphere. Later in the game, one dead giant squid can be seen in a display case in the Memorial Museum. In BioShock 2, it is first seen when stepping into the ocean (seen after a shark attacks an angler fish).

A type of eel can normally be found at the bottom of the ocean in BioShock 2. It is also seen on a poster under the name of "Monster Eel".

Horse racing was mentioned in passing dialogue by an acquaintance of Booker DeWitt in Market Street.

Jellyfish are aquatic creatures with an umbrella-shaped body, and long, trailing, venomous tentacles. A small group of these can be seen in Burial at Sea, on the way to Fontaine's Department Store. They can also be seen in BioShock 2 when traveling out into the ocean. Some small jellyfish were kept in tanks outside of The Watched Clock.

Albino Rabbits can be found in Cohen's where they are allowed to hop along the club as they please. Rabbits were symbolic to Sander Cohen, and their physical attributes, such as their ears, were incorporated into many of his works.

Rats can be heard in the walls of The Sinclair Deluxe during BioShock 2.

These rodents can be seen scurrying past Elizabeth as she traverses through air vents in Burial at Sea - Episode 2.

A reptile house was mentioned by one of Atlas' followers holding out in Test-Drive. It may hint at the Rapture Zoo, content that was ultimately removed by the time of the first BioShock's release.

Sea horses are a unique breed of fish. Large sea horses can be seen on posters in the multiplayer map of Point Prometheus.

These mollusks can be seen whenever you harvest a Little Sister.

In BioShock 2, they can also be found in the ocean outside of Rapture.

In Minerva's Den the player can find Sea Slugs in glass jars and out in the sea.

Two types of sharks can be seen around Rapture. A medium-sized shark that bears a resemblance to a Great White shark, which is seen in the main menu and after Siren Alley is flooded. The other type is a massive unknown shark that has no dorsal fin, this type of shark is seen eating an angler fish at the beginning of the game.

Cobwebs can be found around the city due to the lack of cleaning being done.

These five-armed creatures can be found all over the sea bed, they are also often seen on buildings and attached to the outside of windows. Subject Sigma removes a starfish from his helmet after coming to from a tunnel explosion at the beginning of Minerva's Den.

Sea turtles can be seen around Rapture, most notably through the viewing windows in the elevators. Also, inside the Memorial museum, a large skeleton of a sea turtle can be seen.

An aquatic mammal normally found swimming around Rapture. Jack's eye is caught by the sight of a whale swimming by as he enters Rapture. Two whales similar to the from the first game can be seen from the windows of High street and Market street. A skeleton of a whale can also be seen in the Memorial Museum in Point Prometheus.

This type of shark can be seen swimming in the distance amongst the towering buildings from Market Street.

Jeremiah Fink's personal credo has him believe that the bee is most admirable, because it spends its time working hard (he also believes that his workers should do the same). Also, a bee manages to get inside the elevator leading down to the Hall of Heroes, and Elizabeth simply opens a Tear to gently shoo it away.

Clusters of these small insects are seen skittering around, often in really filthy areas.

Large black birds usually affiliated with death. These birds can be seen all around Columbia, mostly in the Order of the Raven HQ, where they are worshipped as idols. Crows have been seen to be able to be controlled or produced by the Murder of Crows Vigor; this could be the answer as to why so many crows can be seen around Columbia (possibly because Columbians overuse Murder of Crows). The Columbian Crows are aggressive birds that attack live prey.

Dogs were used by Fink to create a bonding mechanism between Songbird and Elizabeth. All of these experiments failed, but the corpses of the dogs can still be found in Fink's old laboratory.

Flies are often attracted to stenches that humans would normally find offensive. In the Raven headquarters, feasts of vegetables and fruit have been laid out and left to rot, attracting the pesky insects.

A dead gorilla can be found in Burial at Sea - Episode 2 in Fink's old lab. It had been undergoing a series of "bonding tests" using a wire mother.

Horses were originally used to pull carts and machinery during Columbia's earlier years. However, the horses were in danger of falling off the floating islands when spooked by weather and loud noises, so they were replaced by Automated Stallions.

Tiny birds seen hovering around bushes full of flowers. "Hummers", as they are sometimes called, use their long, narrow beaks to sip nectar from flowers. William R. Foreman even made a short film featuring hummingbirds.

Pigeons are often seen flying around the Rooftops of Comstock Center. Getting near them will cause them to fly away (as with most other birds).

Since the people of Shantytown were suffering sadly under the toil of Fink, they sometimes resorted to eating these rodents to keep from starving. Rats can be seen on dinner plates in the slums.

These sea birds can be seen around the Battleship Bay area. It is possible these birds could have migrated accidentally to Columbia or they were brought to Columbia on purpose. On the station near the entrance to Soldier's Field Welcome Center, a bunch of seagulls are hanging around a chair with a Shotgun—implying that they are hunted for sport.

The Angler fish seen at the beginning of the game, before being eaten by a massive shark.

A whale swimming by the viewing windows of Rapture's Market Street.

A bloom of jellyfish.

The Angler Fish up close.

The Angler Fish from the side.

An unknown fish seen under the Lighthouse.

The Giant Squid seen before swimming away.

A pair of squid seen in BioShock 2.

Butterflies seen in The Sinclair Deluxe. 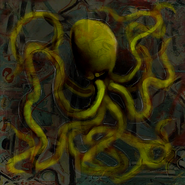 A painting depicting an octopus, found in BioShock. 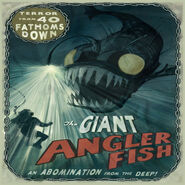 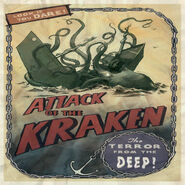 A poster for the Kraken Exhibit. 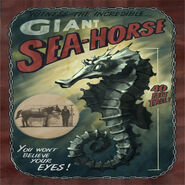 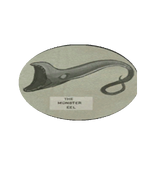 The Gulper Eel seen on a poster. 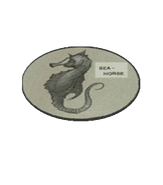 Sea Horse seen on a poster in Oddities Wing. 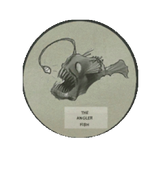 Angler Fish on a poster seen in Oddities Wing.

Concept art for the Kraken Exhibit.

A white rabbit seen in Cohen's

A whale passes by as Jack enters Rapture.

A jar of fireflies.

A Shark in Burial at Sea - Episode 1.

Turtles in Burial at Sea - Episode 1.

An Angler Fish in Burial at Sea - Episode 1.

A horse race form found in DeWitt Investigations on Market Street.
Add an image to this gallery

Model for the gorilla in Burial at Sea - Episode 2.

Models for the dogs in Burial at Sea - Episode 2.

Crow devouring the remains of an animal in the Fraternal Order of the Raven headquarters.

A hummingbird fluttering around the flower bushes.

Dead seagulls seen in Battleship Bay being hunted for sport. 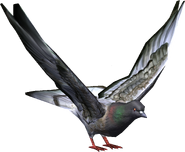 Model render of the pigeon.
Add an image to this gallery

Retrieved from "https://bioshock.fandom.com/wiki/Creatures_of_the_BioShock_series?oldid=320337"
Community content is available under CC-BY-SA unless otherwise noted.