The Crossbow is a weapon that appears in BioShock, the Challenge Rooms, BioShock 2 Multiplayer and Burial at Sea - Episode 2.

The Crossbow is the final ranged weapon obtained in BioShock. It is located in Fort Frolic. It fires single bolts with high damage that are effective at any range. Bolts that are fired sometimes do not break on impact, allowing them to be recovered and reused. Its main weaknesses are a slow rate of fire and reload time. The damage can be increased and the chance that a bolt will break can be reduced with upgrades at a Power to the People station, making the Crossbow an efficient weapon with nearly limitless ammo. Head shots with the Crossbow will inflict 1000% damage against Splicers. Especially with the aid of the weapon's zoom function, head shots kill all Splicers in one hit, regardless of difficulty. It is an accurate weapon that does a significant amount of headshot damage to enemies. The Crossbow appears to have been made out of items found around Rapture, including several rulers and a cigarette case that bears the Le Marquis D'Epoque logo.

Power to the People UpgradesEdit

A Crossbow with the Breakage Chance upgrade.

A Crossbow with the Damage Increase upgrade.

An early concept sketch by Shawn Robertson for the Crossbow.

Crossbow model and concept art, by Mauricio Tejerina.
Add an image to this gallery

The Crossbow returns as a usable weapon in multiplayer, and is unlocked at Rank 10.

A Crossbow with the Piercing Shot upgrade.

A Crossbow with the Damage Boost upgrade.

A Crossbow with the Rate of Fire Boost upgrade.
Add an image to this gallery

The Crossbow makes its return for the second part of BioShock Infinite's story-driven downloadable content, Burial at Sea. It features three new types of nonlethal Bolts: Tranquilizer Bolts, Noisemaker Bolts and Gas Bolts. The main difference between this version and the BioShock version is that it's a pistol-sized weapon, rather than a larger weapon. Also, this version appears to be factory-made as opposed to being pieced together, and seems to be quite new. The player will find the Crossbow in the Ryan the Lion Preparatory Academy, stuck in the door to the cafeteria, which forces the player to obtain it.

Some Splicers, Ryan Security, and Vox Populi Soldiers also use crossbows, but they use arrows rather than nonlethal bolts. These arrows cannot be looted or used by Elizabeth.

Promotional art for the Crossbow in Burial at Sea - Episode 2. 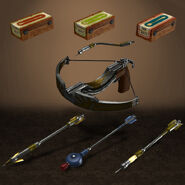 All variants.
Add an image to this gallery

Retrieved from "https://bioshock.fandom.com/wiki/Crossbow?oldid=311755"
Community content is available under CC-BY-SA unless otherwise noted.