Daisy Fitzroy is the intelligent, charismatic, and brutal leader of the Vox Populi.

Daisy was brought to Columbia by Jeremiah Fink who used his contacts on the ground to procure "Negro convicts" for menial labor within the city.[1] Shortly after arriving, she was employed as a housekeeper for Lady Comstock. Daisy admired Lady Comstock, believing her to be genuine for someone on such a high pedestal.[2]

She fled Comstock House after being framed for the death of Lady Comstock, and formed the Vox Populi within a few weeks of her escape. Years later, she was arrested by city authorities in Finkton.[3] 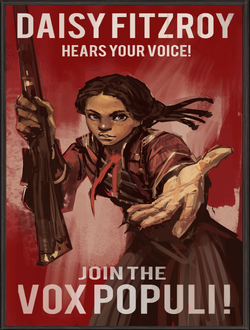 Daisy was then sent to Dr. Francis Pinchot at Comstock House, who interviewed her over a period of a week.[4] After participating in an intelligence test conducted by Dr. Pinchot, it was learned that Daisy had genius-level intelligence, scoring even higher on the test than Dr. Pinchot himself.[5]

As a result of Daisy's interviews showing unsatisfactory results, it was suggested to Dr. Pinchot by his supervisor, Dr. Kittery, that the scientists at Comstock House should perform a lobotomy on Daisy to make her more servile. Dr. Pinchot, by then fascinated by Daisy,[6] felt that the procedure would render her useless and refused, worried that he'd have no choice if he did not show results quickly.[7]

As Daisy's lobotomy was planned, Dr. Pinchot tried to intervene. He was accused of forming a connection with Daisy, and thus ignored. The night before the last of Dr. Pinchot's interviews, he wrote of Daisy's plan to be broken out of the facility and how she requested his help.[8] Dr. Pinchot handed over his keys to Daisy, as well as all the money he had on him. Despite his help, Daisy shot and killed him before escaping.[9]

As the Vox Populi grew more powerful and their ideals became increasingly extreme, Fitzroy sought to destroy the Founders.

After being rendered unconscious and abandoned by Elizabeth on The First Lady airship, Booker DeWitt awakens in the zeppelin to find that it has been hijacked by the Vox Populi. Daisy offers him a spot in their uprising, and when that proves ineffective, demands that he obtain armaments from gunsmith Chen Lin in return for the zeppelin. Upon finding Chen Lin, Booker and Elizabeth discover that he was brutally tortured to death, and Elizabeth opens a tear into an alternate universe. Once again they run into a problem and are forced to retrieve Chen Lin's tools. Eventually, the two arrive in a reality where the Vox Populi already have the guns Daisy requested and are laying siege to Finkton.

Booker and Elizabeth soon discover that in this universe, Booker was a martyr of the Vox cause. Daisy is perturbed to see him alive, labeling him either "an impostor or a ghost", and sends her forces after the pair.

Booker and Elizabeth find Daisy and watch as she murders Jeremiah Fink. After shooting Fink, Fitzroy smears some of his blood across her face and orders her men to kill Booker and Elizabeth. Once the Vox Populi are dealt with, Daisy holds a gun to the head of Fink's son. After lifting Elizabeth into a nearby vent, Booker distracts Daisy as Elizabeth comes from behind her, plunging a pair of scissors into her spine. Daisy falls to the ground and bleeds to death.

Upon Elizabeth's return to Columbia, she witnesses a meeting between Fitzroy and the Lutece twins just minutes before the revolutionary's death. At this point, Fitzroy has captured Fink and his son. The Luteces explain to Fitzroy that it's crucial for Elizabeth to become a woman and gain the strength to kill Comstock. In order for this to happen, Fitzroy needs to force Elizabeth into the proper mindset. At first Fitzroy refuses to harm Fink's son, saying that, although she wants to see Fink and Comstock fall, the sins of the father should not be taken out on the boy. The Luteces hint that she doesn't have to kill him, but to just threaten him enough so that Elizabeth will have no choice but to "mature" into a killer. Fitzroy is saddened that she will not be able to survive the revolution, but she accepts that she must die if it means that it will lead to Comstock's death as well. This turns Elizabeth's opinion of her from a psychopath who is just as bad as Comstock to a martyr willing to give the ultimate sacrifice to her cause.

The last Elizabeth hears of Daisy is when she contacts and threatens Booker and her Infinite self in an elevator on their way to The First Lady as Elizabeth descends in the lift behind them. When Elizabeth returns to the Factory Docks with the Hair Sample that Yi Suchong requires, she finds Fitzroy's corpse along with her killed troops and The First Lady departing Finkton, showing that she was only a few minutes too late to cross paths with her past self and Booker. 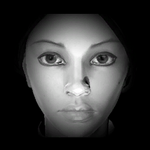 Daisy is an intelligent and determined woman whose goal is justice and retribution for the downtrodden citizens of Columbia. Daisy is shown to be highly resourceful, outwitting Columbian authorities and procuring resources for her movement from organizations owned by the Founders themselves.

Although Daisy has organized the Vox Populi into a bloodthirsty army which ultimately embarks on a reckless and wildly destructive campaign, she has a very prideful sense of her own righteousness. Burial at Sea - Episode 2 reveals that Daisy views herself as too noble to murder children by her own hand. Because of this, she only pretends to threaten Jeremiah Fink's son in order to goad Elizabeth into killing her, due to her predetermined role in Comstock's fall. She is shown to deeply care about her cause for freedom and is willing to sacrifice herself for her ideals. A vandalized Kinetoscope in Fink's office also reveals that Daisy is an agnostic in terms of theological beliefs.

Further concept closeup of Daisy at a desk in Comstock House.

Daisy Fitzroy's face projected onto a series of hanging red banners in the E3 2011 demo. 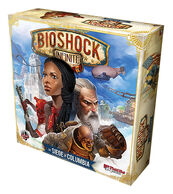 Daisy Fitzroy on the cover for BioShock Infinite: The Siege of Columbia.

The revised Daisy Fitzroy poster, which appears in BioShock Infinite: Mind in Revolt. 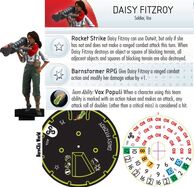 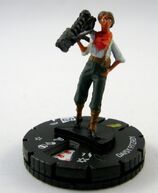 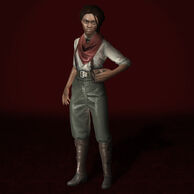 A model of Daisy Fitzroy by Brendan George. 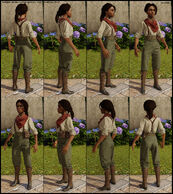 Multiple views of the Daisy Fitzroy model with its skin.

Daisy's character model in Burial at Sea.
Add an image to this gallery

A caricature of Daisy Fitzroy in the "Hunt Down the Vox" game at the Fairgrounds.

Statue of Daisy in the "Murder of Our Lady" Exhibit.

The first encounter with Daisy.

The First Lady with Fitzroy's face.

The last minute of Daisy Fitzroy.

Fitzroy in counsel with the Luteces.
Add an image to this gallery

Retrieved from "https://bioshock.fandom.com/wiki/Daisy_Fitzroy?oldid=320122"
Community content is available under CC-BY-SA unless otherwise noted.