“But I was the black ol' sheep back there, never believin' a word o'the Jesus bollocks meself. Then Andrew Ryan says he wants Wales an' Wales for Rapture — a Cathedral with no God, befittin' the ascent o'man. Now I'm runnin' girls… and Simon thinks he's saving souls.”
― Daniel Wales[src]

Daniel Wales is the brother of Simon Wales, and one of the primary architects of Rapture.

In their homeland of Ireland, Daniel and his brother Simon were architects, and their firm, Wales & Wales Architects, designed many prominent cathedrals. However, Daniel was always somewhat of a "black-sheep" because he never believed in any of the "Jesus bollocks" that the cathedrals represented. When Andrew Ryan commissioned Wales & Wales to design Rapture Daniel welcomed the opportunity to build "a cathedral with no God, befittin' the ascent o'man."[2]

After Rapture was completed, Daniel Wales took up residence in the area of Rapture that would later be called "Siren Alley." Unfortunately, his architecture firm soon fell on hard times when Rapture began to leak and he and his brother could no longer get any contracts. Soon after, he became estranged from his brother when Simon adopted the philosophies of Sofia Lamb and took on the title "Father Wales." Daniel held a deep grudge against Lamb as a result of this[3] and refused to speak to his brother again, despite Simon's attempts to convert him to the Rapture Family.

After Wales & Wales went out of business, Daniel resorted to running the Pink Pearl brothel. He began to drink heavily[4] and even indulged in splicing, although he forbade such behavior among the prostitutes.[1]

Daniel Wales is encountered by Subject Delta in the Pink Pearl during his journey through Siren Alley. Delta is required to obtain the code to Pumping Station #5 from him in order to progress in the level, thus making Daniel the first boss to be confronted by the player. When Subject Delta approaches him Daniel immediately assumes he intends to kill him and sets traps for him in his office before attacking.

Daniel Wales is equipped with a shotgun and Molotov cocktails, moves incredibly fast, and controls a hacked Security Bot. He has a very high amount of health, having about twice as much health as a Brute Splicer. Additionally, he is accompanied by a handful of Spider Splicers and Leadhead Splicers.

If the player can manage to hack the two stationary Turrets in the dark room below Daniel's office in the Pink Pearl, one can retreat to this room just before directly confronting Daniel Wales. This way the player can save a lot of supplies, and avoid the hostile Splicers out in the main area by letting the Turret guns do most of the work. The Hypnotize Plasmid is also effective in this fight because it can be used on the attacking Spider Splicers to turn them against Daniel, and you can actually hypnotize him as well.

The following are phrases that Daniel Wales says in BioShock 2. The name of the source audio file is listed when known. 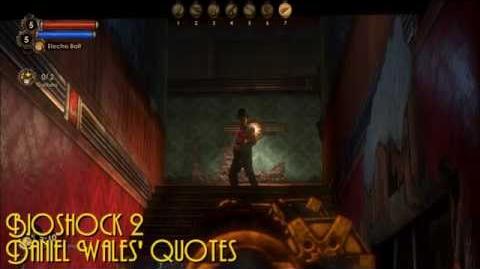 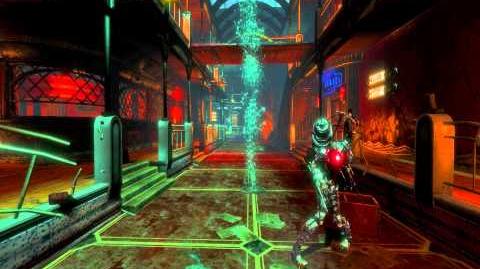 Wales theme, "The Pimp," from the "Sounds from the Lighthouse" CD.

This way to the main event.