“Investigations into Matters Both Public & Private”
― Sign on the door[src]

As evidenced by a photo found in the Lutece Labs, the agency is located at 108 Bowery St, New York City, New York. It specialized in cases for clients who chose not to go to the local constabulary. DeWitt could act as an investigator, courier, recovery agent, or hired muscle. His jobs could involve extra-legal or even illegal acts. DeWitt, having struggled with money, gambling, and drinking, lived within his office.

Though not formally visited while in Columbia, Booker will return to a hazy sepia-toned version of his office door anytime he is killed in combat without Elizabeth to revive him. Falling off the floating city of Columbia will simply return Booker to the nearest platform.

Certain events trigger a return to the office which can be explored in its entirety.

After the baptism by Preacher Witting, Booker will awake at his desk to the sound of the door being pounded on. A male voice insistently shouts "Bring us the girl, and wipe away the debt!" Opening the door will reveal a burning vision of New York City attacked by airships.

Booker awakes coughing in the Garden of New Eden.

After falling into the water following an attack from Songbird destroying the Sky-Lines from Monument Island, Booker awakes on the floor of his office. The voice still is shouting at Booker to wake up. As he looks up, Elizabeth is leaning against the table echoing the words "Bring us the girl, and wipe away the debt." She hums "Will the Circle Be Unbroken".

The voice angrily shouts that they had a deal while Booker asks what he wants. Opening the door, Booker is awoken on the beach of Battleship Bay by Elizabeth while he shouts for Anna.

After gaining admittance to Comstock House Gate, Booker and Elizabeth walk across the entrance to activate the lever to lower the bridge segments. Suddenly, Songbird swoops up and attacks Booker, throwing him through the windowpane of an adjacent building.

He awakens back in his office and looks up to see the Luteces at the door, exclaiming "Bring us the girl, and wipe away the debt!" Elizabeth leans against the side table and mumbles back the words. Booker heads to the other door just in time to see Songbird breaking open the rotunda of the building for the finishing blow.

After Elizabeth opens the Tear to Rapture after the destruction of the Siphon, they board a bathysphere to the Lighthouse on the surface where the gateway leads to a Sea of Doors. After passing through to the Maine Lighthouse, Booker re-experiences his baptism after the Battle of Wounded Knee. He initially takes Preacher Witting's offer of baptism, but changes his mind and breaks free, heading up to the island cabin doorway.

It opens to his office again where Robert Lutece stands waiting at the doorway. Booker explains that this was the man to whom he promises to bring Elizabeth to wipe away his debt. Elizabeth is not surprised and gestures towards the other door.

The door leads to a nursery, were a crib with a baby to which Booker acts with considerable confusion. Elizabeth indicates that it was this girl that Booker gave away to pay off his debts. Robert Lutece appears at the doorway saying "Time is running short." Reluctantly, Booker gives the baby to Lutece who remarks that Comstock has washed Booker of his sins. He turns and the door closes behind him.

Opening the door will place Booker back in the rowboat to the Maine Lighthouse with Elizabeth. They argue about who was the girl Booker was supposed to bring. He insists that there was no baby, triggering a nosebleed. They reach the pier where Elizabeth argues that Comstock is not dead until "he never even lived in the first place".

The door to the Maine Lighthouse opens to an alleyway where a young Comstock holds the baby with Robert Lutece. Rosalind is shouting at Robert through a Tear in the wall to come through before it closes. Booker tries to grab the baby from Comstock who fights back in a tug-of-war. Comstock overpowers Booker, pulling the baby through the Tear as it closes, severing the pinky finger.

Dumb with shock at losing Anna, Booker collapses against the wall which dissolves back to his office. He attempts to open Anna's room, but Elizabeth explains that she is gone. Turning around, the room has become derelict as Elizabeth informs that he locked himself away with his regret for 20 years until "a man came to you… offered you a chance of redemption". A Tear opens up to reveal the Luteces in raincoats ready to ferry Booker to the Maine Lighthouse.

Booker and Comstock struggling over the child.

A Tear in the derelict version of Booker's office.
Add an image to this gallery

After the credits finish rolling, Booker wakes up at his desk again. He searches for Anna and opens the door to the nursery. Just before reaching the crib, it fades to black.

Booker's office door can be purchased for $500 for one revival if killed during the trial. This gives the player a second chance at the Blue Ribbon Challenges (But only if the player didn't fail before). The doors can also be found on the individual maps:

In Rapture, Booker DeWitt awakens coughing in his office on Market Street. Though he was not the only detective advertising in the city, a strange woman walks in requesting his services.

It is the eve of 1958. Booker offers to light the mysterious woman's cigarette who reveals her name to be Elizabeth. She asks him to investigate the disappearance of a young girl named Sally. Elizabeth's intentions are vague and she is unwilling to reveal any vital information, saying only that Sally is alive and elite artist Sander Cohen may have the information regarding her whereabouts.

As in the main game, the office can be explored. The room is dark and crudely lit with intermittent flashes of a gaudily orange Ryan Industries sign shining through the half-closed Venetian blinds. The room where Anna's crib would have been in Booker's New York office is inaccessible. There is a glass case containing rank patches and regalia from Booker's time in the 7th Cavalry. The signage on the main entrance to the office has been updated to reflect the style of the late 1950s. Some money can be collected on the table behind Booker's desk before following Elizabeth out of the office.

DeWitt Investigations makes a brief appearance in the second episode. Chasing Sally through the now nightmarish illusion of Paris leads Elizabeth to the familiar door. After opening it, Elizabeth is faced with the overheated thermostat she used to lure out Sally from the vent as a bait for Comstock. Turning around, she sees the blonde white-eyed girl staring at her from the business' front stairs. Elizabeth consciousness continues to haunt her as she is surrounded by numerous Sallys trapped and screaming in vents as she wakes up and the nightmare ends.

The sleeping area of the office. 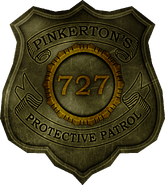 The dark interior of the office.

The sleeping area of the office.

The entrance on Market Street.

A mysterious woman entering the office. 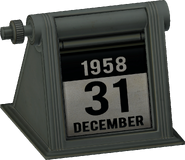 The neon sign by Booker's office.
Add an image to this gallery

Retrieved from "https://bioshock.fandom.com/wiki/DeWitt_Investigations?oldid=318600"
Community content is available under CC-BY-SA unless otherwise noted.