Deco Devolution: The Art of BioShock 2

Deco Devolution: The Art of BioShock 2 is a book of concept art, development renders, and developer commentary that was shipped with the non-standard editions of BioShock 2.

The Special Edition Art book is the main version of BioShock 2's art book. It is 168 pages and is composed of 10 chapters.

Includes concept art, renders, and commentaries from the game's developers about BioShock 2's new Big Daddies, including concept art for the Rumbler, the Alpha Series, Subject Delta, and the Lancer.

Includes concept art, renders, and commentaries from the game's developers about BioShock 2's Big Sisters, including early concepts of Eleanor Lamb in her Big Sister suit, and about the common Big Sisters.

Little Brothers are mentioned in the Inner Persephone section of the Deco Devolution Artbook. The concept art for them is vague, showing one sitting in a Therapy bed with the plastic covering surrounding it. There seems to be a business name printed on the plastic, and bloodstains within said plastic. He is simply sitting by a light inside, blankly. An image of one of the shown concepts can be seen in the gallery below.

Includes concept art, renders, and commentaries from the game's developers about each weapon from BioShock 2's solo campaign and from BioShock 2 Multiplayer with all their upgrades (and even the third weapon upgrades from the Sinclair Solutions Tester Pack DLC).

Includes concept art, renders, and commentaries from the game's developers about BioShock 2's new user interface for the solo campaign (including the free game interface and the vending machines' interface) and for the players' lobby from BioShock 2 Multiplayer. Also outlines early concepts of systems that never made an appearance in BioShock 2.

Includes 19 advertisements produced for the BioShock series. Contains advertisements for businesses not seen in the games, such as Fontaine Fire Fighters.

Includes 5 storyboards from BioShock 2. Two of them depict deleted scenes from the game, and the three others depict slightly modified ones.

Binding of the Special Edition book. 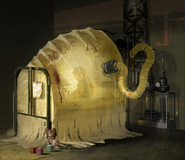 The Rivet Gun's page in the book.

Concept sketches for different masks to conform to the same Splicer face, with the Crawler sketch used as an example.

Concept sketches for the Splicer masks.

Concept sketches for the masks used for BioShock 2 Multiplayer.

Concept art for the Kashmir Restaurant from the cut prelude.