For the Plasmid in BioShock, see Target Dummy.
“Enemies on your back? Distract their attention with a helpful decoy. They take the heat… so you don't have to!”
― Decoy Plasmid advertisement

Decoy is a Plasmid available in BioShock 2. When selected, it creates a translucent figure in the player's center field of view, marking the location where the decoy target will be created. Decoy is an active Plasmid that instantly creates a single decoy target in a single location, at the cost of EVE.

The decoy target is an illusion; a translucent image of the player that Splicers, hostile Big Daddies, hostile Security Bots, Security Cameras, and Turrets will regard as an enemy. A maximum of one decoy target may be created at a time. Casting Decoy any subsequent number of times will remove and replace the active decoy target with a new one. The decoy has a duration of approximately ten[citation needed] seconds before disappearing. The created decoy does not have health or any impact points. All forms of attack against the decoy target simply pass through it.

First available at a Gatherer's Garden in Minerva's Den for 60 ADAM.

Can be purchased for 120 ADAM in Gatherer's Gardens onward the first machine in Operations. 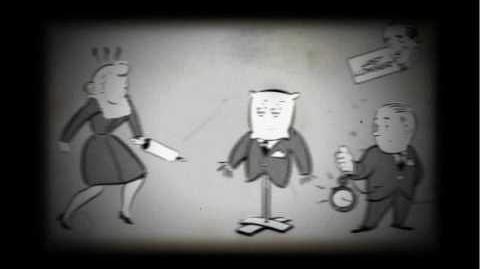 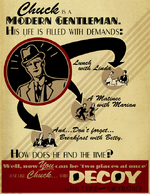 Advertisement for Decoy from There's Something in the Sea.