Devil's Kiss is a Vigor in Columbia, created and sold by Fink Manufacturing. It allows the user to manipulate and generate fire. Casting the Vigor throws a projectile which can rebound on scenery and, upon impact with an enemy or after a set time, will explode and deal heavy damage to nearby enemies. Victims will also be set on fire and take damage over time. Charging the Vigor (at double the Vigor's Salts cost) will lay down a stationary trap which, upon detonation, deals damage to enemies across a wider radius. Enemies killed while on fire will burn to ash, leaving a lootable lockbox behind. Devil's Kiss is effective on most enemies, with Firemen being a notable exception.

Devil's Kiss is the second Vigor Booker DeWitt comes across: upon killing the Fireman in Shady Lane after the Columbia 1912 Raffle and Fair, the foe will drop a bottle of the Vigor.

Real world replica of the bottle.

Devil's Kiss being demonstrated at the Fairgrounds.

A Soldier killed by Devil's Kiss.

A Murder of Crows infused with Devil's Kiss.

The Devil's Kiss & Possession combo.
Add an image to this gallery 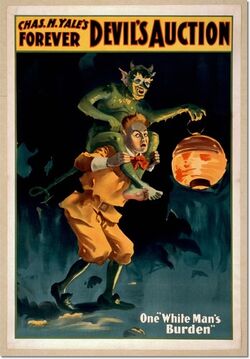 Devil's Kiss makes a return in the first episode of Burial at Sea, as a drinkable Plasmid from Ryan Industries, while retaining its use from the main game. Unlike the Columbia version, enemies killed while on fire won't burn to ash.

Retrieved from "https://bioshock.fandom.com/wiki/Devil%27s_Kiss?oldid=315929"
Community content is available under CC-BY-SA unless otherwise noted.