Dimwit & Duke Ice Cream Shoppe is one of the many shops on Main Street in Soldier's Field, Columbia.

Booker DeWitt and Elizabeth arrive on Main Street and have some time to look around the different spots on the boardwalk, including the Dimwit & Duke Ice Cream Shoppe. The shopkeeper proudly advertises his products when the player enters. It is near closing time so the parlor is not that full, but the patrons on the spot sits idly enjoying their frozen treats and a cleaner has already started with the floor. Booker has an option to steal from the Cash Register, but doing so will not only make the shopkeeper hostile, but several police officers will also join in the fight. 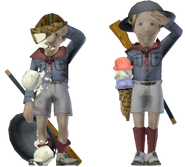 The Parlor is average size for an ice cream shop and with 6 small tables, 2 large and 25 chairs (including bar stools). At the back wall of the shop is the menu in between two shelves with boxes of candy and cigarettes. The wall features statues of Dimwit and Duke on either side of the menu (Dimwit has spilled his Lazy Lemon all over himself while Duke is holding his Patriotic Duty and standing in a saluting pose). The shop sells a large variety of ice cream, scooped out from the six containers of the frozen dessert, on the counter next to the cash register. A mobile of toy airplanes hangs from the ceiling, and lamps in the shape of ice cream cones hang on the walls at the far ends of the counters. Every table has a singe candle for a calm ambiance, and Zachary Hale Comstock's Voxophone I am His Mirror has been left on one of the larger tables. As many of the customers are children, posters promoting Comstock Academy, the Comstock Cadets: the Junior Flying Squad hangs on the walls.

After Hall of Heroes[]

When returning from the Hall of Heroes, all the shops have closed on Main Street. The shop's curtains are covering the windows and the entrance is gated shut, but can still be opened. The smaller tables and their chairs are stocked in corners, while the two large tables remain. The electricity is off, and the only light-source comes from a lantern and a candle on the counter. All the ice cream containers are empty and the day's profit are left in purses next to the cash register. If the player visits the parlor before Founders Books or Toy Soldiers, a bottle of Shock Jockey will be found on the bar counter.

The roof can only be accessed after visiting the Hall of Heroes via the Sky-Line. The small platform contains a bottle of Salts, an RPG, and a Gun Automaton or Cover, either of which Elizabeth can bring in via Tears.

A Dimwit & Duke Ice Cream Shoppe can be found on the Duke and Dimwit Theatre map. This branch of the business is in the form of two pairs of kiosks (closed at the time) with no seating area, underneath the cantilevered part of a building. The door to DeWitt Investigations, which can be momentarily bought as a plan B if the player dies, is set next to them.

An early version of the parlor, with a different floor and posters on the wall.

The vendor at the counter.

Another view of the closed interior.