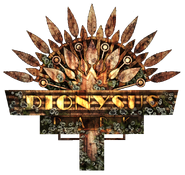 “Dionysus Park was my home, Delta… an experiment in social unity, cut short by human folly. You dishonor its memory with every step.”
― Sofia Lamb[src]

Dionysus Park is the sixth level in BioShock 2. It was Sofia Lamb's private retreat, hosting an exploration of art and culture. The player is required to pass through this area to reach Fontaine Futuristics and Eleanor Lamb. Stanley Poole, however, requires that the player rid the park of all Little Sisters before he will allow Subject Delta access to the Atlantic Express in order to progress onwards. 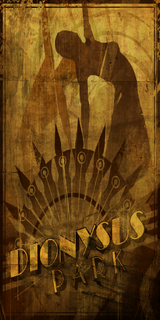 Before the fall of Rapture, Dionysus Park was the private property of Sofia Lamb, and she meant for it to stand as a living example of her Collectivist ideals. Lamb felt that, despite Andrew Ryan's goal that artists in Rapture should "no longer fear the censor," he still censored the city's artists when he believed their public art ran contrary to his own ideals. Lamb created Dionysus Park as a safe haven where all artists could present their work unrestrained, and thus defy Ryan. The park was open to the public free of charge to spread Lamb's philosophy and to subtly slander Ryan in front of all visitors. In that way, Dionysus Park was a contrast to Ryan's Arcadia which started charging its visitors, both locations being a boardwalk for the citizens of Rapture with elements reminiscent of the surface world.

Dionysus Park soon became a retreat of many respected artists in Rapture, including one of Ryan's staunchest supporters, Sander Cohen. Lamb encouraged the exploration of "unconscious art," an idea that Ryan found loathsome. None of this escaped Ryan's attention for long, and he began to seek a reason to take Lamb out of the picture. He had Augustus Sinclair hire a man who could infiltrate Lamb's group and gather evidence he could use against Lamb so she could be arrested and imprisoned for sedition. That man was Stanley Poole, a news reporter for the Rapture Tribune with a knack for gathering information. Lamb, fooled by Stanley's claims of stifling censorship at the Tribune, applied her own philanthropy and allowed him to join "The Family". Soon Poole was let into her innermost circle.

While in the park, Stanley struggled to learn of Lamb's plans and to avoid detection while carrying out his duties as a mole. However, he became increasingly anxious as Ryan's men pressured him, and he suspected that Lamb's daughter Eleanor saw him as a "phony." Eventually Stanley found enough evidence of Sofia's Collectivist activities so that Ryan could proceed with his plans to remove Sofia Lamb, resulting in her arrest and imprisonment in Persephone.

Afterwards, Stanley Poole was left in charge of Dionysus Park. He then embezzled park funds and Lamb's followers' donations to throw lavish parties for his own pleasure. Eleanor Lamb observed that Poole was misusing his position of power. She confronted him and threatened to tell her mother's supporters about his actions. Poole panicked, kidnapped Eleanor, and sold her to the Little Sister's Orphanage in Siren Alley. With Eleanor gone, Stanley continued to abuse his position as leader in the park and exploit his influence with Lamb's backers.

However, after the events of the 1958 New Year's Eve Riots Stanley began to hear rumors that Sofia Lamb had been sighted within the city again. He realized that she must have broken out of Persephone somehow. He feared what she and her followers would do, if she learned of what he had been up to in her absence. Stanley Poole needed a way to silence Lamb's followers in the park, so that none of them could stand witness to his betrayal. He learned of a potentially catastrophic design flaw in the pump lines running through Dionysus Park, and proceeded to damage the faulty system, flooding the entire park and killing anyone who could testify about his treachery.

The deluge was reported as a "cult-related" incident of intentional mass-suicide by the press. Sometime later, Lamb discovered that it was Poole who had taken her daughter and flooded the park, but she forgave him seeing Eleanor's Little Sister condition as a boon to her research. Poole spent a decade believing that he was the only one who knew what really happened. The secrets of Dionysus Park stayed underwater until Subject Delta drained it during the events of BioShock 2. Over the years, the area suffered heavy water damage, and coral and other ocean life grew to cover the floors and walls of the park.

After Subject Delta and Augustus Sinclair leave Pauper's Drop onboard the Atlantic Express, they intend to head straight on to Dionysus Park, but Simon Wales impedes them by blowing open Delta's train car with a torpedo. After Wales is defeated in Siren Alley, Delta uses Wales' Genetic Key to drain the water from Dionysus Park, rescuing Sinclair from the leaking train car. Sofia Lamb then reroutes the water drained from Dionysus and inundates Siren Alley as a testament to her resolve.[1] Once he escapes the red-light district, Delta enters Dionysus Park through a maintenance airlock in the basement storage area. Delta then makes his way upstairs to the train station where Sinclair has been trapped.

Soon after Delta infiltrates the park, he is contacted over the radio by an enigmatic man named Stanley Poole. After the seawater is drained, numerous residents of Rapture entered Dionysus Park, Poole among them. Poole has holed up in the control booth of the train station and refuses to let the train pass unless Delta performs a task for him. The newsman fears the Little Sisters coming into the park to gather ADAM might retrieve the genetic memories from the corpses and relay the truth about his betrayals. If Dr. Lamb learns of those memories, Poole's duplicity will be laid bare. Poole demands that Delta deals with all of the Little Sisters before he can continue his journey. Lamb does not take kindly to Delta intruding on what was once her "experiment in social unity" and makes her displeasure clear by sending her Splicers into the park and bombarding the Big Daddy's radio with taunts and threats. After Delta takes ADAM from each Little Sister, Eleanor, having a special link with the girls, telepathically shows him memories which Stanley wanted to hide. Delta thus learns how the park's flooding, Eleanor's fate, and his own condition were all caused by Poole. Sofia tells Delta that she was already aware about all of this information. When Delta returns to the train station, Stanley is ready to fulfill his part of the bargain to open the way for the train to pass. However, Sofia opens the door to the control booth, and Delta is given the choice to either forgive Stanley and let him live, or kill him out of vengeance.

This was the main hub for Dionysus Park, connecting all the locations of the park to the Train Station. This area included two large pools of water accompanied by two statues, several benches, a Circus of Values Machine, and a Health Station. A bulkhead just before the Gallery Entrance has become blocked by the time Delta arrives at the park.

Next to the Gallery Entrance is the Triton Cinema, a large theater in the south section of Dionysus Park. Triton Cinema held a ticket booth, a lounge, a concession stand, restrooms, a projection booth, and a lower seating area overhung by a spacious balcony facing the screen. The theater once seated 240 people in the top and bottom levels.

The cinema was one of the tallest structures in Dionysus Park. When it was flooded, the Cinema was one of the only places that was partially untouched by water. Half of the upper balcony, the hallway, and the Projection Booth are all above the water line that spoiled the rest of the level.

The Promenade is located behind the Gallery Entrance. This region was a pleasant area for relaxation, socializing, and dining. The first two rooms contain cloth covered tables littered with wine bottles for wine tasting. Through the hallway is the Piano Bar which holds, not unexpectedly, a piano and has entrances to two of the many galleries of the park.

This art gallery was once used to display paintings and other cultural work created by the citizens of Rapture. The title seemed to fit Lamb's symbols of butterflies and rebirth, taking its name from the word for the final stage in metamorphosis. At some point in its history, the temperature control for the gallery was broken, and the room became completely frozen over, sealing the entrance behind a thick wall of ice.

Upon using Incinerate! on the frozen blockage, the player will find that the interior of the gallery is guarded by a large amount of security, including Security Cameras and Turrets. As dealing with the Little Sisters is required in this level, and there is an ADAM corpse near the back of the gallery, this area proves quite useful for the player if they were to hack all the security in order to help defend a Little Sister set down to gather.

A gallery located beside the Imago Fine Arts, the J. Fischer Gallery was a split-level facility that displayed works of various artists. The first level contains several tables, paintings, and a statue of a bear. The second floor contains chafing dishes on a table for a banquet and a storage area.

The Chase was another atrium connecting regions in the park. The center of the room was dominated by a large carousel, one of the activities for children visiting the park.

Lamb's Garden is connected to the Carousel atrium. The entryway contains several food and wine tasting tables and doors to the actual garden beyond. Lamb's Garden was meant to be similar to Arcadia with trees and ponds, but the cold saltwater from the flooding killed the plant life. This resulted in two entryways to a further portion of the garden becoming inaccessible.

Cohen's Fine Art Collection is a branch of his Collection in Fort Frolic. It contained valuable art pieces and statues arranged in several lounges.

This storage area held various art pieces and objects of the park that were not currently on display. 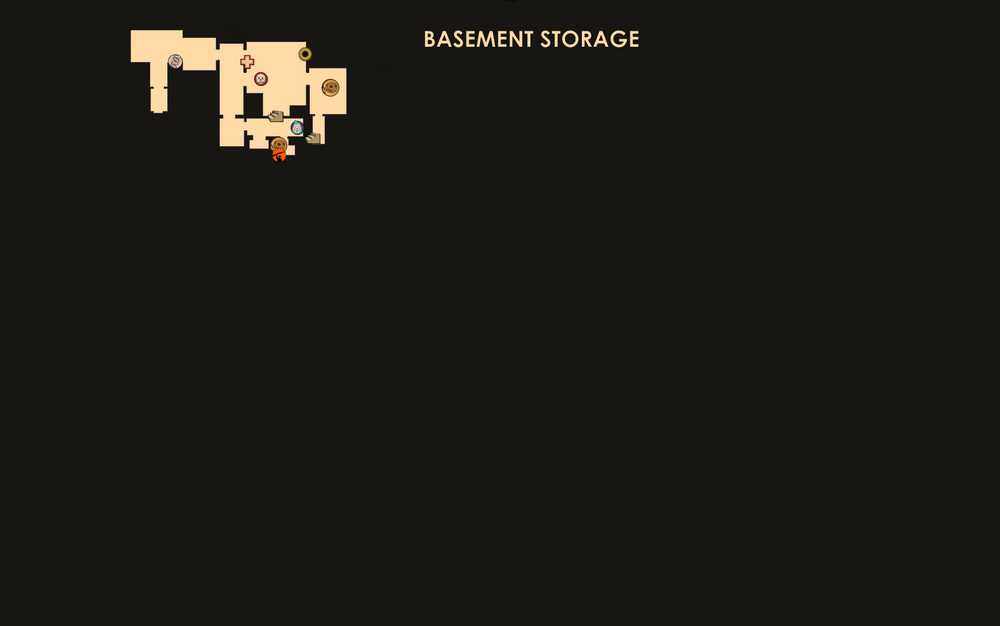 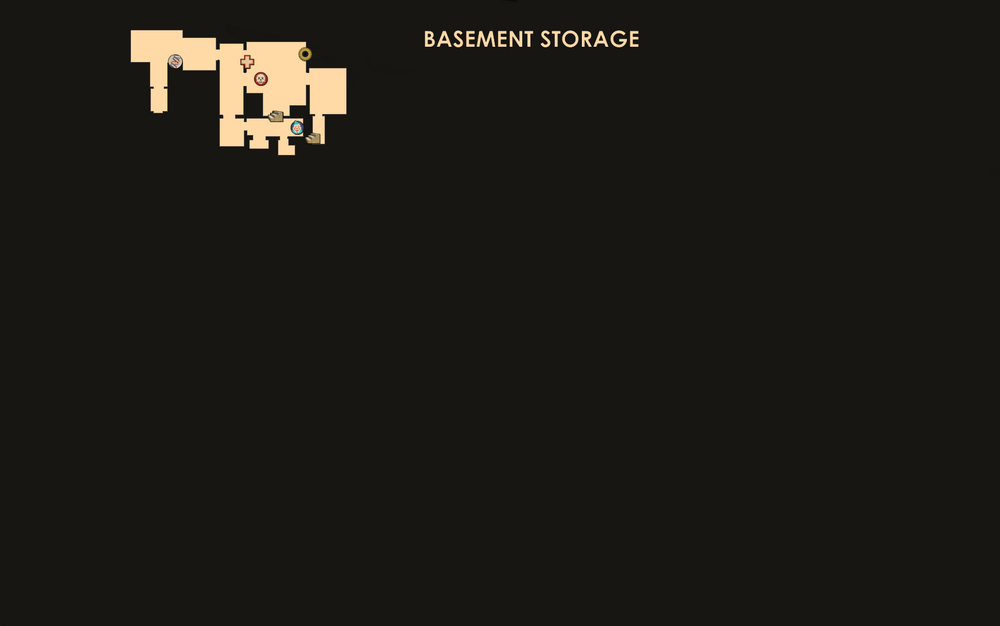 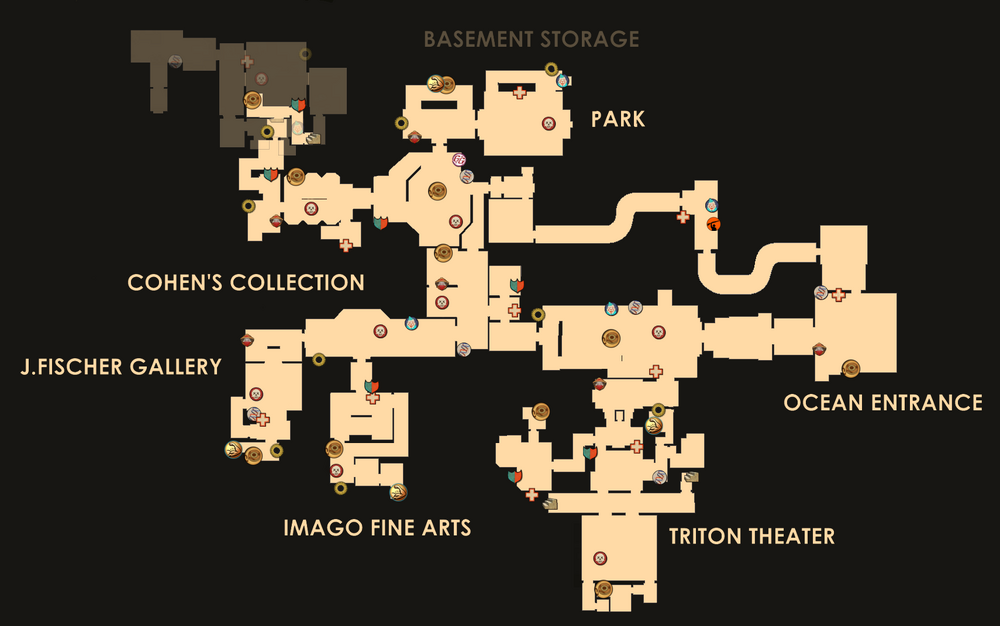 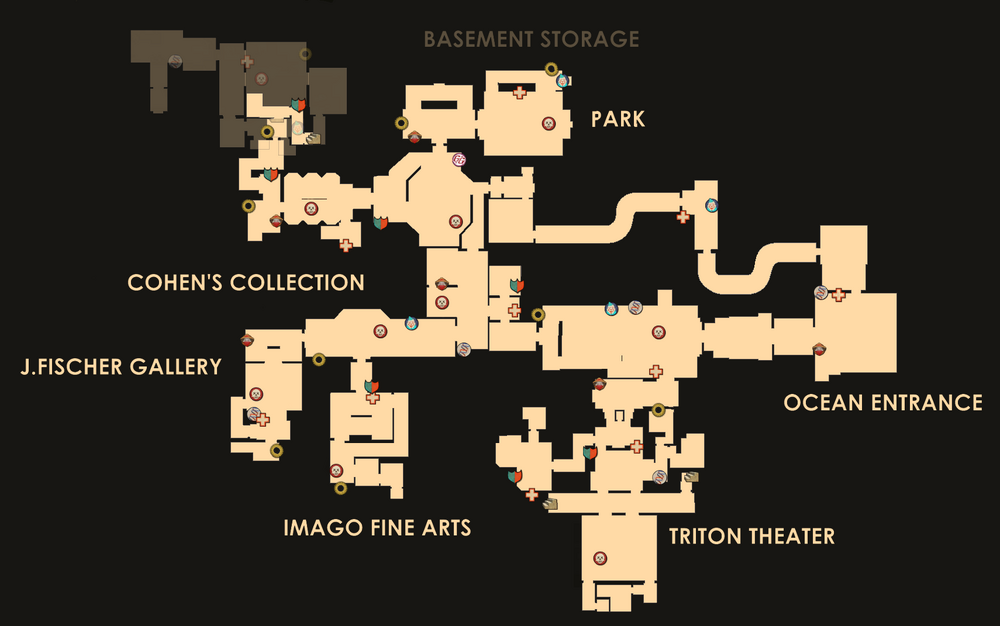 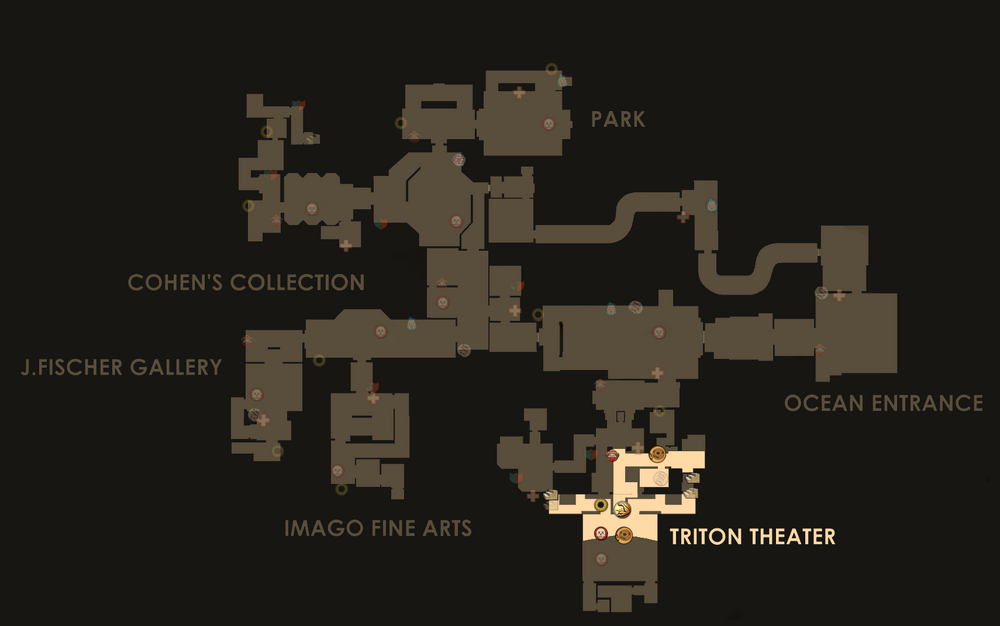 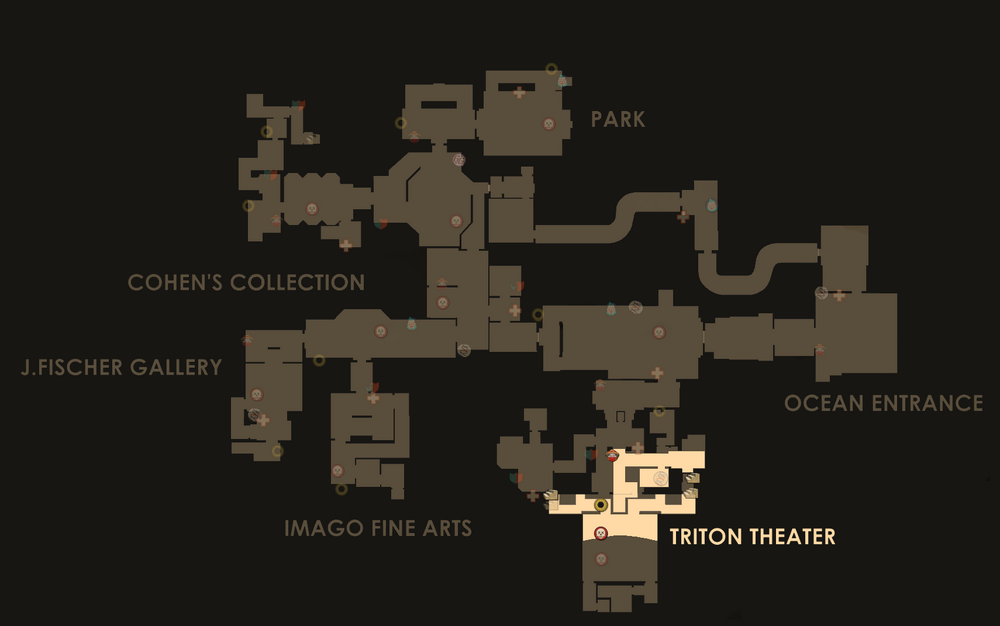 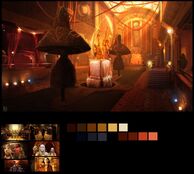 Concept art for the architectural panel sculpture, found in the Gallery Entrance.

Concept art of the waterfall on the sun architectural panel sculpture.

Concept art for a bear sculpture, commonly seen in this level.

Concept art for a wolf sculpture, commonly seen in this level.

Concept art for a panther sculpture, commonly seen in this level.

An idea for a "Dionysus Park Grand Opening" poster, unused.