Dionysus Park is a retooled environment for BioShock 2 Multiplayer of Dionysus Park from BioShock 2. It was one of the most lavish and extravagant areas of Rapture, and is represented as such in this map. It is part of the Rapture Metro Pack.

Created by Sofia Lamb, Dionysus Park was made to be a living example of her ideals, a safe haven for artists to speak out within Rapture. The Park was open to the public free of charge to spread Lamb's philosophy and to subtly slander Andrew Ryan. When Lamb was imprisoned by Ryan before the Civil War, the park came under the management of Stanley Poole, who embezzled the park's funds and threw lavish parties for his own pleasure. Dionysus park was later flooded, but apparently not before some Civil War action took place within.

This extravagant area was adorned with large statues and is under a grand glass dome. This is the longest and largest area on the map, and spans between Cohen's Collection to Imago Fine Arts galleries. In the area's center, near an indoor pond, is a large bridge. This area is handy as a holdout, as players will re-spawn in either of the opposite art galleries. On can jump onto the statues in the Promenade. There is a Little Sister Vent on the opposite wall to the vending machine.

This area was one of Sander Cohen's premier art galleries in Rapture. The Main gallery is a two story complex with fourteen original artworks by Sander Cohen.

The second floor is accessed by stairs from the first floor leading to a balcony pathway with two paintings and tables for the guests. The pathway leads to a small area with a view over the promenade, where guests could rest and socialize. Restrooms are to be found here; the women's restroom is barricaded and inaccessible, but the men's restroom is still open. It has suffered some damage; with a large hole in the wall and an oil spill.

The lounge had a buffet serving at the time of the grand opening, with two rooms, the guests could dine in a relaxing atmosphere. The first room is accessed from the Cohen's Collection's main gallery and from the second room. It has suffered major damage with a large hole in the wall, with two oil spills and a gas leak, some tables have been moved and tilted and are covered in blood or oil. The second room has a grand piano (provided by Champion Pianos, judging by the advertisement over it) and some tables. It is accessed from stairs to the bridge and a long hallway to the Gallery's main entrance.

The Imago Fine Arts Gallery mainly displayed sculptures, unlike Cohen's Collection, opposite of the Imago Gallery, which focused on oil paintings. The exhibit was under construction when the civil war broke out, leaving many artifacts under cloth or in crates.

The bloody corpse of a man rests by crates under an Air Vent, as a most unwelcoming impression for anyone approaching the main entrance. A security turret in front of the employees only storage area makes sure any unwanted intruders turning to the right from the main entrance or coming from the promenade bridge won't get in without a struggle. In addition to the gallery entrance for the public, the player can also jump their way up to the gallery smoking lounge via crates and a cloth covered horse statue, as a more informal entryway.

Surviving the security turret, will grant you the privilege of entering the storage area, filled along the walls with statues and crates, never to be enjoyed by gallery attendees. The area gets its light from windows, that leak over a bloodstained poster of Sander Cohen's & Ava Tate's film; The Black Dream, slowly filling the small locker room with salt water. Before walking into the gallery, the player may fill up on EVE and ammo at the Circus of Values near the windows.

The Imago Gallery welcomes guests with a grand statue of a polar bear underneath a glass dome, serving as a definite centerpiece of the space. The beige and red wallpaper fits right in with the golden interior of the rest of the park, but another corpse, bullet holes in the wall, a broken flowerpot, the half-finished exhibit and ongoing war breaks the calm illusion. Continuing from the center to the raised floor, shows the player to the rest of the artifacts, upper floor and storage area. Two additional statues by the left wall are covered in cloth but a third sculpture of a golden brown wolf is not. Above a locked employees door and Circus of Values is an air vent, accessed from the Upper Floor. Near the cracked windows on the far wall is another vent, but this one is for the Little Sisters.

The upper floor, mainly used as a one person office and access way to the smoking lounge, only has a single piece of art, in the form of an oil painting for a change. Near the desk is an air vent leading back to the entrance and another vent by the smoking lounge doorway leads to the safe room and lower gallery. The smoking lounge served for the visitors as a socializing area, where they could discuss art or recent events without disturbing the silence in the gallery. The promenade and main entrance are in view from two separate balconies along seating and a broken elevator. Here is also the gallery's safe room, holding Safes and important files. The doors are sabotaged and unusable, but luckily the player may break the wall or enter the room by vent if they so please.

A portrait of Sander Cohen. 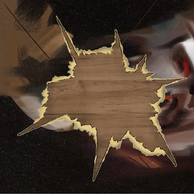 A calender found on this level.

The Little Sister Vent beneath the bridge.

The grandeur of Dionysus Park.