For the currency in Columbia, see Silver Eagle.

Dollars were the prevalent currency in Rapture before its descent into addiction and chaos. The Rapture Dollar has Andrew Ryan's face on it, similar to the U.S. dollar. Dollars are used to purchase a variety of items from vending machines, such as First Aid Kits, EVE Hypos, and ammunition. Money is also used to "buy out" machines in lieu of hacking (the amount scales up quickly in later levels).

The Rapture Dollar became practically worthless as a result of the Rapture Bank Crash, at the beginning of the civil war in early 1959. While people no longer valued them greatly, many abandoned vending machines and similar devices were still set up to accept dollars, so there was still some worth in collecting them.

Dollars are somewhat abundant and can be located in nearly every area of Rapture. Common places to scavenge cash include:

Although the dollar bar has four digits, the maximum amount of money Jack can carry is $500. When at or near this limit, it is wise to stock up on some supplies and ammo, leaving open the ability to collect more money you find.

Though Sofia Lamb has replaced Ryan as leader of Rapture, the city's currency remains and costs are generally higher. Subject Delta can carry up to $600 early in the game. However, he can obtain a wallet size upgrade by researching Thuggish Splicers to level 2. This will allow him to carry $800 rather than $600. Big Sisters also carry a good chunk of change when killed, so you can easily restock your supplies after defeating them.

Dollars make a comeback in the Burial at Sea downloadable content for BioShock Infinite. Instead of paper bills, Rapture Dollars appear as coins, retextured Silver Eagles minted with a stylized "R". Items that provide Dollars are: 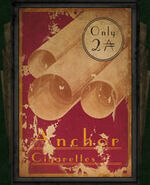