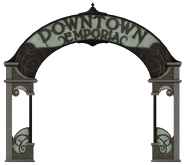 “Reclaimed! For the people of Columbia!!!”
― Vox Graffiti

Downtown Emporia is the primary commercial center of the district of Emporia in Columbia. Much of it is comprised of stately buildings and stores, but by the time that Booker and Elizabeth visit the district, it has fallen into ruin due to the actions of the Vox Populi. The main sectors include the Financial District, the Market District, and Harmony Lane as well as Victory Square, leading to Comstock House.

Downtown Emporia is also the name of the region between Harmony Lane and Victory Square. 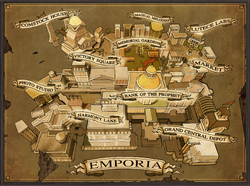 The metropolitan center consisted of Harmony Lane, where entertainment and theater venues were located, the Market District, which contained the upper class shops and boutiques that Columbia's wealthy could afford, the Cunningham Photo Studios, where the "well to do" of the city had their photos taken, Lutece Labs, the city's premier research center operated by the Lutece twins, and finally, Memorial Gardens, notably where the "sainted" Lady Comstock was entombed.

Other stores within the district include Patriot's Pride, the Art Gallery, Hudson's Fine Clothing, and Magical Melodies.

Barely escaping detection by the Songbird, Booker and Elizabeth descend from the Grand Central Depot in an elevator. They observe that the Vox Populi have taken over with fighting wreaking havoc in the city.

As they enter the Thoroughfare of the Financial District, a rogue missile from one of the zeppelins hits the elevator car. Clambering from the wreckage onto the Sky-Line, Booker and Elizabeth must deal with a Handyman and several Soldiers.

After the dust settles, Booker and Elizabeth try to reach Comstock House through the Market District or Harmony Lane.

If Booker and Elizabeth leave the Financial District through the Market District to go to Victory Square, a ravaged Hudson's Fine Clothing is soon encountered and quickly following is a battle with a Fireman. After the defeat of the Fireman there is the opportunity to loot a Wilson Bros. & Company Bottling Works. The next major encounter is near Parker & Co. Excelsior Brand Canned Meats where a Vox Populi firing squad execute a number of civilians and then attempts to kill Booker. Joining the fight are several more Vox and a reprogrammed Motorized Patriot.

If Booker and Elizabeth make their way to Comstock House through Harmony Lane they pass through Beggar's Alley and upon leaving are ambushed by Vox Snipers in the Plaza. After the defeat of the snipers some nearby the buildings can be searched for supplies including Emporia Towers and a Pub with a Wine Cellar. After Harmony Lane is Downtown Emporia. When entering this area Booker and Elizabeth will find a large battle between the Founders and the Vox. Despite a Motorized Patriot being among the Founder’s forces, they are overpowered by the attaching Vox who count along their number a Fireman. After the defeat of the Founders the Vox will quickly turn on Booker and Elizabeth. After the Vox are defeated the area can be explored in relative safely and has an Art Gallery that can be unlocked. This area also contains Cunningham Studios, but like Lutece Labs it cannot be entered yet. To leave Downtown Emporia the pair walk up a wide stairway to Victory Square.

They travel to the Memorial Gardens where Lady Comstock's corpse is locked in an airtight chamber. Comstock uses the Siphon to draw upon Elizabeth's powers to resurrect Lady Comstock back into Columbia as a Siren. After a battle against her reanimated minions they manage to dispel her for the time being.

Suddenly, Rosalind and Robert Lutece appear, digging their own graves. They hint that three truths about Lady Comstock must be found in order to understand her. As Booker looks for these "truths", he discovers that Elizabeth is not Lady Comstock's daughter. Lady Comstock was killed by Comstock, who then attempted to murder the Lutece twins. Armed with this new knowledge, Elizabeth confronts Lady Comstock again and explains that they had both been deceived by Comstock. Lady Comstock then willingly opens the gate for them to travel to Comstock House.

The primary district which held the financial businesses of Columbia. Its Thoroughfare connects Downtown Emporia with the Grand Central Depot, with several shops located around it. It is also the entrance to the Bank of the Prophet, Emporia's main financial establishment.

The shopping district of Emporia, filled with upscale shops that only the wealthy could afford. Among the stores are an Art Gallery, but also the Lutece Labs and further away Albert Fink's Magical Melodies shop.

A residential and shopping area, home of the Emporia Towers and an unnamed pub. Further away is located Cunningham Studios.

Z. H. Comstock Victory Square is a small open plaza at the gatehouse to Comstock House. A statue of Lady Comstock is placed near the entrance, as a memorial. The gatehouse is barred from entry by an automaton.

A quiet graveyard behind the Bank of the Prophet, containing tombs of notable Columbian citizens including the Lutece twins and Lady Comstock's.

The Bank of the Prophet.

The entrance to Victory Square.
Add an image to this gallery
Retrieved from "https://bioshock.fandom.com/wiki/Downtown_Emporia?oldid=319610"
Community content is available under CC-BY-SA unless otherwise noted.