Dr. Suchong's Free Clinic was a medical clinic and research laboratory, owned by Dr. Yi Suchong, which operated out of Apollo Square in Rapture. Jack must visit this location during the events of BioShock. The clinic also reappears and is extended as the final level in BioShock Infinite's DLC, Burial at Sea - Episode 2.

Located on the second floor of Artemis Suites, the clinic served as one of the chief medical facilities in the district. Similar to Frank Fontaine's charity works, Fontaine's Home for the Poor, the Little Sister's Orphanages, and Fontaine Clinics, Suchong's free clinic was created as part of a business venture rather than as a genuine act of charity.

Many of the working-class citizens of Apollo Square who could not afford the expenses of the Medical Pavilion came to the clinic, seeking first aid and health care. Suchong used it as a place to further his experiments by using his patients as test subjects. In Burial at Sea - Episode 2, it is revealed that a much larger research laboratory the size of one of Point Prometheus's facilities was hidden behind the clinic. In this lab, Suchong experimented on many projects, especially his last: Lot 255, the Protector Bond mechanism between Big Daddies and Little Sisters. Suchong believed that the bond was not fully functional and was killed by a Bouncer when he struck a Little Sister out of frustration.[1] The Protector impaled Suchong with his drill, pinning the scientist to his desk where he remained even after the clinic was placed under lock-down throughout the civil war.

Even with Security Cameras and Turrets put in place, the clinic still became a hotbed of violent activity. A number of citizens looking for medical supplies broke in, and the ensuing chaos has left the waiting room in shambles, and the surgery a bloody scene straight out of a nightmare.

In an attempt to cure himself of the effects of Code Yellow, Jack journeys to the Clinic of Dr. Yi Suchong to find a dose of Lot 192. When he first arrives at the Artemis Suites, a Nitro Splicer stands outside the clinic guarding the area from intruders. The clinic itself is well protected: a Security Camera positioned on the west wall sounds as soon as one steps through the door, a low slung electric trap wire prevents one from running forward for cover, and a Machine Gun Turret guarding the back forms the final defense. The central part of the clinic has a waiting area in the front with two couches, a pair of metal bunk beds and a Gene Bank in the back. The eastern room is a converted bathroom and kitchen that served as a surgery wing. It's also a bloody mess, with bodies everywhere. In one of the stalls is the Medical Expert 3 Gene Tonic, but a Leadhead Splicer is playing dead in front of it. The western room contains Suchong's office and a secured test area where he performed the Protection Bond experiment and other tests on Big Daddies. After Jack takes a dose of Lot 192, several Splicers will spawn outside for Jack to deal with.

A Multiplayer friendly version of the Clinic can be found in the Multiplayer map: Fontaine's Home for the Poor.

Elizabeth is sent to the clinic by Atlas to recover his "ace in the hole" from Suchong in exchange for Sally. She must enter the secret research facility through a hidden door at the back of a Rapture Tribune kiosk in a Rapture Metro station, which was where Suchong's real experiments were performed.

The corridors of Suchong's lab were wide, dark, and surrounded by wires, machinery, and gurneys. Many of the bulkheads remain sealed, but the glass window at their center just reveals more long dark corridors.

The first area Elizabeth ventures through was where Suchong conducted research on Big Daddies and Little Sisters. A number of empty Bouncer suits hang from chains on the ceiling, and notes on a blackboard show the problems Suchong was having. Research on the Vita-Chamber was also conducted here, with a prototype still present. While traveling through the area, she encounters a dying Bouncer blocking her way and she is unable to move him due to his size. The two Little Sisters he was meant to be bonded to, Masha Lutz and Leta, are terrified by him, but Elizabeth needs their ADAM to heal the Bouncer. Once the girls discover that the metal monster will die without them, they offer their help in saving him, which creates a bond between them.

This small room is where Jack was raised, and brainwashed, to becoming Fontaine's puppet. The desk where Suchong would sit allowed him to watch Jack as he slept, the machines used on him can still be seen hanging over head. The fresh sandwich on the deck suggests Suchong was in here earlier, and the note from Brigid Tenenbaum may suggest what he was considering while he sat there.

At the other end of the laboratory, Elizabeth discovers a hidden door disguised as a wall, which leads directly to the kitchen of Suchong's free clinic. She witnesses the two previous Little Sisters playing around the doctor, eventually angering him as he tries to work on the Protection bond. After the scientist smacks Leta out of irritation, her cries summon the Bouncer whom she and Masha have just bonded with. The Bouncer attacks Suchong, screwing him to the desk with his drill. This event is recorded in an Audio Diary that Jack can find when he eventually goes there in 1960.

The Clinic's entrance and waiting room.

Suchong's office and the holding room.

The Doctor is in.

The hole in the wall that Elizabeth used to escape the clinic, as seen in BioShock.

The laboratory wall next to Suchong's office in BioShock, which is revealed in Burial at Sea - Episode 2 to conceal a hidden door to Suchong's lab.

The "Send to Ryan" note for the "Mind Control Test" Audio Diary.

A board showing the problem with the Bouncer's grappling drill.

"Not found in genetics!" 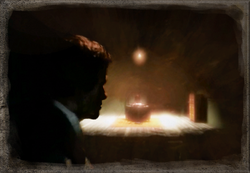