The Splicer model Ducky is an aging constable. He fancies himself a big-shot as well as an upholder of justice, but in actuality he is just a bitter, lonely old man. Based on his rantings, he appears to have a large degree of paranoia (which is not to suggest that the other Splicers are mentally sane) against foreigners, youth, authority figures, people of other religions, etc. His dialogue in BioShock suggests that he answers to a "Mr. Coswell." It is never specified exactly which of Rapture's security forces he represents, but based on his dialogue, it is likely that he was an agent of Ryan Security.

In BioShock 2, Ducky has become religious, replacing the Waders Splicer's role from the original game and even reusing some of the Waders' quotes, and though he may be religious to the god of Christianity, he is still just as cruel as before; worse even. He also worships Eleanor Lamb in favor of her mother Sofia, judging by his dialogue.

The following are phrases that the Ducky Splicers will say in BioShock. The name of the source audio file is listed, when known.[Audio files needed]

The following are phrases that the Ducky Splicers will say in BioShock 2. The name of the source audio file is listed, when known.[Audio files needed]

Picked Up with Telekinesis[]

Ducky is dressed in the full waterproofs and boots of an early to mid 20th-century policeman or possibly even a firefighter. His uniform has decoration around his cuffs, a chest protector with five buttons on each sides, and one button securing his waterproof hood. The damaging effects of Splicing and the Civil War, have warped his mind and features. His face and hands are scarred, wrinkled, and blistered as if he had been badly burned. Almost all models seem to be suffering from vitiligo. Both his eyes are cataracted or nearly blind and an unhealthy, jaundiced color. His uniform is badly tarnished, especially along the lower torso area. Ducky can wear a grime covered white, mud covered black, or blood covered black peaked cap with a shell shaped badge as an accessory.

Model 1: The primary model wears a rust red outfit. His cuffs are scarlet, his chest plate is olive drab, and his buttons are white.

Model 2: This model wears an olive drab outfit. His cuffs and chest plate are red, and his buttons are white. His face is an unnatural pale purplish grey.

Model 3: This model wears a blackish navy blue outfit. His cuffs, buttons, and chest plate are a dark taupe color. He has a burnt, ruddy complexion and a dark substance dripping from his mouth and nose.

Model 4: This model wears a white outfit. His cuffs and chest plate are a dark red, his boots are a pale moss green, and his buttons are greenish grey. The side of his outfit has large dark red pockets.

Model 5: This model also wears a white outfit just like the other model. This one's chest protector, cuffs, and pockets are the same color as the rest of the rain slicker, so it looks like he doesn't have them. His pallor is a sickly green and he has white fluid dripping from his mouth and nose.

In BioShock 2, the skins for the model incorporate several variations, such as hood and hoodless, three different faces, and four different uniforms. What's most noticeable about the Ducky models in comparison to other Splicers is that two of the variations do not appear to be Splicers at all, and are more similar in appearance to Rapture Citizens.

Like the duckies who patrolled the streets of Rapture in 1960, these men wear long waterproof coats with thick boats. They also wear leather gloves and some carry a whistle and a holster for their gun. The cap they wear may sometimes come with an attached hood.

Two different faces of BioShock 2's Ducky, compared side by side.

Model 1: A hooded Ducky in a brown uniform with a lighter trim, his gloves, belt and holster are black. He shows no visible disfigurement other than a possible case of Jaundice. He appears quite tanned with light grey stubble.

Models 2: A hooded Ducky who has a cleft lip and a scar through his nose. His disfigurements include what may be a similar "skin mask" to the one worn by the Waders in BioShock, with thick stitches surrounding his right eye. His uniform is the same color as the previous models, but much grittier. One of his sleeves is torn open, revealing small growths forming, and the ends of his uniform are torn and jagged, part of his uniform also hangs loose. The fingers on his left glove have been torn off and his whistle is rusted.

Model 3: A hoodlees Ducky with no disfigurement, he is dressed in a pristine white uniform with a brown trim and belt. His buttons are yellow and he wears grey gloves. Unlike other models he carries no holster or whistle, and as no visible belt buckle.

Model 4: A hoodless Ducky who has little visible disfigurement of Splicing to speak of, though he appears to have been in a bit of a brawl. There is some blood coming from his mouth and he sports a black eye and a scar on his cheek. He wears a navy uniform with a white trim, and black gloves, holster, and belt, with silver buttons and belt buckle. He is also clearly a more staunch supporter for The Rapture Family, as a closer look of his attire shows a Butterfly on his belt buckle and sleeves, and a butterfly tattoo on the right side of his neck, while the other models may just wear the Blue butterfly pin in random encounters. 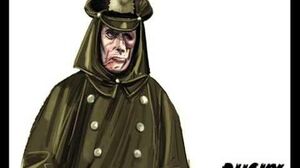 Dialogue for Ducky in BioShock. 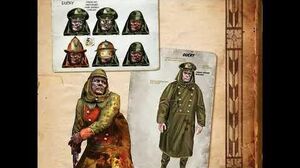 More dialogue from Ducky in BioShock. 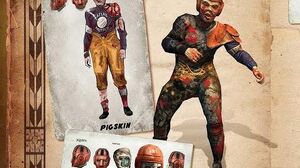 Bioshock Deleted & Rare Dialogue Quotes for Ducky and others.

The original concept sketch for Ducky.

An alternate concept for Ducky.

Concept art of headgear for Ducky.

The in-game model as seen in BioShock. 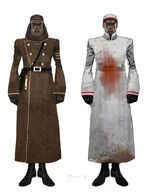 The two versions of Ducky in BioShock 2. 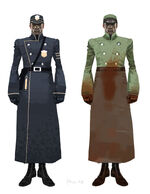 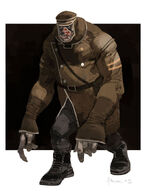 An idea for the Brute to wear the outfit of Ducky from BioShock 2.

Close up on the spliced Ducky's face.

A Electrified Ducky in Hephaestus.

A Ducky in Olympus Heights. 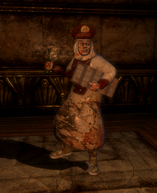 A "Ducky" Nitro Splicer with a Molotov Cocktail.