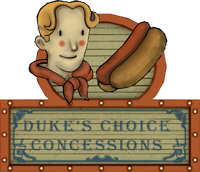 Two Duke's Choice Concessions spots can be found on Main Street of Soldier's Field: A food cart by Dimwit & Duke Ice Cream Shoppe and a food booth by the elevator to the Hall of Heroes. Due to the fact that the Hall of Heroes is closed until further notice by the Columbia Police Authority, only the cart is open during the time Booker DeWitt and Elizabeth arrives. The Hot Dog Vendor proudly advertises the hot dogs and Booker can choose to buy one for 1 Silver Eagle, which he will consume.

Another Duke's Choice Concessions booth can be found in the ticket shop at Patriot's Pavilion, next to a Cigar Shop kiosk and like the latter booth, it is also closed.

The booth by the Hall of Heroes elevator.

Duke's Choice Concessions in Patriot's Pavilion.
Add an image to this gallery

Retrieved from "https://bioshock.fandom.com/wiki/Duke%27s_Choice_Concessions?oldid=309540"
Community content is available under CC-BY-SA unless otherwise noted.