The BioShock Infinite: Early Bird Special Pack is a downloadable content pack for BioShock Infinite which contains four pieces of Gear, a Machine Gun and Pistol upgrade, special skins for both weapons, and five Infusion bottles. It is exclusive to the BioShock Infinite Season Pass and BioShock: The Collection. The Early Bird Special Pack is activated upon entering The Blue Ribbon restaurant in Comstock Center Rooftops. Here, the weapon skins will be activated, the four pieces of Gear will be on a table, and the five Infusions can be found on the bar and another table.

These four pieces of DLC-exclusive Gear can be found in The Blue Ribbon restaurant between the Raffle Square and the Comstock Center Rooftops sections. As you enter the main tavern/parlor area, the Gear boxes are on a table to your right.

Electric Punch: 70% chance that a melee target is stunned. Victim is vulnerable for four seconds. (An upgrade of Electric Touch)

Ammo Advantage: Increases all weapon clip sizes by 75%. (An upgrade of Bullet Boon)

Ghost Soldier: Killing with a Vigor trap has a 70% change to cause the enemy gun to become a ghostly ally for a few seconds. (An upgrade of Ghost Posse)

Eagle Strike: Increases weapon damage by 50% from Sky-Lines. (An upgrade of Death from Above) 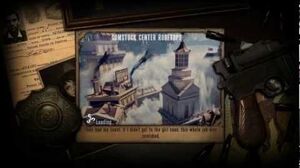