For the enemies encountered in other games, see Splicer.

“What's happened to these people... They don't even seem sane.”
― Elizabeth[src]

The Early Splicers in Burial at Sea are precursors to the later ADAM-mutated, war-scarred enemies faced by Jack, Subject Delta, and Subject Sigma. These Splicers have been locked up in Fontaine's Department Store, and many have already lost their sanity. Their manic craving for ADAM has them seeking the few remaining drinkable Plasmids. They also suffer from injuries they received from fighting both against the Rapture authorities and among themselves.

Even before the ADAM shortages during the Rapture Civil War, Splicers became mentally and physically unstable due to degenerative effects of long-term ADAM use. Many citizens who used Plasmids and Tonic enhancements for extended periods showed little visible sign of genetic or mental damage before the war, if they could afford the supply of ADAM they needed or surgical procedures to remove disfigurements. Some of these Splicers can be seen in Market Street and High Street, such as the waiter assisting customers at Le Temps Perdu, and a man attracting the opposite sex with his spliced aesthetics.

Underneath the surface of Rapture's upper class areas, dangerous Splicers did already exist. Rogue Splicers, many of them from Fontaine's gang, were locked away in Fontaine's Department Store after Andrew Ryan and the City Council seized and shut down most of Fontaine's businesses. With their connection to Rapture's ADAM supply cut off, the Splicers grew more and more deranged. Many are either firearm-wielding enemies, melee weapon-armed assailants, or a newly seen Splicer type: the Frosty Splicer. Being cut off from the rest of Rapture before the 1958 New Year's party, these Splicers lack the distinctive masquerade masks seen in earlier games, so they've made due by fashioning their own impromptu masks. Most of the male Splicers can be seen wearing wooden crates or crudely cut-out poster images of brands like Hop-Up Soda, Circus of Values, and Meal-Time Frozen Dinners, as masks. Some female Splicers hide their faces with heavy makeup or masks that are either domino-like or a facial prosthetic patch.

Splicers encountered in Burial at Sea may seem similar to the Leadhead and Thuggish Splicers in BioShock in terms of armament and personality, but as far as attack strategy (aside from the special Frosty Splicers) they're far closer to the enemy combatants encountered in Columbia from BioShock Infinite.

Much like the Thuggish Splicers of BioShock, these enemies are armed solely with a variety of melee weapons. They wear padded leather vests with ammunition belts and leg guards on their shins. Whether using pipes, clubs, giant pipe wrenches, or bats, these Splicers will charge at the player and deal a heavy blow. However, unlike their future brethren, they are not as agile (i.e. jumping and hitting), acting more akin to the baton-using Soldiers of Columbia (dodge and hit and run), and are only male. They are the most prevalent Splicers.

These Splicers arm themselves with firearms. However, unlike their later kin who only use Pistols, Machine Guns, and Shotguns, these Splicers wield a larger variety of weapons:

These Splicers are not as disfigured as those met during and after the Civil War, but they do show the characteristic mental instability associated with ADAM abuse, as well as various severe injuries from fighting Ryan's forces and each other. However, unlike the Splicers back in Rapture proper, the prisoners were not able to get any plastic surgery towards their ADAM deformities, as they didn't have access to the Medical Pavilion. Despite the fact that their personalities are chosen at random, there are 5 body models that those Splicer personalities use, four for the Male Splicer and one for the Female. Each model has a number of heads that is randomly selected, similarly to the models used for the Rapture Citizens also seen in Burial at Sea. There are three heads for the Males and two for the Females.

The Male Splicers also have three different heads that can be used for each different combat type.

The female model appears to be the most far-gone judging from her personalities as splicing has made her forget about her current situation. The female, like all Splicers, is both insane and grotesque as her face is covered with blood and smeared lipstick. Her most notable accessory is her "mask." Which in fact, is paper mâché with the facial features painted on with makeup which covers the extreme facial injuries she received during the violent past month. The mask can either cover her left eye or both of them.

Her scalloped dress is either blue, red, or white, with blood splatter and a ripped cap sleeve. She wears a pearl necklace, a glove on her right hand and pink peep-toe kitten heels.

Quotes from Both GamesEdit

Based on Edith Crenshaw, this prudish, overprotective mom's primary focus is her child's activities and wellbeing. She pictures herself self-sacrificing and nurturing, but in reality her actions are possessive and restrictive.

A male singer who's been out of work for some time, but hasn't let that spoil his ego. In scripted events, the game's files name this character Charlie Montag.

Based on Shirley Womack, this obsessive compulsive woman's primary concern isn't being locked in the Department Store, but rather, of all the germs within the space.

A guy who just won't take "no" for an answer plans how he'll reunite with his special lady. In scripted events, the game's files name this character Sam Barlow.

This delusional Splicer fancies himself a sales whiz, even if the numbers don't reflect this. In scripted events, the game's files name this character Frank McCallum.

This male character appears to be a doctor of psychiatry who advocates for the survival of the fittest and evolutionary superiority no matter the cost. In scripted events, the game's files name this character Doctor Radegast.

This businessman is willing to do whatever it takes to thrive, even if it's technically illegal.

This female teacher worked at the Ryan the Lion Preparatory Academy. She hasn't fully come to terms with what's happened and still recites her lesson plan aloud. In a scripted event, the game's files name this character Mrs. Rosen.

A woman who recites her prepared speech for the Miss Rapture contest. In a scripted event, the game's files name this character Midge Dumont.

A close-up of one of the female Splicer's mask variations.

A Splicer riding the Pneumo Line.
Add an image to this gallery 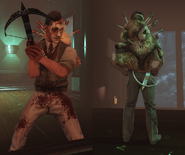 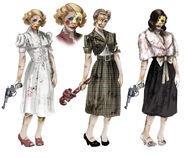 Concept art for the female Splicers trapped in Fontaine's. 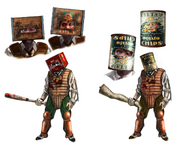 Concept art for the male Splicers trapped at Fontaine's.

The faces of ADAM addiction. 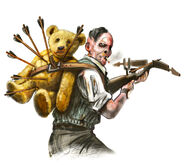 Art for the crossbow Splicer, with a teddy bear on his back. 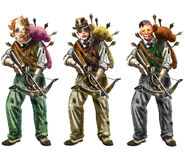 Variants for the crossbow Splicers.

Concept art for the alert icon, seen above alerted enemies in Burial at Sea - Episode 2.
Add an image to this gallery

Retrieved from "https://bioshock.fandom.com/wiki/Early_Splicers?oldid=322173"
Community content is available under CC-BY-SA unless otherwise noted.