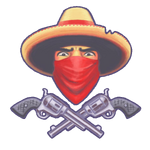 As the player progresses further into Rapture, different types of ammunition become available. Quantities of some advanced types of ammo in a machine may be limited. Inventable ammo, such as Electric Gel and Trap Bolts, are not sold by the machines at all. The machine will show how much of each type of ammo is being carried by the player, and what the carrying limit is, so unlike the U-Invent machine, the risk of buying more than its limit is minor. (It is possible to be carrying near the limit and buy more than the limit. The excess will be left at the machine.) If the player is at the limit, the ammo will be grayed out in the machine's listing of ammo.

Ammo machines have the same icon on maps as Circus of Values machines, meaning that the player has to visit them to know which is which.

The machines offer lower prices by hacking. The Vending Expert Gene Tonics can also be used to lower the prices.

In BioShock 2, El Ammo Banditos appear aged by rust and water damage. Vandalized machines have a hole torn on the image that exposes its linear fluorescent bulbs. The dollar symbol below the coin slot has been replaced with an embossed letter 'A'. These Vending Machines, as well as the variety of ammunition they sell, become more plentiful. While Circus of Values will sell the player some varieties of ammo, their selection is extremely limited by comparison.

In BioShock 2, El Ammo Bandito Machines have their own map icons, as corrected from using the same icon as the Circus of Values Vending Machines in BioShock.

Concept art and model for the vending machine, by Mauricio Tejerina (the Circus of Values and El Ammo Bandito uses the same machine model).

The vending screen in BioShock.

The vending screen in BioShock 2.

The vending screen in Burial at Sea.

A Splicer learns why vandalism can be dangerous.