“We’re going to Emporia. And then, we gon’ see what it takes to rouse them from their slumber.”
― Daisy Fitzroy[src]

Emporia was home to the wealthiest citizens of Columbia, including its founder, Zachary Hale Comstock. It is the largest stronghold for the Founders in the city as Shantytown is for the Vox Populi. 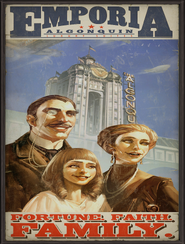 Emporia seemed to contain the heart of Columbia itself, housing the city's upper class and also Comstock House, which can be seen even on the outskirts of the district. It has tall stately buildings and towers, with narrow streets and seemed to resemble a smaller, floating New York.

The district's main transportation hub was the massive and elegant Grand Central Depot where people could peruse the numerous shops and restaurants within the station or in Downtown Emporia as well as board a gondola or hovercraft at Port Prosperity to other areas.

“Excuse me…if there is anyone who can hear the sound of my voice… These are dire times and I could ever so use your aid… I hope no one has forgotten about me here… Er, ah… Now, back to the music…”
― Radio Announcements[src]
Main article: BioShock Infinite

Booker DeWitt and Elizabeth accidentally end up in Emporia after their airship had been taken down by Songbird. At this point, Emporia is nothing but a war zone due to the presence of the Vox Populi as Columbian citizens are being evacuated onto airships. A dead, alternate Booker Dewitt had led the Vox Populi attack on Emporia, leaving behind several Columbian politician's scalps nailed to a board. As a result, the Vox Populi control the majority of Emporia, with red banners and paint covering most of the downtown area. As Elizabeth and Booker move on, they find that all citizens not on the evacuating airships are either in hiding or dead.

The district's main transportation hub. It had a large, roomy interior and included a Founders Books outlet. A gondola could fetch people to and from the lower districts.

As a bar, this is one of the local places for the big spenders to hang out. The kitchen can be unlocked by hitting a secret button underneath the counter.

The bookstore in Grand Central Depot. It has a lounge room for reading in the basement.

Concept art for an Opium Den in Emporia, by Ben Lo.

An advertisement promoting the shops of Emporia.

Map of Emporia's downtown connected via the Grand Central Depot

A pristine version of the map.

Elizabeth gazing upon The First Lady, crashed in Port Prosperity.

Booker glancing in the direction of Comstock House.

A fight between realities.

Waltz on a billboard.

The Vox leaving their mark.