The Emporia Towers are a set of upper-class residential and shopping buildings, located on Harmony Lane in Downtown Emporia of Columbia.

The two buildings were a popular place among the Columbia Citizens, known for their quality products and luxurious housing, with a homey pub close by.

The following are the residents who once called the Towers their home, listed on the directories posted above the letterboxes: 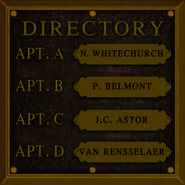 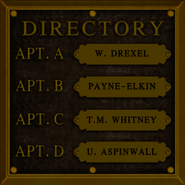 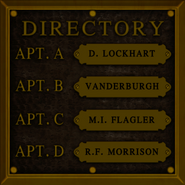 The Vox Populi uprising has devastated all of Emporia, including the Towers. When Booker DeWitt and Elizabeth pass through Harmony Lane, they may visit the buildings, though it is optional.

This stylish main building housed both shops and living spaces. One of the ground floor entrances is gated, but the other can be opened with a simple hairpin. The duo are not the first to arrive as the whole reception area is vandalized. As soon as they enter, two nearby Vox Soldiers will come running in.

The counter lays empty as the receptionist woman has been killed. Five portraits of important members from The Founders party hang on the walls, of which one has been torn down. The player is unable to access any of the other floors as the two elevators are unusable: One is on fire and the other is just an empty electrified shaft. The only noteworthy item is a Lockpicking Kit by the elevators.

A second residential building is located further down the Lane. Just like the main building, only one of the doors of the apartment building is accessible, requiring three Lockpicks.

As the doors open, a citizen comes out of his hiding place. In a desperate attempt to protect his life, he attacks, believing that Booker is one of the Vox.

The first floor was mainly used as a storage area and for mailboxes. There is a couch near the stairs up, with a Medical Kit, a Salts bottle and someone has written "Hoarder" on the floor. The stairway is blocked by furniture, likely as a blockage made by survivors upstairs. During the commotion, a Gear was included in the makeshift barricade.

Another view of the interior.

The crashed and burning elevator.

The interior of the apartment building's first floor.

The stairs leading to the apartments.

The blocked of stairway.
Add an image to this gallery

Retrieved from "https://bioshock.fandom.com/wiki/Emporia_Towers?oldid=301456"
Community content is available under CC-BY-SA unless otherwise noted.