The citizens of Rapture must inevitably pass on, and the Eternal Flame was built to accommodate families and their dearly departed. While religion was not openly encouraged in the city, private services and funeral rites are a part of any large community. The Twilight Fields was located conveniently nearby, and could send its customers to the Eternal Flame for final treatment of the dead. During the Rapture Civil War, the facility had security installed, like most buildings in Rapture. The Crematorium had a Security Camera on the lower level to watch for possible looters.

When Jack first approaches the entrance to Eternal Flame, a Baby Jane Splicer is demanding to be let in, only to be blown up by a Nitro Splicer. The Nitro Splicer needs to be dispatched to prevent further hassle.

The entryway of the crematorium is a reception area which hosts a memorial for Winston Hoffner. Two portraits of Hoffner stand at either end of the small reception room; one with several artistic alterations put over it by Dr. Steinman. An Audio Diary of Steinman's can be found hanging from the altered portrait.

The main room of the crematorium's lower level holds the facility's cremation furnace, guarded by a Security Camera. A female corpse lies on the tray in front of the open furnace door. Pressing a button on the side of the furnace sends the body into the flames. When it comes out again the Hacker's Delight Physical Tonic rests in the ashes.

The upper level of the crematorium houses several cold storage lockers, similar to those in the Twilight Fields, which would contain bodies intended for cremation. A few scant valuables can be found throughout the room. The floor around the Supervisor's Office is covered with spilled oil.

The office can be accessed by crouching through a small vent beside the door. On entering the office, Andrew Ryan is heard placing a large ADAM bounty on Jack's head. Inside the office a broken Gatherer's Garden lies on its side. Beside it, an Incinerate! Plasmid bottle rests on the floor. On picking up Incinerate!, several Splicers come to surround the office and try to break in. The oil slick around the office trails in through the vent, allowing the Splicers to be dispatched by using Incinerate! to set the oil on fire, catching them in the flames.

After obtaining the useful Plasmid, Jack can leave the facility.

An advertisement for the Eternal Flame Crematorium can be seen near the top of a skyscraper as Jack later rides an elevator to the top of Point Prometheus (picture above).

Walking into the Crematorium. 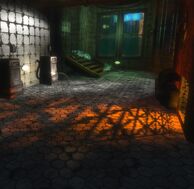 The fuel tanks for the furnace.

A look at the furnace and the exit.

The Security Camera and the stairs to the upper level.

A Gatherer's Garden inside the Supervisor's Office.
Add an image to this gallery

Retrieved from "https://bioshock.fandom.com/wiki/Eternal_Flame_Crematorium?oldid=305385"
Community content is available under CC-BY-SA unless otherwise noted.