Transcript: One man goes into the waters of baptism. A different man comes out, born again. But who is that man who lies submerged? Perhaps that swimmer is both sinner and saint, until he is revealed unto the eyes of man.

Location: In the garden to the right of Chas. A. White Supply, on an umbrella-covered table. 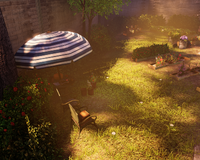 Behind the Scenes Edit

Retrieved from "https://bioshock.fandom.com/wiki/Everyman,_All_at_Once?oldid=267008"
Community content is available under CC-BY-SA unless otherwise noted.