“Watch him. His body is shutting down now, naturally… but if he dies of trauma, he will return elsewhere. Full restraints at all times. No one enters this room until he expires.”
― Sofia Lamb[src]

The Examination Rooms is part of the Entryway to Outer Persephone. Subject Delta finds himself here during his continuing mission to find and rescue Eleanor Lamb from the clutches of the Rapture Family.

Because of its nefarious purpose, Persephone had to be kept a strict secret and remain utterly cut off from the rest of Rapture. Prisoners were corralled through the secret entrance to the penal colony, but rather than be directly taken to the Holding cells they were first processed here. Despite having access to a perfectly suitable Infirmary, the facility's staff would want to stem the risk of a contagious outbreak in the close quarters of the prison, so the newly arrived political prisoners would be brought to the Examination Rooms and given a thorough screening.

After leading a revolt against the prison staff, Sofia Lamb and the members of the Rapture Family took control of the facility. She used the examination rooms for her own purposes including indoctrinating new candidates by strapping them down and forcing them to watch television monitors.

After locating the hidden entrance to Persephone in Fontaine Futuristics, Subject Delta takes the elevator down to the Rapture's secret internment camp. Sinclair comments on how Eleanor must be held here.

Delta enters the Persephone building and finds the place to be even worse shape than what's already been seen. The corridor is dimly lit, it's partially collapsed, large chunks of rubble cover the floor, and the drains are backing up. Sofia Lamb contacts him via the radio hinting that he is charging blindly into the institution's bowels with ignorance. A Power to the People machine is located on the left.

The end of the hallway forks. The path to the right leads to some other part of the facility, but it's collapsed and flooding. Only an El Ammo Bandito and a Circus of Values Vending Machine are accessible. The left way is covered in graffiti referencing "The Upside Down House" and a welcome. Signs lead to a Quarantine Area and a Holding Room. The Holding Room can be explored and features three gurneys where patients would be strapped down and forced to watch television monitors. However, Delta must locate Eleanor first in the Quarantine Room. Outside past the room is a disabled Security Bot which can be hacked.

“This Little Sister's brought you something that will allow you to take control of her.”
― Eleanor Lamb[src]

In a desperate act to prevent Delta from continuing to manipulate Eleanor, Sofia Lamb proceeds to smother her daughter in the Quarantine Room forcing him into a coma. Delta awakens, strapped to a table in the Examination Rooms. Sofia Lamb expects him to expire shortly, but cautions the Family not to let anyone in or out of the room until then.

His perspective suddenly shifts to the Little Sister's. Delta now sees his holding room as an idealized vision with leaking ceilings and sterile walls transformed into gossamer and velvet. His former body is clad in a covered in a golden suit of armor embellished with jade and art deco filigree.

Delta climbs out of the room through the vent. A pair of Brute Splicers can be seen stationed outside the window of the room. When viewed as a Little Sister, they are seen as stately gentlemen in tailcoats. Delta journeys through the rest of Outer Persephone to unlock the holding cells and gather pieces of a Big Sister suit to aid Eleanor. After using the control lever in Sofia Lamb's office, the Quarantine Room and Delta's holding cell will be unlocked. If the player ventures back here while still as a Little Sister, the hallway outside Delta's room leading back to the beginning of the level will be blocked off by a wall and a fallen abstract statue of a woman. Several Dollars can be found at the base, however.

After locating pieces of the Big Sister suit in the Cell Blocks, Delta is able to help Eleanor escape from her Quarantine Room. Depending on Delta's treatment of the Little Sisters, Eleanor either harvests or rescues the girl, which restores Delta to his body in the Holding Room. Clad in the Big Sister suit, Eleanor takes out the guards, walks in, and releases the restraints. She then offers a special Plasmid that will summon her to aid in his battles in the future. Outside, a Little Sister Gift contains some supplies.

The Gift left for Delta outside the Examination Rooms. 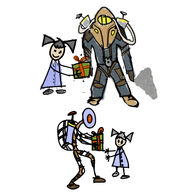 A present for daddy.
Community content is available under CC-BY-SA unless otherwise noted.
Advertisement