“Booker, if the Vox get their weapons, there's going to be a revolution just like Les Misérables!”
― Elizabeth[src]

The Factory is the primary manufacturing center and headquarters of Fink Manufacturing in Finkton. Booker DeWitt and Elizabeth must charge in with the Vox Populi to reach The First Lady and escape Columbia.

Most of the production of Fink Manufacturing was done inside the Factory, from Vigors to vending machines. During the Vox revolution in July 1912, Finkton was taken over by the rebels who, after assaulting the Bull Yard in Shantytown, went after the Factory and Jeremiah Fink himself. Daisy Fitzroy was leading the operations from The First Lady.

Booker DeWitt and Elizabeth have passed through a Tear and entered a reality in which the Vox Populi have the needed weapons to initiate a revolt against Fink Manufacturing. Booker and Elizabeth follow the assaults of the rebels with the intent on retrieving The First Lady from Daisy Fitzroy and escaping Columbia. The latter has docked itself to the top of the Factory to attack it from another angle.

From the Plaza of Zeal, Vox fighters tear open the gates to the Factory and charge into the courtyard to the Factory. They immediately encounter massive resistance from Founder soldiers, Gun and Rocket Automata, and Motorized Patriots. Booker has to fight alongside the Vox in order to progress. Elizabeth can summon cover, a Rocket Automaton, and a crate of Medical Kits to aid in the battle.

When finally reaching the Factory's entrance, a Security Zeppelin mounted with an automatic Barrage Automaton appears and bombards the area, killing many Vox Populi in the process and keeping anyone from entering the building. Using the nearby Sky-Line to reach the Zeppelin, Booker has to fight his way through its defenses and crew aboard and sabotage the engine with his Sky-Hook. Booker then dives from the Zeppelin as it falls out of the sky and uses the Sky-Line to reach the ground safely. The Vox chant Booker's name in celebration as they unlock the gates and Elizabeth praises his valor before they force their way inside the Factory.

The main hall of the building has been hit by the attacks of the Vox. Gunships commandeered by the rebels blast through the windows and the fighters storm in. Together, they defeat the last defenses guarding the building. A Vox Beast fires an RPG rocket at the Fink MFG sign when the battle ends. At the base of the tower, one elevator leads to Fink's office, the other to the Factory Proper. There's a locksmith bag and a piece of Gear in the area.

Booker boards an elevator to the top while the Vox Populi celebrate and recoup. The various manufacturing floors of the factory can be seen through the elevator, showing Vigors, vending machines, furniture, textiles, security automata, generators and even toys being made. Elizabeth thinks back to Chen and May Lin's deaths and laments the role she played in it, Booker attempts to comfort her, but the lift suddenly comes to a halt. Daisy Fitzroy phones DeWitt and calls him an "impostor," as Booker in this alternate universe was killed during the revolt as a martyr to the Vox cause. His unintended presence alive is a hindrance to the cause, and Daisy sets her men against him.

On top of the Factory is Fink's office which the Vox had already entered through the docking platform outside, thanks to The First Lady. The place has been ransacked and Fink's personal guards killed. All Vox fighters on this floor have been alerted by Daisy, and Booker has to fight his way through them before reaching the rooftop.

Fink's private docks outside his office allowed for personal transportation directly to his office. After the Vox docked their aircraft, they cleaned the top floor and dragged Fink and his son to the docking station. As Elizabeth arrives, she observes Daisy Fitzroy shoot dead Jeremiah Fink in cold blood inside the station, before ordering her troops to kill DeWitt. A wave of enemies then arrives on the platform, including Heavy Hitters such as a Fireman and a Handyman. A Sky-Line circles around the area and provides a good way to escape them. Once all enemies are defeated, Booker helps Elizabeth crawl inside a vent to prevent Fitzroy from killing Fink's son. Elizabeth left without any other option stabs Daisy in the back with scissors, who then collapses on the floor. The two then board the airship and leave Finkton, with Elizabeth traumatized by the murder she just committed.

Early concept art for the Factory, by Chad King. 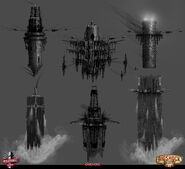 Variations for the Factory's design. 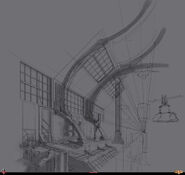 An unused foundry area of the Factory.

An early take on the Factory. Note the American flags in the scene.

A early version of the Factory.

“Never thought I'd come back to Columbia, let alone to that exact moment...”
― Elizabeth[src]

In Burial at Sea - Episode 2, Elizabeth goes back to the Factory from a Tear in Rapture in order to retrieve a Lutece Particle from The First Lady and help Atlas escape Fontaine's Department Store.

Elizabeth arrives a few moments after the arrival of Daisy Fitzroy and her troupes atop the Factory. She finds herself alone in The First Lady and use this occasion to steal a spare Lutece Particle from the airship's engine room. However, as soon as she goes back to the Tear, Suchong maintains it close to force her to go inside the Factory and retrieve for him a hair sample from a disused facility of the Fink MFG Research Laboratories.

Inside the docking station, Elizabeth forces herself out by crawling through vents. There she witnesses a strange conversation between Rosalind Lutece, her brother Robert and Fitzroy, while Fink and his son are sequestred next to them. The twins are asking the Vox Populi leader the ultimate sacrifice, and imply that it is her choice only. Outside on the docking platform, several Vox soldiers are patrolling the area, anxious of the events to come. Nearby is a cargo zeppelin filled with Fink's valuables.

When she comes back with the sample, Booker DeWitt and herself from the main timeline have already left with The First lady, leaving the Tear at the edge of the docking platform.

The office is empty except for a few patrolling Vox Populi. On of the doors leads to Fink's private quarters.

Located next to his office, the private quarters are linked together by a large room containing Fink's Life Clock, a large clock mechanism that unlocks one of four different doors depending on work time, which is where the hands are currently pointing. The clock can be manually adjusted by inserting a winding crank into the big hand in the center. The adjacent rooms lead to Fink's bedroom when residing at the Factory, a private chapel which the businessman devastated himself out of drunken anger, his living room for leisure and finally a private elevator leading to the Research Laboratories. While going down to the laboratories, Elizabeth witness Booker and herself going up to the office in an adjacent elevator, completing their own circle of events.

The facility consists of a hub where the main researches on ADAM and its products were conducted, the Surgical Suite where human subjects were turned into the grotesque Handymen, and the quarantined Imprinting Studies. The latter is where Fink was conducting research and experiments to perfect Songbird and its bond to Elizabeth. These part of the laboratories were eventually condemned after the bond was performed. this part of the Factory was invaded by Vox Populi who came storming in with Gunships. The laboratories' sentinels have all been dealt with and no scientists remained inside.

The Tear leading back to Rapture.

The Prayer room with statues of the Founding Fathers.

A Boy of Silence helmet found in the Handyman Operating Suite.
Community content is available under CC-BY-SA unless otherwise noted.
Advertisement