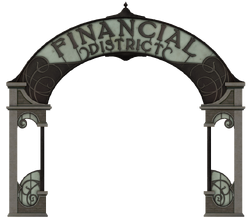 “Look. The Vox are tearing this place apart.”
― Elizabeth[src]

The Financial District, or the Thoroughfare, is a docking point in Downtown Emporia of Columbia. It connects the Grand Central Depot with the Market District and Harmony Lane. Its most prominent landmark is the Bank of the Prophet.

When Booker DeWitt and Elizabeth leave in the elevator from Grand Central Depot, the elevator is hit by stray artillery, forcing them to jump out. They then find themselves caught in the midst of a struggle between the Founders and the Vox Populi. As the battle escalates, a Handyman jumps on to one of the Vox's aircraft and joins the fighting.

The formal entrance is set on a lower platform, near the Market District. Two elevators span from two smaller clock towers, the destroyed one of which was used by Booker and Elizabeth. A bottle of Salts and a small Medical Kit is set by a statue of Columbia near the edge. An additional supply of Salts can be brought in through a Tear. The Map of Emporia is set up in front of the gated entrance.

The Thoroughfare is in the middle of the whole facility. It has an angel statue in the middle, covered in red cloth. Straight ahead is the portico and entrance to the Bank of the Prophet. The Market District is to the right and Harmony Lane to the left. The player can bring in a Mosquito with the help of a Tear to assist in battle. On the roof of the portico to the bank is the corpse of a Sniper-wielding Columbia Citizen, with his gun beside him. Two sets of stairs on each side of the Docking platform lead downwards, likely used as an observation platform. Down there is a Crank Gun Tear. Right outside the gates to the Market District is an ambulance with a corpse, Salt bottle and a Medical Kit Tear. Nearby is also a Water Puddle Tear and a Weapon Locker, containing Shotguns.

After the visit to Lady Comstock's grave, the Vox Populi have gathered a bunch of policeman corpses and stacked them under the portico of the bank and then lit the men on fire. A Gun Automaton can be brought in with a Tear, but will disappear after the fight with the enemies inside the bank is over.

The Bank of the Prophet is the largest bank in Columbia. When approached, the bank is locked, but can be opened with a hairpin. The lobby is dark and besides the three Kinetoscopes, there is not much of interest, since the elevators are locked.

However, upon returning from the Memorial Gardens, the stairs are suspiciously covered in crows as a warning for the two Zealots of the Lady, a Fireman and a bunch of Vox Populi that burst out from the doors. Several policemen have been executed in the lobby. Courtesy of the busted elevator grates, Booker and Elizabeth can enter the bank vaults to find one of the secrets of Lady Comstock.

A small shopping arcade is to the left of the Bank of the Prophet. There are four stores located here: Patriot's Pride, Parker & Co. Excelsior Brand Canned Meats, and Founders Books. On the short walkway to it; A gunned down policeman rests beside his wagon, with a Decoy Tear by their side. Not far from them is a Medical Kit Tear. Three of the stores has been vandalized by the Vox Populi, with red cloth hanging from them. Patriot's Pride has open doors but a cabinet blocking the way. Parker & Co's sign has fallen but the doors are gated. Founders Books' sign is painted in red and books are covering the entrance. All three vending machines (Dollar Bill, Veni! Vidi! Vigor!, Minuteman's Armory) are set up by the stores. Closer to the edge is another docking point with a corpse beside a wheeler, a Vox Burstgun leaning on the fence and the gated way to Harmony Lane, which can be unlocked with a hairpin.

The balcony over the shops is only accessible with the Sky-Line and doesn't seem to have any alternate way up. Volley Guns and RPGs can be brought in with Tears and a bottle of Salt is sitting on a crate.

The two looked doors lead to a small storage area, owned by the bank, which contains: A Heater, its ammo, a Hand Cannon, its ammo and the Voxophone "A City, Suspended" by Rosalind Lutece. One door is gated but the other can be opened with two Lockpicks.

The crashed elevator by the Grand Central Depot entrance.

The elevator Booker and Elizabeth use to enter, destroyed by a missile.

A view of the assaulted Grand Central Depot.

The centerpiece of the thoroughfare, a defaced statue of Columbia.

A Mosquito summoned through a Tear fires on Vox Populi soldiers.

A dead Columbia Citizen, who seemingly protected the area with a Sniper Rifle before he was killed.

The shops at the Financial District.

The trashed and abandoned Founders Books.

Patriot Pride after the Vox ambush.

The balcony above the shops.

Inside the locked storage on the balcony.

The dock by the entrance to Harmony Lane.

The Vox Security Zeppelin looking over the district.

The Handyman emerging, destroying a Gunship.

The Handyman on top of the Bank of the Prophet roof.

Fallen policemen being set ablaze.
Add an image to this gallery

Retrieved from "https://bioshock.fandom.com/wiki/Financial_District?oldid=321452"
Community content is available under CC-BY-SA unless otherwise noted.