Finkton is an expansive workhouse in Columbia and the location of Fink Manufacturing. The entirety of the district (the second largest in the city) is a factory town that also serves as a prison for Columbia's criminals. Much of it is dominated by factories, ornate clock towers, and gilded statues of Jeremiah Fink, all centered on the Fink MFG headquarters. Many of the district's inhabitants live in poverty and starvation, due to Fink's exploitative business practices.

The main docking center for airships and cargo crates entering the district. Sky-Line rails come in and out of the district. Fort Franklin is connected to Finkton Docks. Here Booker finds himself stranded without transportation and without Elizabeth after an encounter with the Vox Populi and their leader Daisy Fitzroy.

The main structure that dominates the docks. A large building featuring a massive image of Fink and projectors displaying Fink propaganda. It is primarily used as a cargo depot and warehouse.

An area where Finkton's working force is "educated" on Fink's business ideology in order to ensure that they never waver in loyalty to Fink or the Founders.

The place where workers attempt to enter for jobs at Finkton. By the time Booker and Elizabeth arrive, the center is not currently seeking any jobs. As a result, the two resort to illegal entry.

Centered around a large clock tower, this central plaza in Finkton is open to a number of different workshops, including Chen Lin's Gunsmith Shop. A central stage houses a daily auction where workers bid for repair jobs in the shortest amount of time. Tram tracks leading to the factories criss-cross the plaza.

A club functioning at the surface level as a place of entertainment for Fink's higher-level workers. The facility primarily serves as a means of keeping workers in check. A prison, various storage units, and a torture chamber are housed in the basement.

Worker housing for employees of Fink Manufacturing. Driven to intense poverty by Fink's low wages and harsh hours, many of the workers here are ill and malnourished. It is also the location of the Bull House Impound and the Graveyard Shift Bar.

Jeremiah Fink's headquarters and the center of Fink Manufacturing's product development, including Vigors, vending machines, security automata, and more. It is also where the Handymen and the Songbird were created, deep inside Fink's private research laboratories. It is here where the Vox turn much of their attention as they begin their violent revolt; assaulting, taking over, and looting the place. 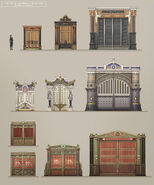 Various concepts for location specific doors, the bottom row being for Finkton.

Concept art for a Finkton building with a giant clock.

An advertisement for employment at Fink Manufacturing.

The First Lady Over the facility.

Finkton during the Vox revolution.

A view of Finkton from above the clouds.