Finley is a company in Rapture that is advertised prominently on the outside of various buildings. Advertisements for it can be seen in almost all of the entertainment and residential districts of the city. Businesses associated with the company moniker are Finley's Eat-In Take-Out and Finley's Pub.

An advertisement for one of Finley's restaurants is first seen when Jack crosses the tunnel for the Bathysphere Station. Because of the tunnels destruction by the tail of the sunken airplane careening through the ocean, it can be assessed that the eatery is either partly or fully submerged. This is plausible because the tunnel which leads into the building is half-destroyed and, seeing how the Securis doors can be warped by the high pressures of the sea, the damage is most likely catastrophic.

In BioShock 2 the back of a billboard advertisement for Finley's Pub can be seen on building rooftops in one of the skyboxes. There appears to be a goose on the marquee.

A billboard for Finley's Eat-In Take-Out can also be seen when Delta arrives at the wide view of Rapture after leaving the Adonis Luxury Resort. 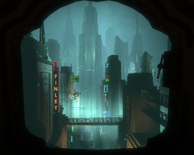 The company's marque seen from the bathysphere.

The advertisement for Finley's Eat-In Take-Out.