The Fireman is an enemy featured in BioShock Infinite. They are the first Heavy Hitter enemy Booker DeWitt fights across his journey in Columbia. Employed as shock troopers by both the Founders and the Vox Populi, they are encountered by the player several times in the game.

Firemen are trapped inside Iron Maiden-like devices that are constantly burning them for their wrongdoings in life. They use the Devil's Kiss Vigor in combat, allowing them to attack Booker with the fire that surrounds them.[1]

Firemen are surprisingly agile and will relentlessly attempt to close distance with their target, lobbing Vigor-infused fire bombs as their primary mode of attack. They are capable of utilizing Sky-Lines to increase their mobility and to reach otherwise inaccessible locations. In close quarters combat, they can project a powerful explosion of flame to burn nearby foes.

When critically wounded, Firemen will initiate a self-destruct mode, emitting a high-pitched whining noise as the flames engulfing their body intensify. They will use their final moments to charge at their target, attempting to catch them in an ensuing explosion.

Firemen are denizens of Columbia sentenced to constantly be set aflame as penance for the sins they have committed in life. The padded suits they wear are linked to an iron exoskeleton that serves to conduct heat from the boilers strapped to their backs. The boilers use a bottle of Devil's Kiss as a source of thermal energy, providing the Firemen with their ability to manipulate fire. Metallic masks with glowing slits conceal their faces. The exact appearance of Firemen underneath their suit is unknown, though the nature of their punishment implies that the suit helps keep them alive.

The first Fireman is encountered in Shady Lane, after Booker fights his way through several police officers. It is from this Fireman that Booker acquires the Vigor Devil's Kiss.

Though powerful in close-ranged combat, a lone Fireman can be easily defeated without taking any damage at all. Firemen are far more threatening when encountered with other groups of enemies, as their area-of-effect damage attacks and aggressive combat style can force players to abandon cover.

Ideally, Firemen should only be fought at a distance, as the slow travel time of their fire bombs makes them highly inaccurate at longer distances. Sections of their metal suit, such as the pieces on their limbs and back, will glow red with heat when priming an attack, making it even easier for the player to evade harm. When confronting a Fireman with group of enemies, it is advisable to focus on eliminating the Fireman first at range. Failing that, the player may also attempt to lure the Fireman away from the support of his allies.

When the Fireman initiates his suicide bomb, a timer will appear above him. When the timer appears, the player has two options. One option is to keep firing; although the Fireman is close to death, he is not dead yet. Fully depleting the Fireman's health will prematurely end his bomb attack, which can damage any unfortunate enemies caught in the blast radius. This option requires sufficient ammunition/Salts to accomplish. The second option is to retreat and wait out the Fireman's last five seconds. If the Fireman starts his run close to the player, the player must have five seconds' worth of sprinting distance to outrun the Fireman, otherwise, the bomb will detonate in the player's face.

A dead Fireman is found by Elizabeth in Burial at Sea - Episode 2, during her return to Columbia when she backtracks to the Factory Docks after retrieving a hair sample for Yi Suchong. This is the same Vox-aligned Fireman that forms part of the attack on Booker and Elizabeth in BioShock Infinite, when they are betrayed by Daisy Fitzroy. 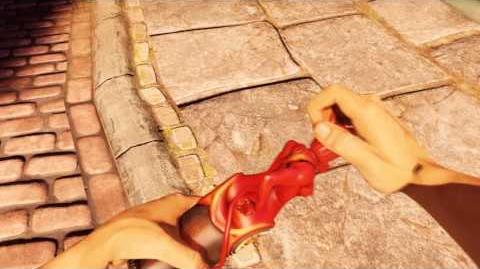 The first battle with the Fireman. 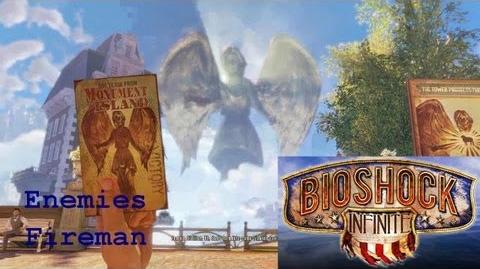 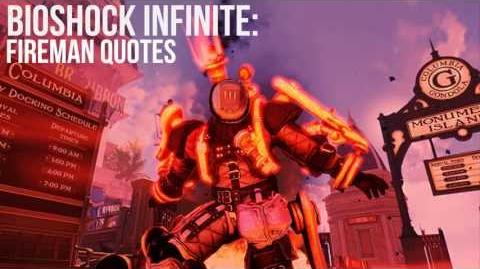 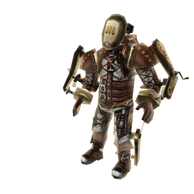 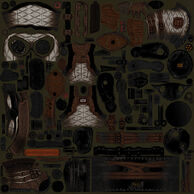 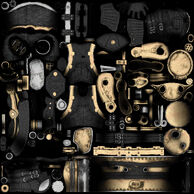 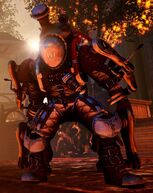 A Fireman loyal to Slate in the Boxer Rebellion exhibit.

A Fireman seen from behind.

Booker faces a Fireman in the Good Time Club.

Destruction in his path.

Using Shock Jockey against a Fireman.

A Fireman throwing a firebomb.

A Fireman in the Duke and Dimwit Theatre.