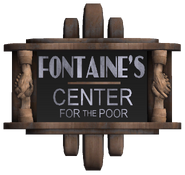 “Made Ryan good and mad when I started playing the charity angle. Fontaine's Home for the Poor… You don't have to build a city to make people worship you … just make the chumps believe they're worth a nickel.”
― Frank Fontaine[src]

Fontaine's Home for the Poor was one of Frank Fontaine's charity programs. It was used to gain the support of the poor citizens of Rapture, and to recruit them to Fontaine's own cause.

Frank Fontaine observed Sofia Lamb's charity programs, but was not impressed. He could see she was becoming very popular with the people of the poor districts through her free counseling sessions, and he realized there were great possibilities in charity. He created Fontaine's Home for the Poor and the Little Sister's Orphanage, not out of sympathy for his fellow men but as another of his grand confidence schemes.

Fontaine used his poor houses to gain support from destitute Rapturians, pretending to offer them relief from Andrew Ryan's harsh economic policies. In this way, he turned the citizens away from Ryan and set the stage for their revolt in the Rapture Civil War. As people flocked to the poor houses, they began to turn more rebellious, even holding public rallies against Ryan. One such demonstration outside the Hestia Chambers featured an orator announcing, "You think Ryan's gonna be there for ya when you're down n' out? No… Fontaine, Fontaine's the man with the helping hand!"

Once Fontaine had  poor people on his side he formed them into an army, and supplied them with as many Plasmids as they needed, all manufactured by his company, Fontaine Futuristics. After Fontaine faked his own death, the poor house became the central headquarters of his Atlas persona, as he organized revolutionary actions against Ryan.

One of the main poor houses was located at the Hestia Chambers in Apollo Square. The building was five stories high, plus a Boiler Room, all of which can be accessed by the player. The structure contained a central atrium which goes all the way up the five floors to the glass windowed ceiling, with stairs ascending around the rim. In many ways, the building resembled New York City tenements, with clotheslines draped between the tall, close windows of the adjacent floors. Each floor greatly resembled Artemis Suites: there was minimal, if any, decoration. Rows of bunk beds filled the dilapidated interior, with communal kitchen areas on some levels.

Retrieved from "https://bioshock.fandom.com/wiki/Fontaine%27s_Home_for_the_Poor?oldid=316410"
Community content is available under CC-BY-SA unless otherwise noted.