“What did they expect? You keep enough drugs stashed in this clinic to splice up a rhinoceros, of course every poor soul in the drop's gonna start beatin' down your door.”
― Tobias Riefers[src]

Fontaine Clinics is a business located in Town Square, Pauper's Drop. The business was owned by Frank Fontaine and, like many of his charitable assets, had a hidden agenda. Despite its run down state in 1968, the clinic remains extremely secure.

The center was open to customers from 8 AM to 4 PM. Besides providing medical care to the people of the Drop, the clinic also collected blood in exchange for cash, which secretly helped Fontaine Futuristics in retrieving ADAM for recycling. Certain Gene Tonics were also sold at the clinic, mainly to help cure diseases like Tuberculosis which were rife in the Drop. With such a large supply of ADAM and drugs, they had to take extreme security measures to prevent burglary by its desperate customers.[1] Being a product of Frank Fontaine, the clinic advertised Dandy Dental.

The only way for Subject Delta to get in to the King Pawn is to go through this clinic first. The doors are locked and an audio diary reveals that the code might be in the Fishbowl Diner.

After the doors unlock, Delta goes through the reception to get to the second floor. A television on the wall alerts the people in the area of his presence, telling them to "Shoot on Sight". To the left of the entrance is the door to Dr. Shyera's office, but it has been boarded up for some time. The counter has two flasks of medicine and behind it a First Aid Kit and a hack dart. Some bandages are on the drawer next to a small waiting area. The player will find one of the Little Sister Vents by the stairs to the second floor.

Walking towards the stairs will trigger a Splicer to kick a burning oil barrel towards the player. The second floor is a large waiting room with two doctor offices, one of which is boarded shut. A Security Camera guards the area, while a Health Station assist the player. Besides the furniture, there is not much left in this room, except for some Vitamins and Aspirin. The hole in the wall leads to The Hamilton, connected by a handmade bridge.

Dr. Tjan's office is the only accessible doctors office in the building. A deceased client lies on the surgical bed with blood splatter and money on the floor. A hole in the wall leads to King Pawn's roof, which is guarded by a Turret.

The Roof is only accessible from The Hamilton and a maintenance tunnel leading to King Pawn. The Atlantic Express' railway goes straight above the building along a water tower.

At the time Delta gets on the roof, two Splicers are sacrificing one of there own to a Little Sister by the heavily decorated Little Sister vent shrine. The shrine reads: "We Will Meet Again." When the Splicers attack after noticing Delta, it seems that the sacrificed Splicer was just pretending to be dead and attacks Delta when he comes close. Security was set up on the roof as well with another security camera, now watching over a gun-downed ADAM Corpse. There's a Gene Bank and an oil leak with several red barrels and gas tanks, which will come in handy if the player chooses to gather ADAM from here.

On the second floor. 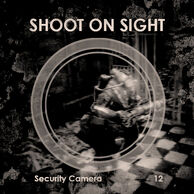 Security photo of Delta seen in the reception. 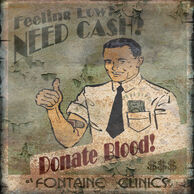 Advertisement for the Clinics.
Add an image to this gallery

Retrieved from "https://bioshock.fandom.com/wiki/Fontaine_Clinics?oldid=318017"
Community content is available under CC-BY-SA unless otherwise noted.