“This facility belongs to the city now — to Ryan Industries… at least until the rioting subsides. While it is unfortunate that such measures had to be taken… I must admit, it is gratifying to see this building condemned.”
― Andrew Ryan[src]

Fontaine Futuristics is the seventh level in BioShock 2. It was the corporate headquarters and research labs of Fontaine Futuristics which produced Plasmids, Big Daddies, and other wondrous technologies for Rapture. A grand atrium anchors the corporate offices and Plasmid demonstration halls. An adjacent site contains the hidden labs where many of Rapture's advances in genetic and robotic technology were developed.

Fontaine Futuristics was established as a laboratory and business headquarters for Frank Fontaine's technological ventures in Rapture. His business once employed some of the brightest minds in Rapture, including doctors Brigid Tenenbaum, Yi Suchong, and Gilbert Alexander. After Frank Fontaine's "death" months prior to the 1958 New Year's Eve Riots, Andrew Ryan had the City take control of Fontaine Futuristics and placed under control of Ryan Industries. Soon afterwards, the ADAM technology labs were converted to design and create the first Big Daddy and Little Sister pairs. Here the Big Daddies of the Alpha Series were conceived and tested through the joint effort of Dr. Suchong and Gilbert Alexander. Work resumed until the successful bonding of Subject Delta to his Little Sister, Eleanor. Ryan then condemned the facility to put an end to Fontaine's legacy. Ryan Industries took over its many subdivisions at other locations throughout Rapture, such as the Genetic Research Dept. in Point Prometheus. Even after being condemned, Gil Alexander and several other scientists continued to work in the hidden research facility built behind the building.

After Ryan's death and the closure of the Civil War, Alexander assumed control of the entire facility, restructuring its security systems in the process to his own uses. Per order of Sofia Lamb, he also restarted the Protector Program, which had stopped when Rapture's society broke down, and in response to the failing supply of ADAM in the city. While Gil worked on the latest Big Daddy model, Sofia Lamb used the building herself to experiment with ADAM's uses for preserving memories and skills in DNA. Gil Alexander was the main candidate for these tests, but when the project left him horribly deformed and insane the building was abandoned by Lamb. The structure fell into a state of disrepair while under the control of "Alex the Great".

Fontaine Futuristics was made up of four buildings: an Atlantic Express train station on the North-East line of the transportation network, the main business headquarters and customer demonstration venues, the hidden ADAM laboratories, and a small wrecked outpost which contained a secret elevator to Persephone.

The main headquarters contained the marketing division of Fontaine Futuristics, as well as several tourist attractions to please visiting patrons. This included a small simulated laboratory room and a grand Plasmid Showroom to display the power of Plasmids. Behind the main headquarters was a building which housed the true ADAM laboratories where research and production of ADAM and Plasmids took place. These hidden labs contained many holding cells for Plasmid test subjects, who had been obtained from the Persephone Penal Colony.

At the end of BioShock 2, the headquarters are destroyed due to the collapse of Persephone into the ocean trench, seemingly dragging the building down with it. Delta can see the building slowly collapse as Sinclair's lifeboat rises from behind it.

Subject Delta and Augustus Sinclair travel to Fontaine Futuristics in search of Eleanor Lamb. They need to obtain a genetic key from Gilbert Alexander, which will unlock the hidden passage to Sofia Lamb's stronghold, Persephone, where she is holding her daughter. Facing them is Gil Alexander, who has become "Alex the Great", insane due to ADAM experiments performed upon him by Sofia Lamb. Before losing his sanity, he left a trail of recordings to instruct following strangers on how to destroy him.

"Alex the Great" contacts Delta through a highly modified and invulnerable Security Bot, which mounts a television screen which shows his manic stare, a speaker letting him talk to his victims, and a Tesla-coil device with which he sabotages devices, electrocutes his "employees", and carves messages into the walls. Alex controls the Bot through four hacked Bot Shutdown Panels, which Subject Delta must find and destroy in order to loosen the scientist's control over the facility. Delta can then access a place which holds the switch to the secret development labs where "Alex the Great" has his lair. Gil, a heavily mutated former scientist, calls upon Splicers and mad Alpha Series Big Daddies to attack Delta, including every time Delta destroys a relay panel.

The Atlantic Express Train Station of Fontaine Futuristics had a building all to itself. The station has a lobby with a large window looking across to the main Fontaine building. A tunnel had connected the lobby to the Fontaine Building, but sometime after the war it collapsed. To the left of the lobby is an airlock built to provide access to maintenance divers and Big Daddies, containing diving equipment, lockers, and an airlock system.

The central building of the Fontaine headquarters was very tall and contained offices and departments for most of the administration for the company. The side of the building held an airlock system for Big Daddies and divers. The Lobby was located in the front of the building and was connected to the collapsed tunnel from the Train Station Lobby. The Lobby contained a small lounge for visitors, including a large fountain with a globe statue. Up the central stairs of the Lobby is a secured, barred door with a bio-scan camera confirming employee authorization and sanity levels among other things. Past the bio-scan doors is the reception desk, and beyond is a security office outside the main hallway of the Fontaine Futuristics headquarters.

The central area of the Fontaine Futuristics building contained a large staircase, and was the main hub for all sections of the building. To the left of the entryway were the restrooms and a hallway leading to maintenance diver airlocks. The fake ADAM show laboratories were located directly across from the entryway.

To the right were the Plasmid Showroom, a theatre that demonstrated the power of Plasmids for investors and curious customers. It contained various props to amuse visitors, including the Incinerate! prop which released gouts of flame when touched, the Electro Bolt prop which generated a static field, and the Telekinesis prop which would cause anything near it to fly into the air.

The second floor contained two areas of offices. Frank Fontaine's personal office was located directly above the reception area. Guarded by a Turret and requiring entry by secretary, Frank Fontaine's office was very secure. The interior was spacious and richly adorned with paintings and a giant bear statue. The left side of the office is adorned by a curtain hiding a wall of safes, smuggling evidence, and a personal diary of Fontaine's plan to unveil his new persona as Atlas. These prizes could only be found by turning a Hog Head Trophy set into the wall. Since the war, many of the portraits in the office have been defaced with scrawled insults such as WHORE! and LIAR!

Next to Fontaine's office were the main offices of the Marketing Department. The central room of the marketing division was a meeting room for employees to discuss planned advertising campaigns for the Plasmids. To the right of the meeting room was the office of the head of the Marketing Department, and to the left were the offices of rank and file employees.

Behind the main Fontaine Futuristics building was a hidden facility where the real ADAM research and development took place. Fontaine's Plasmid Research and Development contained laboratories and cells to hold the test subjects, as well as the apparatus to bond a Protector Big Daddy to a Little Sister. In the Atrium of the facility was a large control panel that controlled the electricity and power of the Labs. Also, a large tank for studying sea-life was kept in the middle of the atrium. By the time Subject Delta arrives during BioShock 2, this tank is used as a hideout by the heavily mutated Gilbert Alexander.

This area has been overgrown by ADAM-infused plants that sprout red "Hypnosis Polyp" balls as fruit, which resemble the orb Subject Delta holds when the Hypnosis Plasmid is equipped. Enemies struck by these bursting polyps are hypnotized or enraged, just like the effect of the Plasmid. 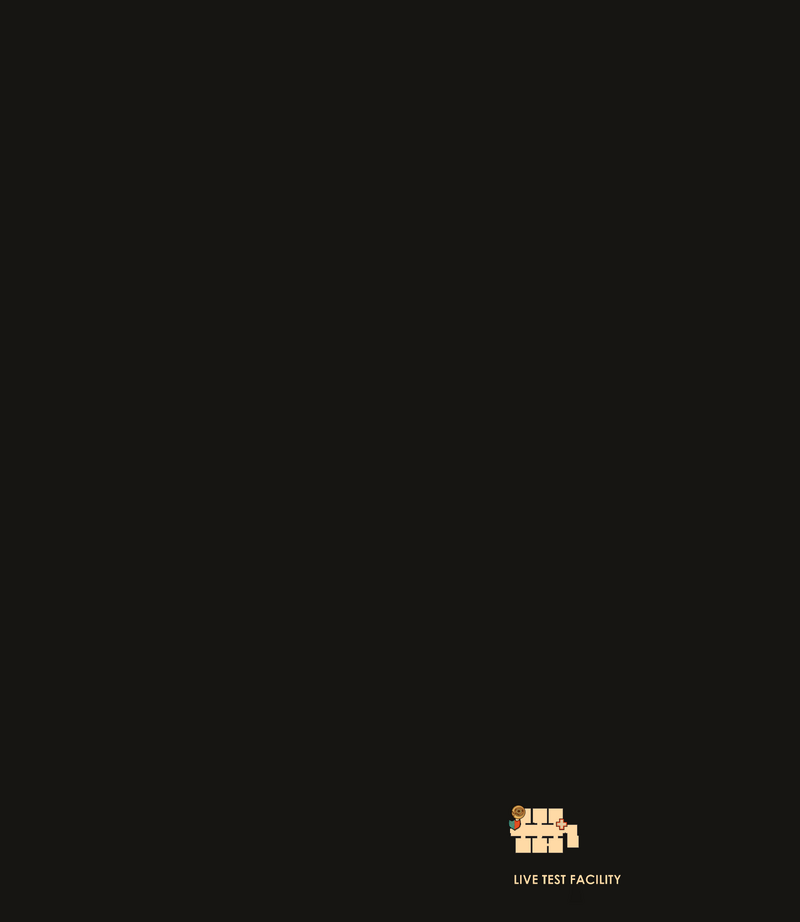 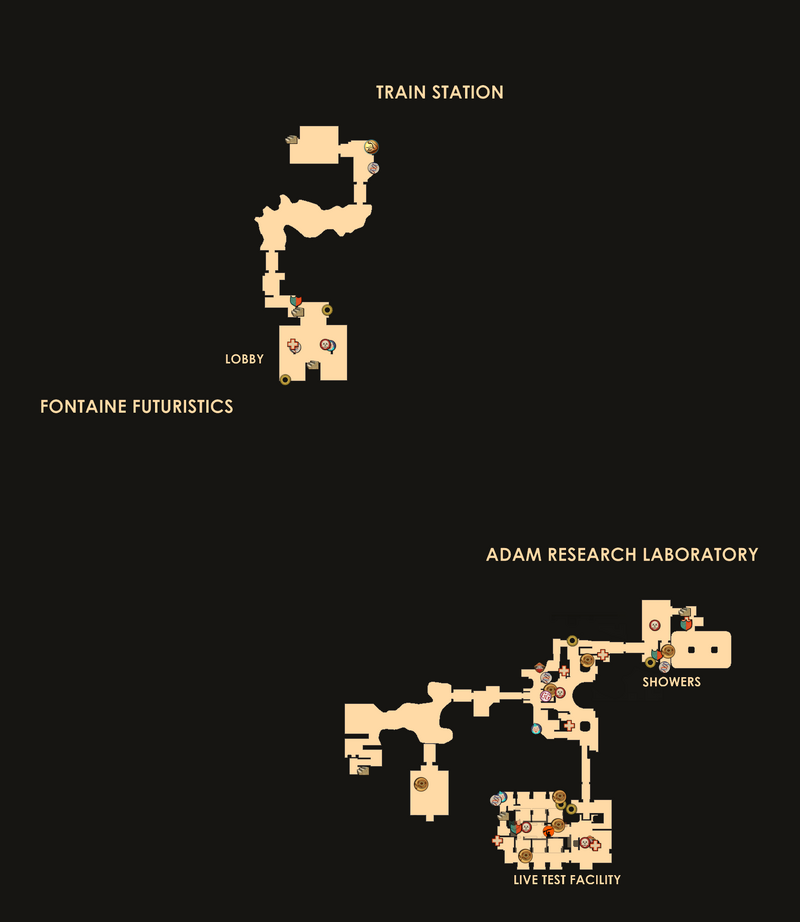 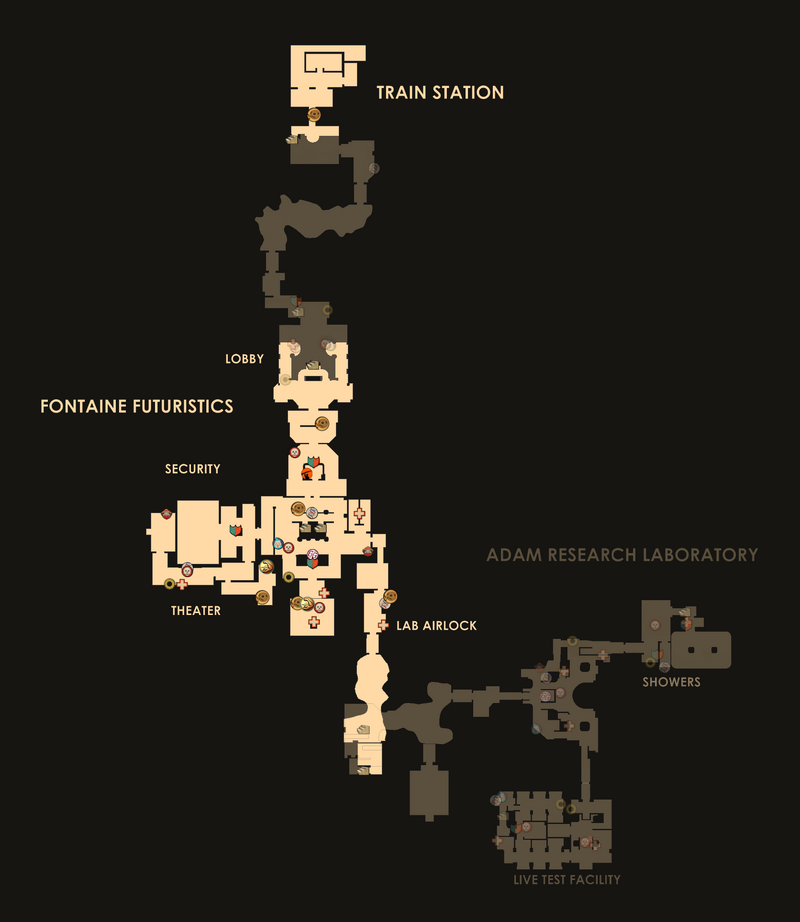 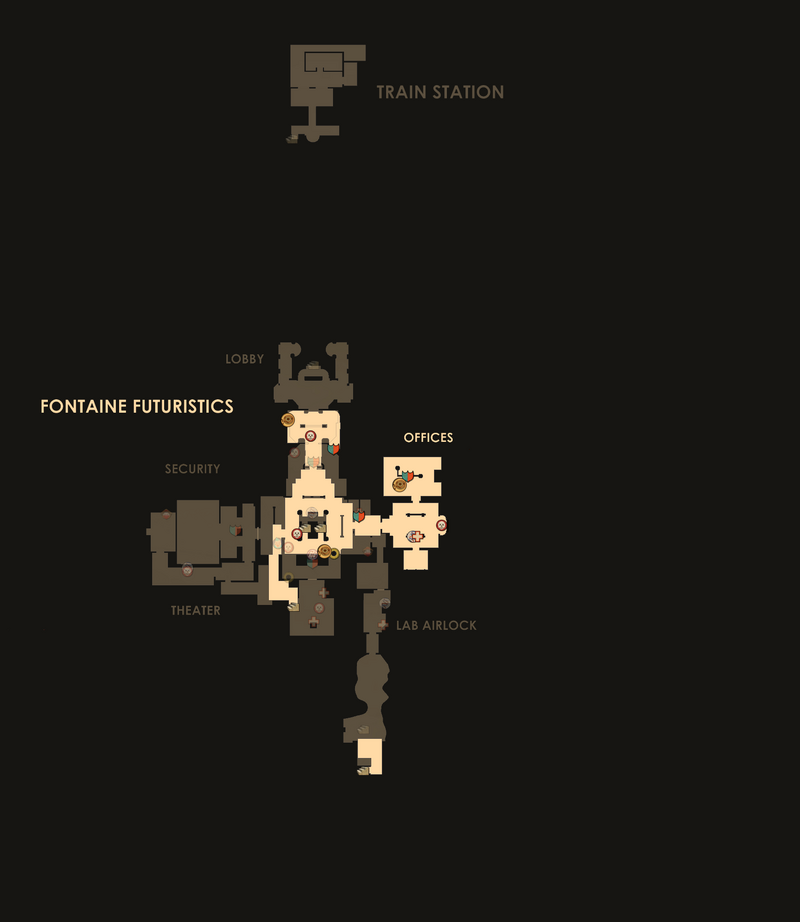 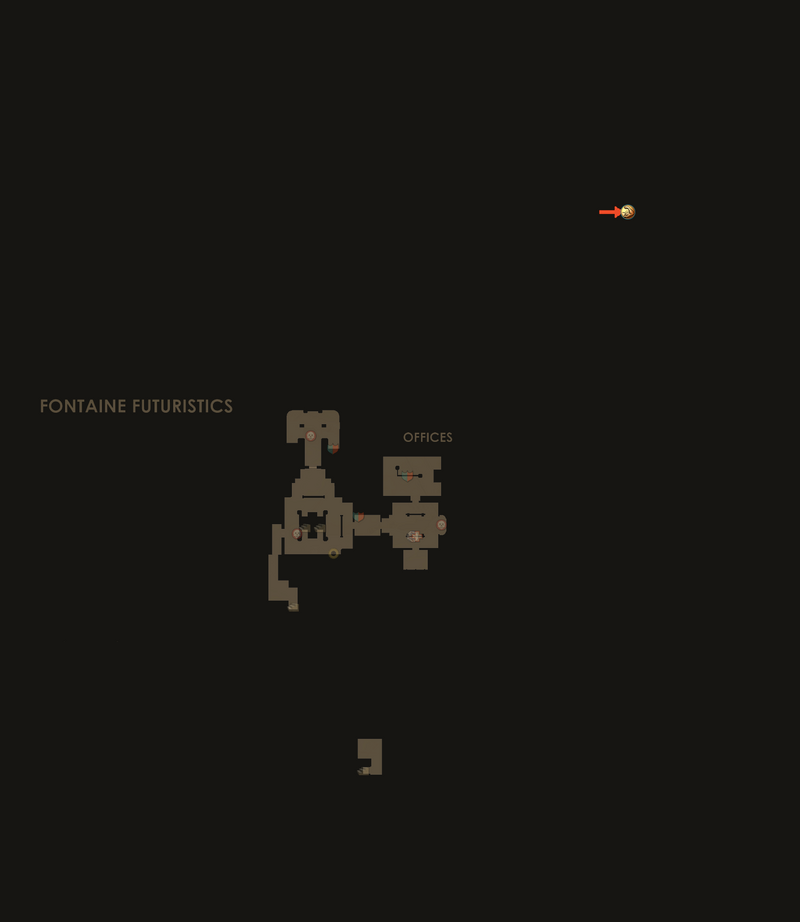 *The red arrow on the map marks the location of the hidden room with the Vending Expert 2 tonic. 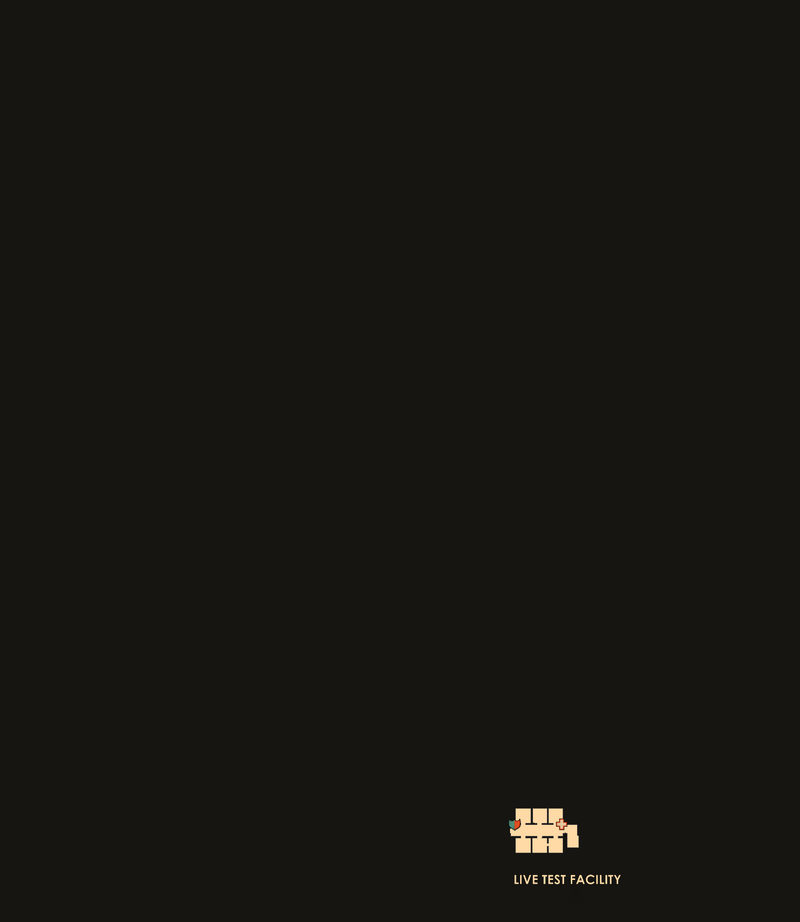 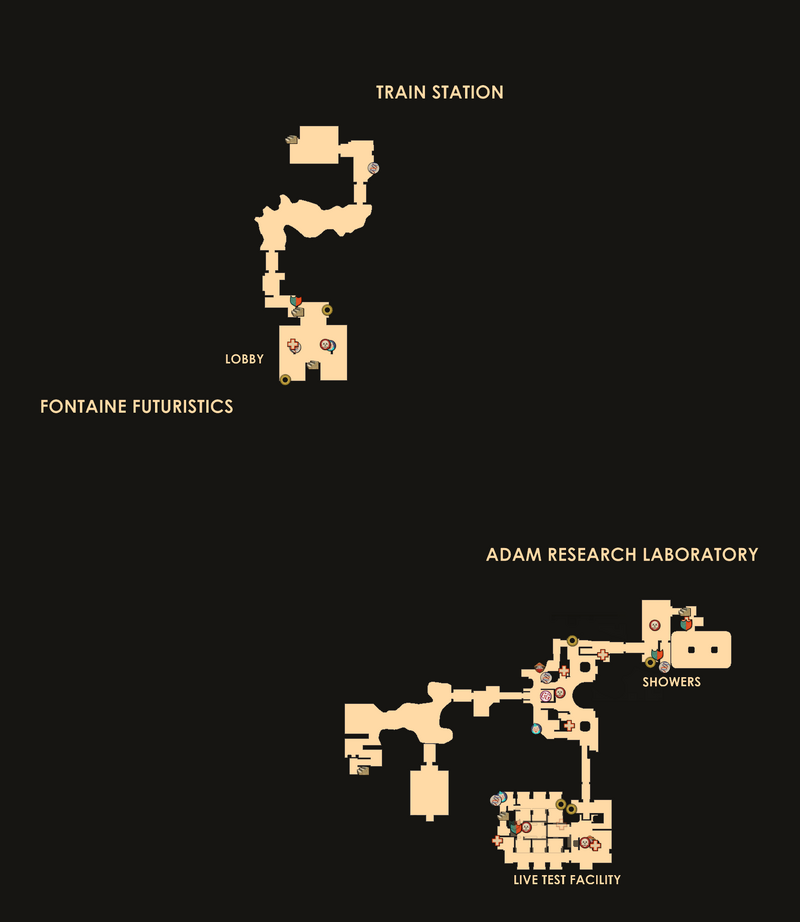 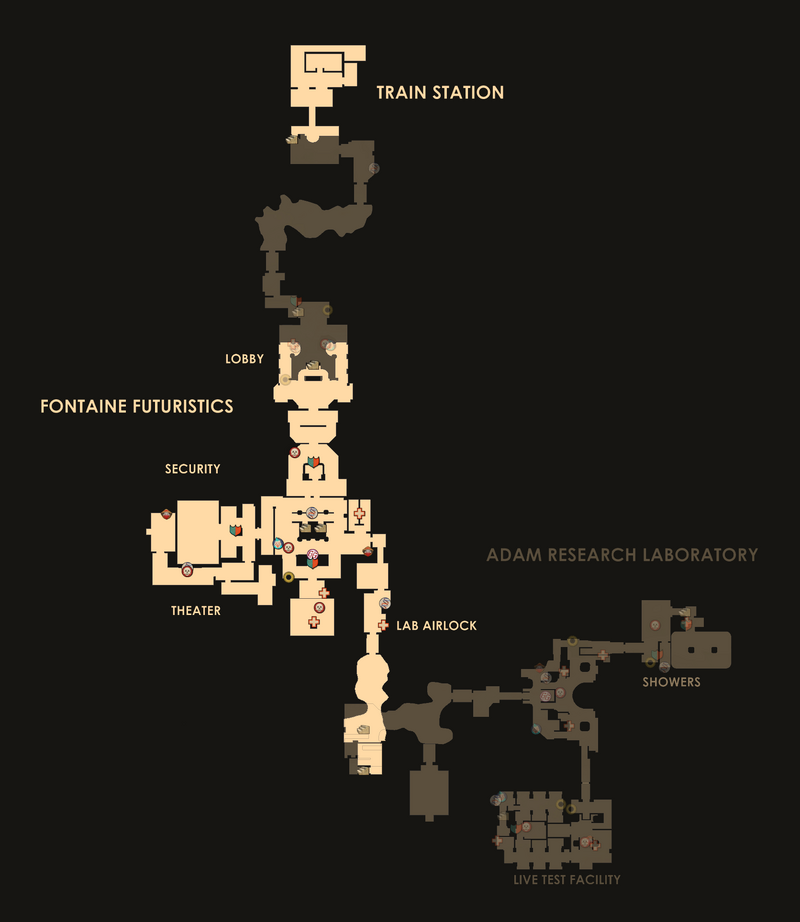 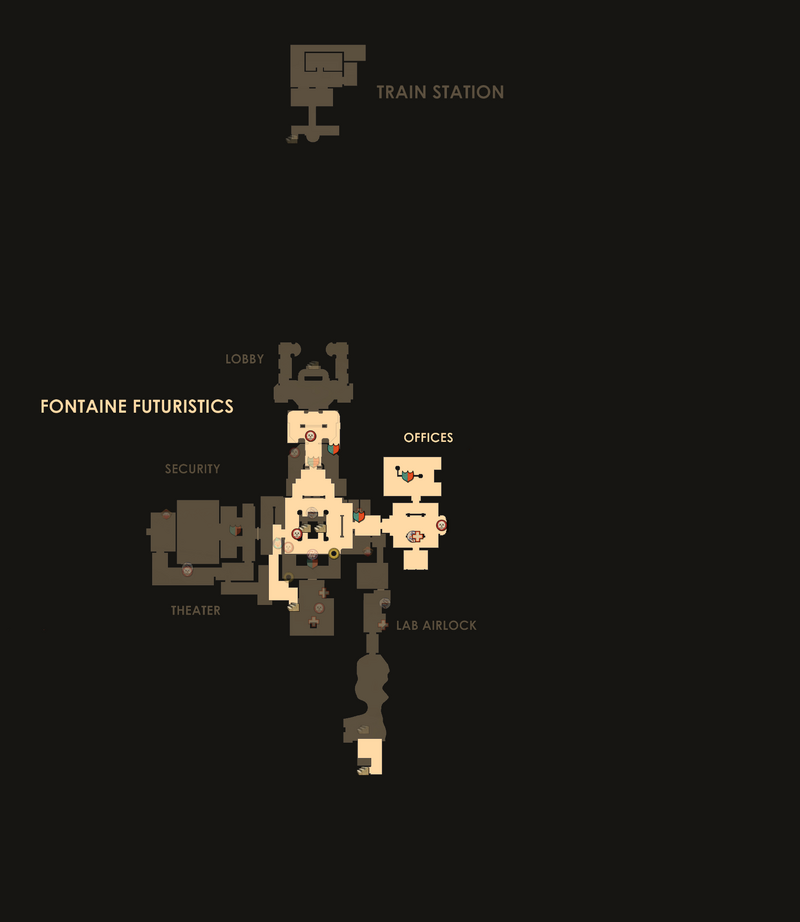 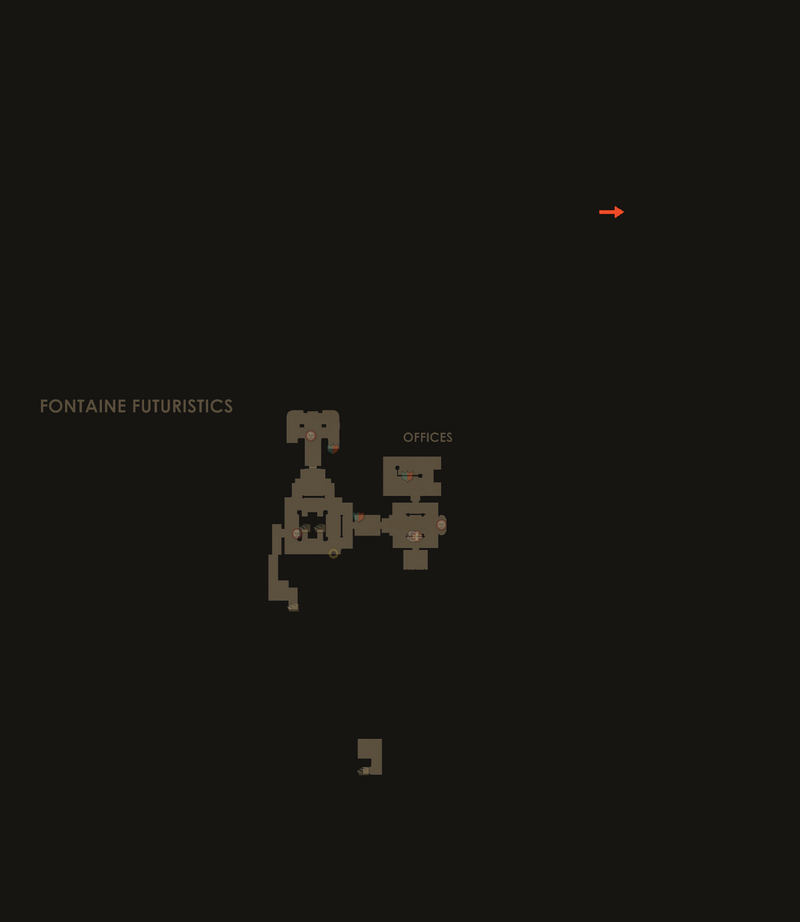 *The red arrow on the map marks the location of the hidden room with the Vending Expert 2 tonic.

There are a total of 17 Audio Diaries:

Note: Once gone through the flood door there is no return!

The front of the headquarters' building can be seen twice in the Need to Know Theater production "Taking the Taint Out of Fontaine". The company's logo is also seen over various footage of the products at Fontaine's Department Store back when it was still in business.

Concept art for the lobby stairway. 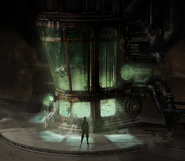 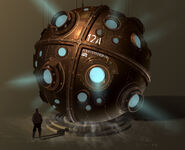 Concept art of Alexander's tank in a sphere shape.

An early version of the Fontiane Futuristics' Lobby. 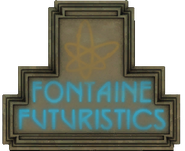 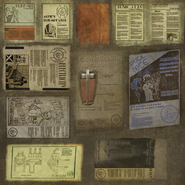 One of the portraits in Fontaine's office.

Another defaced portrait in the office.

A Security Bot controlled by "Alex the Great" attacks a Splicer.

The entrance to Fontaine's office.

The large stairway on the First Floor.

Looking back at Train Station Lobby

The broken entrance tunnel to the main Fontaine Futuristics building.

Secret Ocean entrance at the rear of the main Fontaine Futuristics building.

One of the "Fired" victims.

A cold end to an employee.

The death of Gilbert "Alex The Great" Alexander.