“Being the best at what you do can really take it out on you. So unwind! At Fort Frolic: gamble, shop, take in a show or meet a new friend, all at Fort Frolic. Fort Frolic: where the best and brightest celebrate success.”
― PA Announcements[src]

Fort Frolic is the seventh level of BioShock. Trapped by the egocentric, demented artist Sander Cohen and cut off from both Atlas and Ryan, Jack will have to track down and kill Cohen's former disciples to be allowed to leave this district and finally reach Hephaestus.

Every society, even one at the bottom of the Atlantic Ocean, needs a place to unwind — a place where adults can indulge themselves with a couple of drinks, go on a spending spree with a day of shopping, take in a show, or try their luck in a casino. In Rapture, one such place was Fort Frolic. Decorated in neon lights, torchère columns, and checkerboard tiles, Fort Frolic was a glamorous setting that featured everything from the fine arts, such as music, film, and theater, to the more salacious distractions, such as strip clubs and gambling. It was also a shopping destination, featured many boutiques selling goods from the most luxurious clothing to the finest tobacco and liquor.

The Fort was run by Sander Cohen, an artist, director, gallery owner, and "a real lunatic, dyed-in-the-wool psychopath."[1] As one of Rapture's most celebrated artists, he used the district as his personal platform. He presented a number of his works in Cohen's Collection, or on stage in the Fleet Hall. Every 5th of November a large celebration was held to commemorate the founding of Rapture.[2]

In 1959, during the Rapture Civil War, Cohen closed Fort Frolic to the public, resulting in the closure of the theaters,[3] and artists like Suresh Sheti[4] and Mlle Blanche de Glace[5] lost their jobs. However, Cohen promised the people of Rapture one "Final Frolic".[3] What the unfortunate citizens didn't realize however, was that their time in the Frolic would become a permanent residence. Cohen trapped many people in the district when he closed it off to the public, using them for his twisted works of art.

“The Artist Should Not Fear The Censor”
― Banner[src] 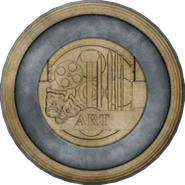 Just as in Rapture's prime, Sander Cohen still holds power over Fort Frolic. Scattered throughout the Fort are examples of his artwork: Fort Frolic's patrons coated in plaster and posed in various positions to form real human statues. Jack experiences his control first hand when the mad artist jams the radio, locks off the bathysphere, and sends a small wave of Splicers to test Jack's potential. Impressed with what he sees, Cohen unlocks the entrance to the Fort and invites Jack in.

This area served as the main entrance into the Frolic and featured two Bathysphere docks. The first one Jack arrives in appears to have been for emergency access. The entrance hall contained a Vita-Chamber, Gene Bank and U-Invent, along with an Apothecary store which is now closed.

Fort Frolic's Rapture Metro station is truly symbolic of the districts artistic style. The station is bathed in purple light, and its walls are decorated with a large mosaic and red drapery. Two of Cohen's "statues" stand in awe of the Bathysphere, while four more dance on poles hung from the ceiling.

Adjacent to the Rapture Metro, the atrium serves as the hub of Fort Frolic. Still advertising the lost pleasures of Rapture, it is now a hollow shell of its former glory. As Jack enters the room, the dim space comes alive: the lights and neon signs switch on, a dark figure dashes by one of the southeast doorways, and Cohen welcomes Jack in grand fashion. Lost and long forgotten memories of what the best of Rapture used to be like linger at every turn. Many of the entrances to the rest of Fort Frolic are either closed or destroyed. It is here that Jack must build Cohen's distorted "masterpiece": the Quadtych. The Atrium is divided into two sections: the Lower Atrium and the Upper Atrium.

The lower atrium is only a shadow of what it once was with most of the space shut-off or inaccessible to Jack. Cohen's Muse Box lies beside the stairs in its glass bell jar. The other six places in the Lower Atrium are blocked off with their signs destroyed, save for an inaccessible strip club called The Seahorse.

Upstairs lies the upper atrium. There are many places to see here: first, and most notable is the Fleet Hall, where the citizens of Rapture could enjoy theatrical and musical arts. Inside, it offered a chance to catch a drink of Ryan's Club Ale or a bite of a chocolate-creme cake before the show started. Since Rapture's fall, Fleet Hall has remained in relatively good shape, but now contains plaster-covered Splicer statues frozen in silent expressions of clapping and cheering. The only other accessible place in the upper level of the Atrium is Cohen's Collection. Once a place where the wealthy could view and purchase Sander Cohen's art, all that remains are empty canvases and walls that have been burned to a crisp. Inside, all Jack will find are several safes and a plaster-covered table with a plaster family sitting around it.

When open to the public, Fort Frolic was home to many different stores. However, much of the mall area has been closed off or shuttered. Only the southernmost portion of the area is easily accessible. Just off the Atrium are two bathrooms, and in the men's room one can see more of Sander Cohen's "Human art." The Cocktail Lounge once served as a place where the night-clubbers of Rapture could have a drink. Nearby sat a series of opulent, high end shops: Sophia Salon High Fashion, the Gardner Delux Modern and the Le Marquis D'Epoque. Only the first and last of these are accessible to Jack.

The Sophia Salon's last business, prior to the collapse of Rapture, held a 50% off sale. Inside the Le Marquis D'Epoque liqueur and cigar shop, many of the shelves on the upper floor are empty; the remnants of the stock are scattered about the floor. Downstairs are a couple of vending machines, boxes of cigars (most still on the shelves) and a dead man with his blood around him (possibly the corpse of Albert Milonakis.) 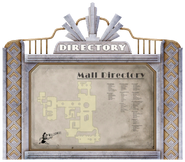 Poseidon Plaza remains largely intact, mainly suffering only cosmetic damage, such as leaks and holes in the walls. Behind these walls, shadowy figures dart about in the narrow recesses. Although the space is in relatively good shape, the same can't be said for most of the businesses here.

The first of many once fine establishments are Sir Prize: Games of Chance. Sir Prize was just one of the many gambling and drinking spots in Fort Frolic, but is now in disarray. It is not empty, however, as when Jack arrives a trio of Splicers are engaged in a barroom brawl. Sinclair Spirits was, at one point, amongst the best places to sample and drink bottles of the finest wines, liqueurs, and beers in Rapture. However, it is now a wreck, the walls and pillars eroding away by the seawater leaking in from every direction.

Robertson's Tobaccoria, next to Eve's Garden, once sold the finest and most luxurious tobacco products in Rapture. Although this shop is not in danger of being flooded or suddenly collapsing, tobacco has become much less popular in Rapture, replaced by addictive ADAM.

Eve's Garden was a well known gentleman's club in Rapture, featuring Jasmine Jolene – "Andrew Ryan's Favorite Gal!" Here, the men and women of Rapture could unwind with a couple of drinks in the swanky bar and find some 'company'. Now the old haunt is a ghost of its former self.

Upstairs is the most destroyed part of the plaza, with walls coming away and the glass ceiling giving way under the pressure of the sea. There are only four accessible places, two of which are hidden from the ground floor: Rapture Records and the Pharaoh's Fortune Casino. Rapture Records is the most ruined part of Poseidon Plaza. Once a place where shoppers could go to stock up their record players and jukeboxes, it is now completely razed. Walls stripped bare, fires still burning above the metal ceiling, burnt furniture and bodies chucked around, and water dripping through the sodden ceiling.

In contrast, the Pharaoh's Fortune Casino still stands tall. This gambler's haven was and still is the perfect place to get drunk (a 2 drink minimum) and put one's luck to the test. Jack can still put the many slot machines to the test and win (or lose) some cash. 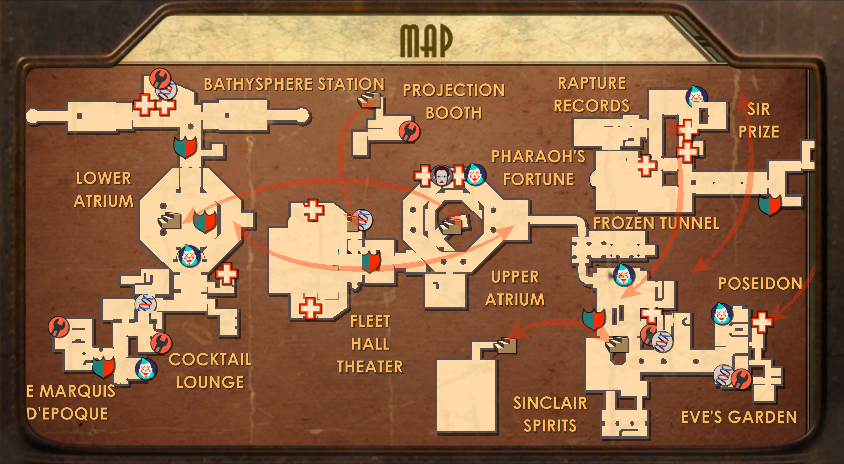 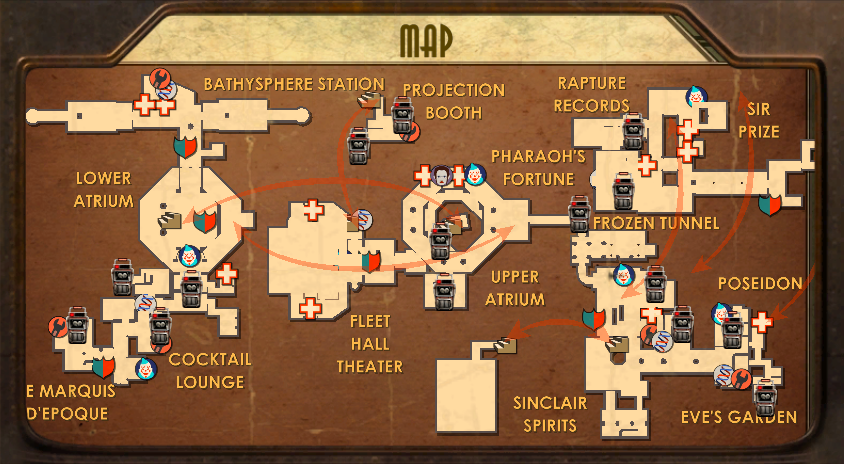 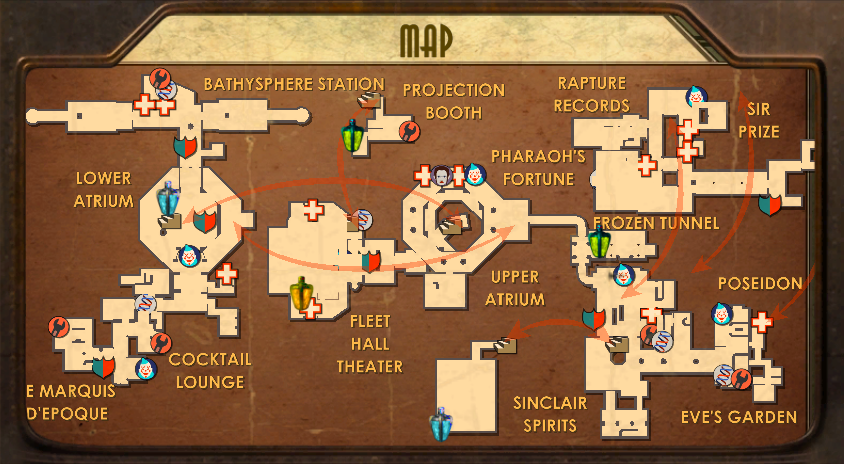 Although Fort Frolic is never visited in BioShock 2, the Fort's marquee can be seen on a destroyed building when Subject Delta gets his first panoramic view of the city. A number of signs for businesses within Fort Frolic can also be seen advertised on adjoining buildings.

Fort Frolic is referenced in both episodes of the BioShock Infinite downloadable content Burial at Sea. An advertisement for Fort Frolic can be heard through the Public Address Announcement in Episode One. It is also learned that a business called the Defense Pavilion operated in Fort Frolic.

In Episode Two, it's learned that Felix Molloy was given an order by Atlas to choose a location to attack when/if they escaped their prison in Fontaine's Department Store. He believed that Fort Frolic would be a prime target if they managed to escape by the 5th of November as the Fort played host to an event celebrating the founding of Rapture and would be packed with revelers. Pharaoh's Fortune Casino would have been one of the main targets.

At the end of the episode, Fort Frolic's "courier" marquee can be seen from the window in the hall where Elizabeth rendezvouses with Atlas.

Concept art for the mosaic at the Fort Frolic Rapture Metro Station, by Scott Sinclair.

The rejected concept art for Fort Frolic's condition in 1968, as part of the entrance to Dionysus Park in BioShock 2.

Another variation of the flooded mall.

Early version of the Fleet Hall.

Early version of the Fleet Hall.

A very early version of the atrium.

An early version of the atrium.

An enraged Elite Bouncer in an early version of the Pharaoh's Fortune Casino.

A spliced-up showgirl welcomes you to the Frolic.

Screaming won't release you from this "Final Frolic".

Cohen leaves his art legacy where he pleases.

A gatherer along her protector near the Quadtych.

Shopping is no longer a value in the mall, but survival.

A female Spider Splicer at the gates of Fort Frolic.

"Statues" in the Woman's Rest Room.

Fort Frolic's Metro Station. Notice that the curtains are less detailed in the Remastered version.