“We dare defend our homeland.”
― Fraternal Order of the Raven's Motto

The Fraternal Order of the Raven is a Founders-affiliated organization in Columbia, concerned with maintaining the city's "racial purity." The Order was founded by a citizen known only as the First Zealot. Worshipers of the deceased Lady Comstock, they honor the symbols of the sword, the raven, and the coffin in her name[1] (as contrasted with the sword, the key and the scroll, the holy symbols of Columbia). Their emblem is that of a stylized eye with five swords crossing behind it, and a banner which reads incorrectly in Latin, "Audemus Patria Nostra Defendere", which was probably intended to mean: "We dare to defend our homeland". Properly rendered, it would be: "Audemus Patriam Nostram Defendere".

The group glorifies John Wilkes Booth as a saint for assassinating Abraham Lincoln, "the Emancipator" or "the Apostate" (a term Zachary Hale Comstock often uses in reference to the same), whom they view as wicked for abolishing slavery. Members of the Order cloak themselves in hoods and robes reminiscent of the real-life Ku Klux Klan, with lesser members wearing indigo and leaders wearing black. The Order believes that Columbia's racist ideals make it and its citizens superior to the rest of the world, and they seek to enforce a doctrine of racial purity.

The most prominent members of the Order are the Zealots: fearsome, sword-carrying, coffin-bearing enemies whose powers mirror that of the Order's namesake. They count among the elite forces of the Founders, and are occasionally sent to kill Booker DeWitt. 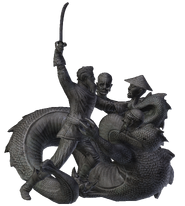 Booker discovers the Order's headquarters in Comstock Center on his journey to Monument Island. The courtyard has a statue of Comstock fighting the "Serpent of Nations", depicted as a hydra-like creature with gross caricatures of a Jewish, Black, and Asian man for its three heads. The building's interior is squalid, with debris littering the floor, lights dim and continually flickering, and raven guano scattered throughout. Platters of rotten food are ubiquitous, especially in the dining hall, and attract many flies and ravens. There is also a statue of John Wilkes Booth in the foyer, a lounge, and bar which contains a painting of Booth, in golden glow, assassinating a Devil-horned Lincoln at Ford's Theater, a reading room, and a large ceremony hall.

In the ceremony hall is a mural of George Washington holding the Liberty Bell in one hand and the Ten Commandments in the other, standing above racist caricatures of people of different ethnicities. While traversing the building, Booker clashes with several Order members when he happens upon their meeting.

After taking them out, Booker takes the elevator to the Top Floor. In the circular room is a round table for meetings, with a projector displaying a phrenological study of Comstock. Behind a bookcase is a hidden storage area with a dungeon cell as well as a Gear in a display case.

When Booker opens up the chained door, he witnesses a prisoner getting executed by murderous black birds, and sees the leader, a Crow, walk away and vanish. Breaking the chain, he walks into an indoor garden where victims are kept in golden cages hanging from trees. Suddenly, the black-robed Zealot appears again and starts attacking Booker, sword drawn and all. After the casket-carrying Zealot falls, Booker acquires the Murder of Crows Vigor.[2] Upon exiting the building into the sunshine, the Gondola station to the Monument Island Gateway is just ahead. 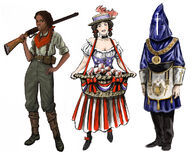 Member of Order (right) in concept art by Robb Waters.

The Crow, wearing a similar hooded attire to the Fraternal Order of the Raven.

Fraternal Order of the Raven - meeting.

"And today is the day we celebrate the secession."

Member of the Fraternal Order of the Raven in combat.

The round table on the top floor.

Hood of a member of the Fraternal Order of the Raven (Emporia, near scalp board).
Add an image to this gallery

Art and images in the Fraternal OrderEdit

The assassination of Lincoln viewed in a very positive light.

Mural of George Washington from behind the altar.

Film images from the Fraternal Order's phrenological study of Father Comstock's head, and comparing it to those of Lakota people.
Add an image to this gallery

Retrieved from "https://bioshock.fandom.com/wiki/Fraternal_Order_of_the_Raven?oldid=317984"
Community content is available under CC-BY-SA unless otherwise noted.