“Nobody gets even a sip unless I say so! You got it? Anyone who comes near that bottle without permission is a DEAD MAN!!!”
― Frosty Splicer[src]

Frosty Splicers are special Splicers encountered in the BioShock Infinite downloadable content Burial at Sea. These enemies have consumed a massive amount of the Old Man Winter Plasmid.

When Ryan Security started to come down on Fontaine, he distributed the Old Man Winter Plasmid to some of his more expendable cohorts. The Plasmid caused more severe mutations in its users than one would expect from ordinary Plasmid abuse.

The Frosty's most notable characteristic is their frigid appearance: they have pale, discolored blue skin, glowing eyes, and large, crystalline icicles sprouting from their arms, backs, knees, and heads. In addition, they possess a long, tousled "Santa Claus" style beard. Personality wise, the Frosty is a steely paranoiac who is deeply resentful of Andrew Ryan and remains loyal to Frank Fontaine. He frequently speaks to an imagined cohort, named Cara.

Frosty Splicers can make ice bridges from water rushing out of burst pipes. They are also seen battling with other Splicers with the ice balls they throw.

First encountered in Jack Frost's Village, Frosty Splicers employ a hit-and-run method of attack. If they spot the player, they will hurl five ice balls in multiple directions and later will dash to the nearest hiding spot. They are very aggressive and won't back down easily.

Weapons with a large amount of stopping power, such as the Shotgun, are best for taking down Frosties. Any upgrades for these weapons are also recommended. The Radar Range is also highly effective, as it will heat up and detonate them.

The only known identity of a Frosty Splicer is Ray Lardner. He was chosen, among his employees, by Frank Fontaine to protect his property when Andrew Ryan's forces attacked and was given the Old Man Winter Plasmid. He soon noted the side effects and soon became a Frosty Splicer in the department store prison.[1] He is the first Frosty Splicer the player encounters in the game.[2]

The Frosty Splicers will appear in this episode after the player leaves the Silver Fin Restaurant. They act as any other Splicer, until provoked into combat, wandering in usually larger parts of the Housewares department. 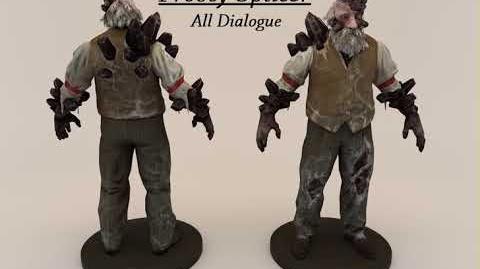 The model for the Frosty Splicer. (As old model of Shock Jockey Junkie)

The Frosty in his natural habitat.

A Frosty taking a nap.

The Frosty in battle.