Gear is the passive upgrade system in BioShock Infinite. Gear is equipped to specific parts of the body, namely the head, torso, legs, and feet. Gear can be changed at any time and allows the player to tailor the Gear load out to the specific situation. Booker can usually find Gear in gift wrapped packages on numerous locations throughout the game (usually behind locked doors and discreet locations). The Gear one obtains at every drop is randomized upon activation, meaning that reloading from a checkpoint and picking a Gear package up again will not yield the same item (except in certain cases, see below). Some drops appear to only give Gear for one slot, such as the random drop for the Fraternal Order of the Raven, which only seems to give pants. In the main game, there are 41 different Gear items, though in a normal playthrough the player will not be able to obtain them all. Purchasing the Premium or Songbird Edition adds three more pieces of Gear (Betrayer, Bull Rush and Extra! Extra!), completing the Industrial Revolution online game yields three more (Fleet Feet, Handyman Nemesis and Sugar Rush) and purchasing the Season Pass grants another four Gear items (Ammo Advantage, Eagle Strike, Electric Punch and Ghost Soldier), bringing up the total to a possible 51. The same Gear included in the Premium or Songbird Editions are part of the Columbia's Finest DLC.

Hat items specialize mainly in transfusing Vigor effects into melee attacks, giving them a chance to burn, shock or even possess enemies, though there are many other effects included, such as granting the player better survivability in protracted battles by making them less vulnerable, especially when it comes to smaller aspects such as reload speed, evasion of mechanical enemies, and more.

Shirt items generally improve the player's effectiveness in the midst of combat, allowing them to thrive even when overwhelmed. Certain shirts even let the player release elemental bursts around them when struck, igniting or shocking nearby enemies. Other aspects include but are not limited to more melee damage, movement speed bonuses, and increased yield of ammunition.

Pants items are particularly useful at getting the player out of difficult situations, offering a means of escaping or making a final stand when low on resources. Other pants instead let the player initiate fights with increased effectiveness, allowing them to whittle down the enemy's numbers before they can react. Other aspects include but are not limited to: more melee damage, use of Health as Salts, decreased shield recharge delay, and faster recharge of the shield.

Though most Gear drops are randomized (even when looting Gear from Handymen), certain pieces of Gear only spawn in specific locations. They are the following:

There are certain Gear drops located close to checkpoints where it may be advantageous to reload the checkpoint until you get the desired Gear. Recommended locations are as follows:

Gear is provided by the Columbian Sundry and Supply vending machine, which can be accessed between the rounds.

In contrary to BioShock Infinite, all Gear in Burial at Sea - Episode 1 spawn at a specific location.

Protecto-Gear, an early version of Gear.

Models for the unused Protecto-Gear by Paul Presley. 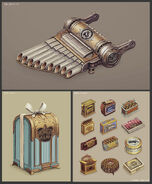 Concept art for the Gear (and the Whistler and ammunition).

Image from a scrapped store that sold Gear.

A diagram showing an example of a Gear loadout in a Clash in the Clouds gameplay demo.

An unused Gear Icon for an unknown, likely removed Gear.

An Atlas found in the game files linking to both Gear and Nostrums. Icons for Coat of Harms and Fit as a Fiddle are seen here.

Urgent Care, one of the Gear items Booker may come across.

A Gear in Rapture.