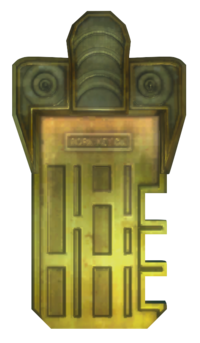 A Genetic Key is a card-like device that can unlock doors and operate machinery in Rapture specifically controlled by a person's genetic code.

In BioShock, the first major appearance of a genetic key is in the Medical Pavilion: Jack can only enter the Chomper's Dental offices by acquiring Telekinesis in order to retrieve a genetic door key through a broken window. In the same area, Dr. Steinman's key is needed to end the security lockdown over the Pavilion and its emergency Bathysphere. Later in the story, Jack accesses the Farmer's Market by recovering the key to Arcadia's gates from the safe of Professor Langford.

The most important genetic key in Rapture is the one held by Andrew Ryan; it gives him control over Rapture's Security Devices, Bathyspheres, and even the Splicers through the controlled release of pheromones into the air vents. After Andrew Ryan's death, that genetic key is shown being used in one large control console in Rapture Central Control to stop a self-destruct and to turn control of the city over to Atlas/Frank Fontaine.

In BioShock 2, the first appearance of a genetic key is an override key in the control booth in the Atlantic Express station at Ryan Amusements.

The first key the player has to obtain is in Pauper's Drop where Subject Delta needs the override key in Grace Holloway's possession to override the security lockdown blocking further passage of the Atlantic Express train.

Delta must then get a genetic key from Simon Wales to drain the water from Dionysus Park at Pumping Station 5 and save Augustus Sinclair from the leaking train car.

Later in Fontaine Futuristics, Delta must get a gene sample from a heavily mutated Gilbert Alexander in order to create a genetic key to access the secret entrance to Persephone. To lure him close enough to the wall of the tank, Delta must collect a bunch of plants infused with ADAM.

Finally, Delta must also get a genetic key from Augustus Sinclair, who has been turned into Subject Omega by Sofia Lamb. This key will enable Delta to override the lockdown caused by Sofia Lamb in Persephone, which will then give Delta and Eleanor Lamb access to Sinclair's lifeboat. 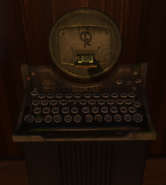 One of the machines controlled by the key.