Alex the Great
Gil
Mister A

“The end may be nigh, but for me it's just more paperwork.”
― Gilbert Alexander[src]

Dr. Gilbert Alexander[2] was a scientist who worked for Frank Fontaine and later Andrew Ryan. Alexander developed the impractical Pair Bonding mechanism between Alpha Series Big Daddies and Little Sisters, starting with Eleanor Lamb and Subject Delta, in whose creation he was also heavily involved.

Alexander was an ambitious researcher in the early days of Fontaine Futuristics, specializing in mechanical and robotic engineering. At the height of his career, he designed much of Rapture's automated security systems[3] and was influential in the creation and advancements of Big Daddies,[4] modifying their suits with gadgets and armor. Like many scientists who worked for Fontaine, Alexander was likely forced to work for Ryan Industries or be imprisoned at Fontaine's Department Store.

Based on Suchong's work (which he believed to be inadequate),[5] Alexander created the Alpha Series, a new type of Big Daddy that was meant to serve as the Little Sisters' constant guardian. It was this role that ultimately gave the Big Daddies their nickname. It also inspired Alexander to develop the Pair Bond: a bond that forced an Alpha Series to protect a single Little Sister with their life.[6] Unfortunately, however, the Pair Bond turned out to be a failure. In Alexander's own words, it "simply worked too well". The Alpha Series Protectors became dangerously unstable after losing their bonded Sister, either because she had been killed or because she had been turned human again.[7] From then on, Alexander worked on the Protector Program using older Big Daddy models and a more suitable bonding method. He also worked on the creation of the Vita-Chamber with Augustus Sinclair and Suchong.[1]

After the war, Alexander and the remaining scientists began working for Sofia Lamb. During this time, he created the Rumbler[8] as well as the Big Sister suits.[9] Once highly committed to his job, he came to regret his actions and eventually joined the Rapture Family. Lamb used his guilt to manipulate him into volunteering for an experiment of her own,[10] which she named "the New Utopian project". Based on Jack's mental conditioning (as Sofia believed it to be), the subject of the operation would be imbued with the entire collective genius of Rapture via ADAM infusion, suppressing their own personal identity.[11] The plan failed, and Alexander was heavily mutated and rendered quite insane by the enormous amounts of ADAM injected into him. Seeing that he was no longer useful to her, Lamb cruelly abandoned him[12] but left him in control of the Fontaine Futuristics headquarters.

Post-mutation Gil, now calling himself "Alex the Great", manipulates his surroundings using a modified Security Bot, which he controls via four hijacked Bot Shutdown Panels. The Bot itself is distinguished by its added television monitor, displaying Gil's manic eyes, and distinctive violet running lights. Alex the Great spends most of his time "running" the Fontaine Futuristics business and manages his spliced "employees" by sadistically punishing them.

Before losing his mind, Gil recorded audio logs with instructions for gaining access to the inner areas of Fontaine Futuristics. In these logs, he also asks anyone who might find them to end his life. However, Alex the Great uses his modified Security Bot (and surprisingly operatic singing voice) to prevent Delta from accessing the Security Office and, by extension, his hideout. After destroying all four of Alex's signal relays, the otherwise invulnerable Security Bot is neutralized. Subject Delta is finally able to enter the Security Office, listen to Gil's next message, and unlock the door that leads to the hidden laboratories.

After crossing the ocean floor, Delta enters a pitch dark laboratory and finds the scientist in a massive tank for deep sea life. Another of Gil's old messages instructs him to gather a bunch of plants infused with ADAM, a delicacy that his spliced self cannot resist. Using four ADAM-infused plants, Delta manages to lure Gil close enough to the glass wall of his lair so a sample of his DNA can be taken. Shortly thereafter, a key is printed, allowing Delta to open the hidden doorway behind the Oxy-Fill station outside. Having now been granted access to Persephone, the player is left to decide Gil's fate.

Following Dr. Alexander's long-previously recorded guidance, the player is ultimately given the choice to electrify Alex's holding chamber through its sample disposal system, fulfilling Gil's wish to die, or spare him, for which his ADAM-produced alter ego, Alex the Great, now begs. For the purposes of the ending, killing Alexander is treated the same as killing the two other NPCs Grace Holloway and Stanley Poole, even if one does it out of a sense of mercy.

Subject Delta's encounter with Dr. Alexander is represented by a statue in the Little Sister's version of the Cell Blocks of Outer Persephone. If the player chose to kill Gilbert, the statue depicts Subject Delta battling a giant serpent (representing Alex the Great). If the player chose to let Gilbert live, the statue depicts Subject Delta pulling a man (presumably Dr. Alexander) out of the mouth of the giant serpent (again representing Alex the Great).

From the audio diaries recorded prior to his mutation, Gilbert Alexander was unobtrusive, self-effacing, and remarkably soft-spoken. A subtle presence despite his impressive achievements, Alexander nonetheless exhibited the same lack of scientific ethics that defined the city's intellectual elite, conducting monstrous experiments on unwilling test subjects to create the Big Daddies and readily taking part in the brainwashing of the Little Sisters with no visible signs of guilt.

However, he eventually experienced a great epiphany that made him feel remorse for his actions, and resolved to make amends as best as he could, helping restore Eleanor Lamb from her Little Sister conditioning to some semblance of normality, but unfortunately, this personal revelation was deliberately manipulated by Sofia in order to encourage his loyalty to her cult, and under her command, he gladly continued his experiments - this time believing that he was in service to the greater good. Despite this indoctrination, he nonetheless held no illusions over his abandonment by Sofia in the wake of his hideous mutation by way of excessive splicing: though audibly depressed by his ongoing loss of sanity, he refused to lose composure even during his final days, ultimately setting out to arrange his assisted suicide - hoping that his future killer would be able to save Eleanor from the same fate he suffered.

In sharp contrast, "Alex the Great" is a cackling, cruel lunatic. He gleefully kills dissenting Splicers in his command under the guise of a corporate disciplinarian, burning the words "YOU'RE FIRED" onto any available surfaces for emphasis. He regards execution as legal dismissal and an ambush on Delta as simply escorting him out of the building, views Delta's attempt to use a bot shutdown panel as an attempt to steal his job, and egotistically proclaims his own voice copyrighted company property; He even conducts battle royale-style "demonstrations" of Fontaine Futuristics Plasmids with the air of a dedicated advertising showman, electrocuting corpses among the audience of Splicers in an attempt to get them to participate. 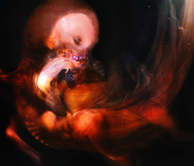 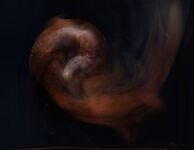 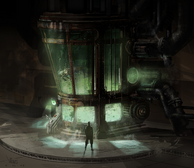 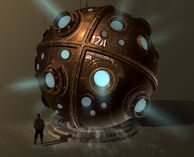 Concept art of Alexander's tank in a sphere shape. 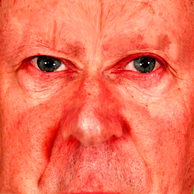 Gilbert's face on his Security Bot. 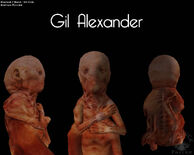 Gilbert Alexander's Statue in Outer Persephone if his life is spared.

Gilbert Alexander's Statue in Outer Persephone if the player kills him.
Add an image to this gallery 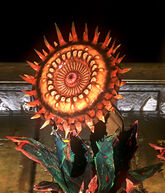 The plants required to lure Gil out of hiding.

Alex the Great's demise.
Add an image to this gallery

Retrieved from "https://bioshock.fandom.com/wiki/Gilbert_Alexander?oldid=320213"
Community content is available under CC-BY-SA unless otherwise noted.