Transcript: Mother has destroyed Doctor Alexander... she tried to splice him into some kind of living saint who would calculate the common good and adhere to it tirelessly. But now he's become... something unspeakable. Mother's philosophy is just as corrupt as Ryan's. By her standards, it would be better to have the entire world equally miserable than to allow us to strive in our own behalf. I have to get out of here.

Location: By a Little Sister Vent in the upper level of the Live Test Facility. 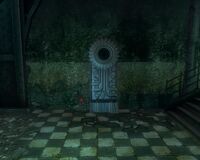 Retrieved from "https://bioshock.fandom.com/wiki/Goodbye,_Dr._Alexander?oldid=292557"
Community content is available under CC-BY-SA unless otherwise noted.