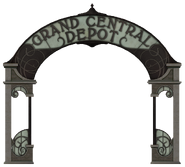 Grand Central Depot is the opulent primary transit station for Columbia. It offers a gondola connection between Port Prosperity Station and the Financial District of Downtown Emporia for the Emporia area. Its large interior houses waiting areas, ticketing offices, shops, and restaurants. 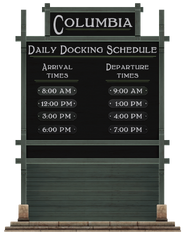 By the time Booker DeWitt and Elizabeth reaches the depot, it has become a Vox Populi stronghold.

After a strange encounter with the Lutece Twins on the gondola from Port Prosperity Station, Booker and Elizabeth disembark at the dock at the Grand Central Depot to head to Comstock House. Unsurprisingly, the Luteces have vanished, leaving the gramophone blaring "Shiny Happy People" on the billboard ledge. 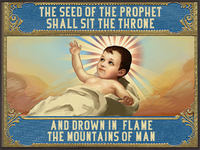 After going up the stairs past steamer trunks and other abandoned luggage of the fleeing upper-class citizens of Emporia, Elizabeth comes across a cherubic poster of herself as an infant stating "The Seed of the Prophet Shall Sit the Throne and Drown in Flames the Mountains of Man". She remarks that Father Comstock was grooming her for his own ends. Signs of a great struggle abound further up the stairs with bodies, scattered debris, and crumbled iron gratings; all signs of the firefight that had erupted when the Vox attacked the Founders.

“Excuse me… if there is anyone who can hear the sound of my voice… These are dire times and I could ever so use your aid… I hope no one has forgotten about me here… Er, ah… Now, back to the music…”
― Columbia Radio Announcer[src]

There are several Ticketing areas for people to get schedule information or to book passages on connecting areas. The first has two Vox Populi members pausing to enjoy a smoke amongst the corpses. A Minuteman's Armory and a Veni! Vidi! Vigor! Vending Machine are set up across from the closed down restrooms. Behind the counter of the ticketing booth is a Safe with a back room containing a Hail Fire. A Lockpick can be found on the desk next to a radio and a phial of Salts. The announcer pleadingly asks for assistance amidst reports of gunfire. He promises to keep up the music, but the broadcast fades into static.

Shortly after exiting the booth, Booker comes across two more Vox Populi members rounding the corner. The connecting corridor is strewn with more abandoned luggage. Branching routes are gated while fires rage in the closed-off passageways. Suddenly a radio crackles to life with a new Vox announcer issuing orders to shoot on sight.

A stabbed corpse is draped on a trunk with his arms bound to strips of the tattered red curtains. "The Founders Will Bleed!!!" is written on the window above with blood while one of Preston E. Downs' Voxophones can be found at its feet. Further along is another well-lit atrium with a Dollar Bill machine on the far wall. A small ticketing booth contains a Safe with a Heater in the back.

After climbing the stairs, Booker and Elizabeth come across a citizen engaged in a forced dance with a Vox Populi member. They waltz on a luggage cart overseen by a statue of Columbia with a Fireman and more Vox clapping in amusement. A Tear for a Gun Automaton is available for Booker to use. Two more ticketing booths are on the far side of the room closed and shuttered with a Minuteman's Armory stationed nearby in the corner.

The aptly named oyster bar was a popular destination for both travelers passing through and employees who worked daily at the Grand Central Depot. The Oyster was a stately yet comfortable place to enjoy a drink or grab a bite to eat. Though Booker can access this area when Elizabeth lockpicks the door, backtracking is required from Founders Books to gain access to the hidden back room which contains an Infusion and a bottle of Return to Sender.

The vast atrium is what truly gives the Grand Central Depot its name. A statue of Comstock dominates the space. However, it is now festooned with red fabric as a Vox Populi member throws a grenade to set the sculpture alight. Vox agents will try to overrun Booker along with a with an Abraham Lincoln-modified Motorized Patriot and several Firemen. Tears are available containing Tesla Coils, Medical Kits, Cover, a Crank Gun, and a Volley Gun scattered around the concourse. The Ticketing booths contain a Safe. One of the back rooms contains an RPG and a Voxophone by Rosalind Lutece on top of the newspaper stacks. A Columbia Creamery store is visible among the shops but is shuttered. Civilian bodies litter the area, some lined up against a wall and shot execution style. The door to the connecting elevator to Emporia is locked which Elizabeth can open with a hairpin.

Departures and the Columbia Gondola[]

The area is guarded by two Vox Snipers on the balcony. Booker can summon a Tear for Cover or a Freight Hook for direct confrontation. Hidden in an alcove on the bridge is a Minuteman's Armory.

A Founders Books store is located within the Grand Central Depot. Like at all the other bookshops in the franchise, this store sold propagandistic reading materials with the hope that the youth of Emporia would become indoctrinated on the Founder's ideology at an early age.

Upon approaching the one-way turnstiles, Elizabeth will mention going to the bookstore before leaving. The area contains a Dollar Bill and a Veni! Vidi! Vigor! machine flanking the entrance. The pair come across Ronald Frank's desperate Voxophone Sally!. Concerned for the hostage's safety, Booker and Elizabeth discuss returning to The Salty Oyster. Finding the Voxophone inside is required to access the backroom of the bar. 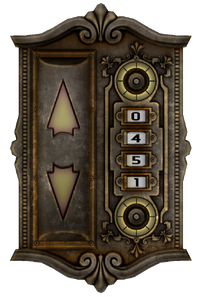 “No, that is an oath you cannot keep. But promise me that if it comes to it, you will not let him take me back.”
― Elizabeth[src]

The one-way turnstiles lead to Downtown Emporia. However once inside, Booker and Elizabeth observe that the elevator is maintained with a "dual-dial lock." Elizabeth will remark that most fools will keep the combination no more than twenty feet away.

As Booker searches through a pile of books, he wonders aloud why a person would be so interested in lockpicking and codebreaking. Elizabeth retorts that they are relevant interests to a person locked in a cage. Booker finds the code written on a clipboard while Elizabeth declares that she won't be locked up again. Suddenly, Elizabeth grabs Booker's hand and puts her finger to her lips. A curtain pulls to reveal a hidden recess in the wall with a whistling statue of Comstock. Quickly, they duck under the counter just as the Songbird appears at the window, scanning the room for the presence of its missing ward.

Relieved but drained, Elizabeth rushes over to elevator lock. Booker promises that he will do anything to stop the Songbird. Elizabeth is somber and unmoved. She adamantly states that a promise is not enough, and that if faced with returning to the tower or death, she'd choose the latter option.

A Fireman attacks Booker near the ticketing booths.

The code for the combination lock.