In BioShock Infinite's DLC, Burial at Sea - Episode 1 and Episode 2, grenades can be obtained as rare loot but serve no purpose as none of the weapons found in the DLC can utilize them. Their icon resembles the BioShock 2 frag grenade. [Confirmation Needed] 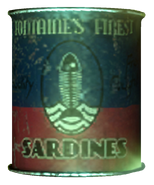 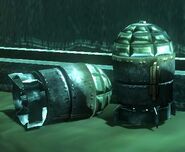 A pair of Frag Grenades from BioShock 2.

An undeployed Proximity Mine.

Renders of the Grenade model from BioShock: The Collection. #1