The Gunsmith Shop, or Chen-Lin's Shop, is a business located within the Plaza of Zeal of Finkton, Columbia. It is where Chen Lin and his wife reside.

Since 1905, Chen Lin has been known as the best weapons manufacturer in Columbia. Due to his proficiency, he accrued enough money and respect to open his own shop within Finkton Proper. The business consists of a multistory building with its own smelting furnace at the bottom. Though many of Columbia's citizens were wary of Vigors, Lin used Devil's Kiss to light the furnace. A devout man, Lin set up a Buddhist shrine on the upper floor of the facility.

Booker and Elizabeth are forced by Daisy Fitzroy to collect weapons from Chen Lin in exchange for The First Lady Airship, which Fitzroy has expropriated in the name of the Vox Populi. After making their way to Finkton, they enter Lin's workshop. On the top floor, they come across a lockpick and tools for making weapons, but find that Chen isn't there. However, they do find May Lin weeping as she prays to Gautama Buddha for Chen's safe return. She reveals that her husband has been arrested by the Flying Squad for his connection with the Vox and is imprisoned at the Good Time Club. She wonders why Daisy Fitzroy has yet to help Chen.

Booker and Elizabeth head out to the club, but later return after entering a Tear to an alternate Columbia. When they return to Chen's workshop, they immediately notice an eerie silence has fallen over the place. They observe other changes: the Buddhist shrine they had seen earlier is now a shrine to Comstock, the equipment from the workshop is missing, and Chen Lin himself is alive, but is apparently affected by his "resurrection."

Returning back downstairs, the pair finds Mrs. Lin is now the Caucasian Sarah Lin. Sarah is shattered by Chen's disturbed state and posits that he must be devastated since his tools have been confiscated by the police and taken to the impound in Shantytown. When Booker and Elizabeth locate the tools and realize they have no way of transporting them, they open a Tear to a third reality where they believe the tools are back at Lin's shop, allowing him to successfully provide the Vox with their weapons.

Upon visiting the workshop for the final time, Booker and Elizabeth find both Chen Lin and Mrs. Lin murdered together at the entrance of their workshop. It has transpired that the Vox Populi no longer need Chen's weapons, as Elizabeth has opened a Tear where, in this universe, they already have weapons for an uprising. 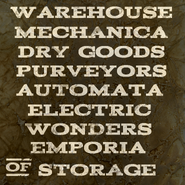 The Mechanica sign among unused signs in the game files.
Community content is available under CC-BY-SA unless otherwise noted.
Advertisement